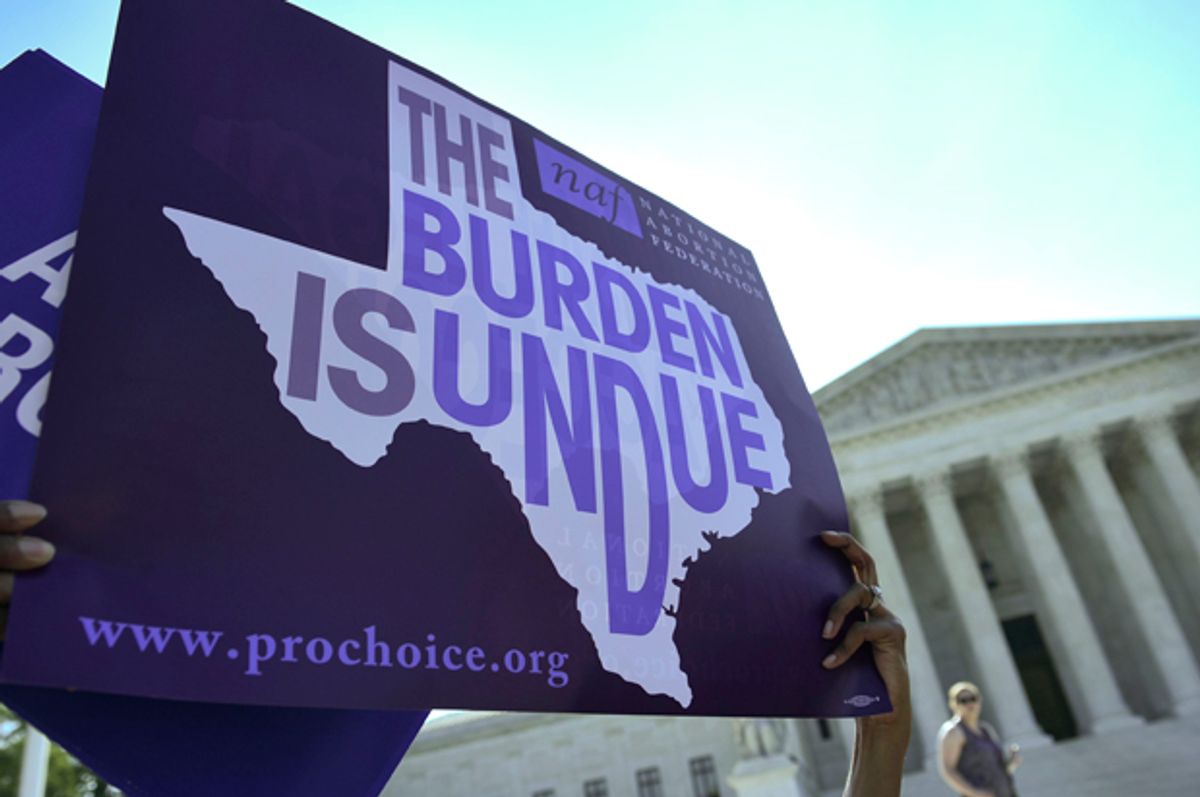 An abortion rights activist holds placards outside of the US Supreme Court before the Court struck down a Texas law placing restrictions on abortion clinics on June 27, 2016 in Washington, DC. (Getty/Mandel Ngan)
--

It's time to abandon any hope that the anti-choice movement would wither away and give up after the Supreme Court struck down a broad set of anti-abortion regulations last June. The war on women has long been a war of attrition. Conservatives are the Energizer bunnies of misogyny, hoping to simply wear down their opponents by overwhelming them with so many anti-choice regulations that feminists simply stop fighting for women's health and equality.

Nowhere is this more evident than in the special legislative session called this summer by Texas Gov. Greg Abbott. As with the one called by former Gov. Rick Perry in 2013 that resulted in the doomed anti-abortion law, this special session has been heavily focused on Republican outrage that conservatives cannot control other people's genitals, and their efforts to rectify that. Along with a "bathroom bill" designed to prevent transgender people from using public facilities in peace, Republicans have introduced a dizzying number of bills attacking access to abortion, contraception and other sexual or reproductive health services.

“It’s frustrating," said Dr. Dana Kusnir, a doctor who provides abortion services in the Dallas area and works with Physicians for Reproductive Health. "We put so much into this big fight" on the 2013 abortion law, "something that went all the way to the Supreme Court." Republicans, Kusnir continued, "are refusing to take that message to heart, a message that was handed down by the highest court in our country."

This week alone, the Texas senate is considering four bills undermining sexual health care access: A bill banning local governments from contracting with Planned Parenthood, a bill banning insurance coverage of abortion, a bill putting onerous reporting requirements on doctors that appears to be a paperwork trap, and a bill demanding overly thorough reporting on the details of abortions performed on minors.

The last bill doesn't yet demand that doctors turn over naked pictures of teenage girls to be examined by Republican legislators, but at the rate the special session is going, I wouldn't count that out as an amendment.

Texas senators gaveled in at 10 a.m. on Tuesday morning and stayed until the early hours of Wednesday — destroying health care access has quite the stimulative effect on Republican energy levels — to vote through the bill barring local and state government agencies from contracting with Planned Parenthood.

As they usually do with bills like these, Republicans spent their time jabbering about abortion. But as with every other Republican attack on Planned Parenthood, this legislation actually has nothing to do with abortion. In fact, a report released this month, using data collected by Texas A&M University, shows that the abortion rate among teenagers in Texas rose after the state forcibly closed down more than 80 family planning clinics. Not that the anti-sex brigade is really worried about more abortions, as long as they can feel satisfied that young women are being punished for having sex.

Furthermore, local and state governments do not contract with Planned Parenthood to provide abortions, but only for other health care and education-related services. For instance, Planned Parenthood has a sex education curriculum it is sometimes asked to use in schools and other community service programs.

Local governments also enlist Planned Parenthood's help for community health programs, as Houston Mayor Sylvester Turner explained in a letter to the Texas Senate, noting that cities use contracts with community partners like Planned Parenthood to fight Zika, HIV or STD outbreaks and citing the case of Scott County, Indiana, which "experienced an HIV outbreak after the local Planned Parenthood health center closed."

Despite the right-wing radicalism on display and the threat of contagious disease outbreaks, the national news media paid almost no attention to the passage of this bill. Part of the problem is simply bandwidth, of course. The U.S. Senate is currently trying to terminate health insurance for millions of Americans, which is a much bigger deal than Texas Republicans' slow-burn efforts to eradicate sexual health care in their state, one condom at a time. And then there's the ongoing national emergency of having a corrupt wannabe dictator who might be indebted to the Russian government in the White House.

But another problem is what Brian Beutler of the New Republic has argued is the media's ingrained bias "toward what you might call 'new news'" or "things we didn’t know before, but do know now." I'd also argue that consumers of news share the same bias — if anything, the reason journalists are biased towards "new news" is because they know readers are unlikely to click on anything else.

Anti-choice activists and politicians are betting that they have more energy for hating women than liberals have for defending women. And make no mistake, this is a conscious strategy.

"Multiple anti-abortion advocates told BuzzFeed News that often they will encourage lawmakers to introduce bills that may not have a single hope of passing their state’s legislature that session, merely to start increasing public familiarity" and dampen resistance, Ema O'Connor at BuzzFeed wrote in a recent piece about "abortion fatigue."

Anti-choicers claim that the repetitive nature of this assault is about "education," but in truth the tactic is more reminiscent of the behavior of abusers and authoritarian leaders, who keep dishing out so much awfulness that their victims finally go numb and accept of it. Abortion opponents also strategically go after the most vulnerable and disempowered women, by seeking to close abortion clinics in rural areas and attacking contraception services for low-income women.

Still, while media interest wanes, pro-choice activists are exhibiting determination. Planned Parenthood saw a post-Trump surge in donations, and sources in the pro-choice movement say they are seeing high levels of activist energy. The Women's March, in particular, created a sense that the resistance is female, and attacks on women's health care are not going unnoticed.

“We just see the same thing over and over again," Dr. Kusnir said. "This is their tactic. But we’re not going to give up.”