Trump supporter threatens Muslim women at Walmart: “We’re going to kill every one of you f***ing Muslims”

“Why are you in our country anyway,” a North Dakota woman grilled three young Somali women 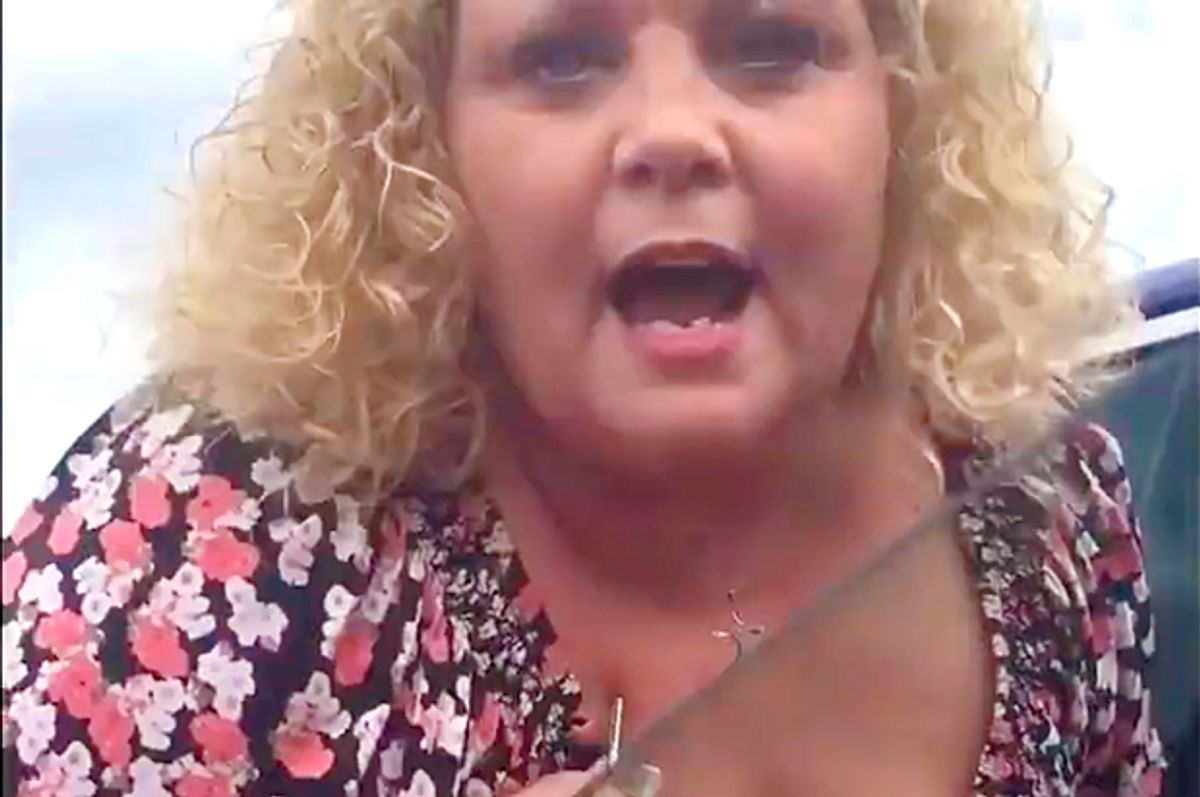 After a North Dakota woman in a Walmart parking lot was caught on video telling three Somali women that "we’re going to kill every one of you Muslims," she apologized -- and also lost her job.

According to the New York Daily News, Amber Hensley of Mapleton of North Dakota was captured on video Tuesday letting out an expletive-laced tirade, complaining that the girls parked too close to her car.

After one of the women calls her "a racist person" Hensley can be heard replying, "No, I'm American."

"She called me from the window and told me, 'come on, fix the parking,'" Leyla Hassan, one of the girls in the car, told local North Dakota news station KVVR.

"She started talking about my sister’s eyes, because she has like, crossed eyes," Sarah Hassan of Minnesota explained. "I was like, why are you saying this stuff to my sister?"

Sarah added: "Actually, this kind of discrimination happens every single day to all people here. She started threatening me that she’s gonna kill us. That’s when I had to take out my phone and I started recording everything there."

Hassan told the woman she was taping the incident and would show the footage to police.

Hensley argued that she didn't care.

"Do you think the police care?" Hensley said in the video.

Hensley alleged that the girls' car was parked in a way that prevented her from getting into her own car. After asking them to move, she said they called her a "fat bitch" to which she informed them she was a Christian and asked them if they knew who Jesus was. As Hensley described the incident, one of the women "said fuck Jesus and I lost it!"

According to the Daily News, Hensley pointed to a bumper sticker supportive of President Donald Trump during her tirade.

"But there are absolutely no excuses," she said in a Facebook message to KVVR. "I would first like to apologize for the horrible things that I said to the two ladies at Walmart. It was not a Christian like thing to do AT ALL and wish I could take it back, but I lost my cool and I can’t. I am terribly sorry. I just wish that the whole video could be shown," she said.

"I am in tears with regret and will take any form of punishment deemed fit," Hensley told KVVR.

The Daily News reported that Hensley lost her job as an administrative assistant at the accounting firm Horab & Wentz, which said it was "flooded with calls and emails," about Hensley's behavior.

"Horab & Wentz does not agree with or support the statements expressed by Amber Hensley in the recently posted video," a statement from the company said, according to the Daily News. "Ms Hensley is no longer employed with Horab & Wentz effective immediately."

The Associated Press reported that the Fargo police are investigating the incident. Hensley has also been invited by the Minnesota chapter of the Council on American-Islamic Relations to meet with members of the Muslim community in Fargo.