"Drunk, obnoxious, smart but not pretentious": The long, low history of the word "punk" 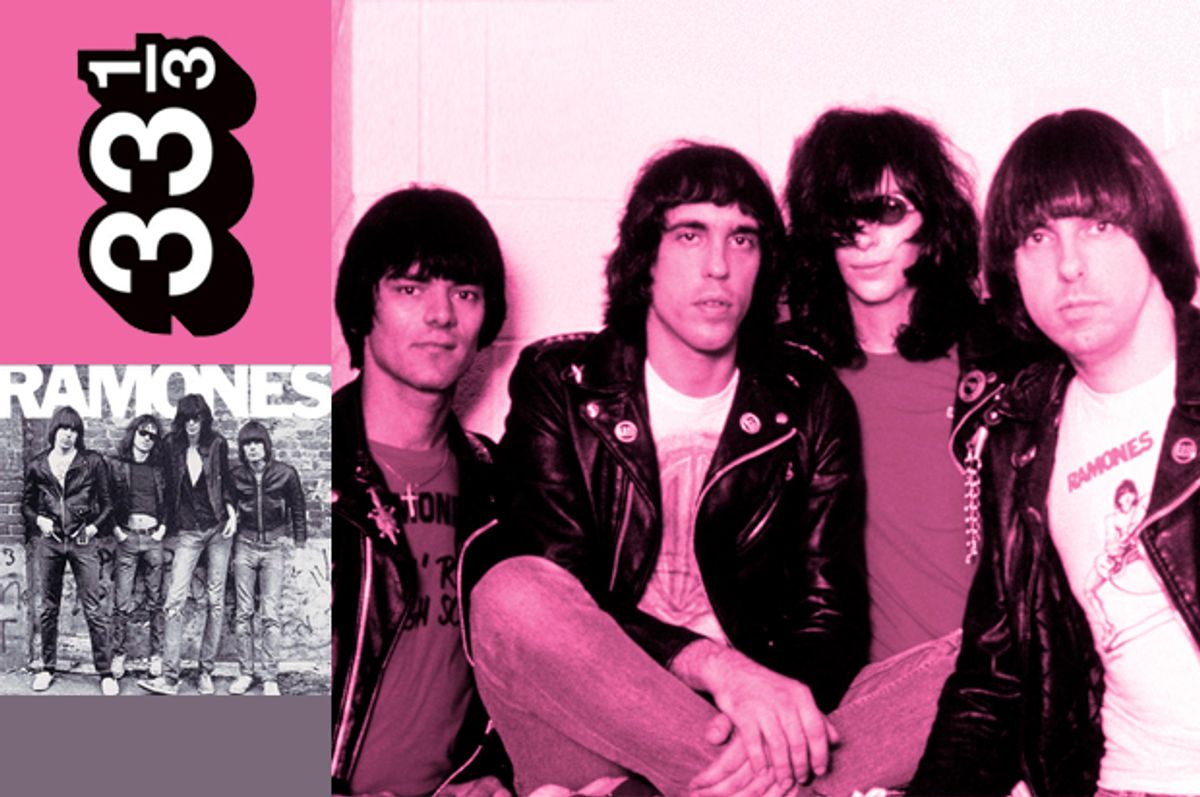 Excerpted from "The Ramones' Ramones" by Nicholas Rombes (Continuum, 2005). Reprinted with permission from Bloomsbury Publishing.

While it's true that debates about the origins of the term "punk" to describe the scene can quickly devolve into triviality, the confusion surrounding the term is central to punk's anarchic spirit, a confusion that is important to maintain, rather than resolve. Originally, "punck" was used to describe a prostitute or harlot; in 1596—the first known appearance of the word in print—the writer Thomas Lodge used the word like this: "He hath a Punck (as the pleasant Singer cals her)." Over the centuries, the meaning of the word has evolved, variously used to describe something worthless or foolish, empty talk, nonsense, a homosexual, or a person of no account.

More recently, in the decades prior to the emergence of the punk music scene, the word punk can be found scattered throughout novels and stories by the likes of Ernest Hemingway, William S. Burroughs, and others. In Hemingway's story "The Mother of a Queen" from his collection Winner Take Nothing (1933), the narrator says "this fellow was just a punk, you understand, a nobody he'd ever seen before ... " Dashiell Hammett's novel The Maltese Falcon (1930) features a scene where Sam Spade tells Gutman "we've absolutely got to give them a victim. There's no way out of it. Let's give them the punk." In Burroughs's first novel Junky (1953), the narrator observes as two "young punks got off a train carrying a lush between them." And Thomas Pynchon uses the term in V. (1963) like this: "There was nothing so special about the gang, punks are punks."

The word punk in relation to music is both trickier and easier to trace; while pretty much everyone now knows punk when they hear it, in the late 1960s and early 1970s, the term had not yet taken on the coded weight of meaning that it carries today. In his first nationally published work—for Rolling Stone in 1969—Lester Bangs reviewed the MC5's album Kick out the Jams, and wrote, "never mind that they came on like a bunch of sixteen-year-old punks on a meth power trip." In May 1971 Dave Marsh, writing in Creem, used the phrase "punk rock," and the following month in the same magazine in his essay "Psychotic Reactions and Carburetor Dung," Bangs, writing about the influence of the Yardbirds, said that "then punk bands started cropping up who were writing their own songs but taking the Yardbirds' sound and reducing it to this kind of goony fuzztone clatter." Punk, as associated with rock and roll, gradually gained currency, so that by 1974, the word could even be found in the rarefied pages of none other than The New Yorker. Reviewing a New York Dolls concert at the Bottom Line in May 1974, Ellen Willis wrote, in reference to opening act Suzi Quatro, "I was getting a naïve kick out of watching a woman play rock-and-roll punk." And writing in the Village Voice in November 1975, just a little over a month after the Ramones had signed with Sire, Greil Marcus, in reviewing Patti Smith's debut album Horses, wrote that "the concepts that lie behind Smith's performance—her version of rock and roll fave raves, the New York avant-garde, surrealist imagery and aesthetic strategy, the beatnik hipster pose, the dark side of the street punk soul—emerge more clearly with each playing, until they turn into schtick."

Yet even this coupling of "punk" and "rock" didn't yet capture the meanings we associate with punk rock today. It wasn't until 1976, and the founding of the magazine Punk by John Holmstrom and Legs McNeil, that the term adapted once again to capture and give name to the emerging scene. As Legs McNeil tells it [in the book Please Kill Me], "Holmstrom wanted the magazine to be a combination of everything we were into—television reruns, drinking beer, getting laid, cheeseburgers, comics, grade-B movies, and this weird rock & roll that nobody but us seemed to like: the Velvets, the Stooges, the New York Dolls, and now the Dictators." In fact, the group The Dictators and their 1975 album The Dictators Go Girl Crazy! were a direct inspiration for the magazine's title. Not only did they use the word punk in the song "Weekend" ("oh weekend / Bobby is a local punk / cutting school and getting drunk / eating at McDonalds for lunch"), but an inside sleeve picture of them dressed in black leather jackets eating at White Castle led McNeil to suggest Punk as the title: "The word 'punk' seemed to sum up the thread that connected everything we liked—drunk, obnoxious, smart but not pretentious, absurd, funny, ironic, and things that appealed to the darker side."

One of the best discussions of the punk ethos appeared in the very first issue of Punk in January 1976 in the essay "Marlon Brando: The Original Punk." Suggesting that punk is above all a sensibility, a way of carrying yourself in the world, the piece suggests that Brando's films Streetcar Named Desire (1951), The Wild One (1953), and On the Waterfront (1954)" provided media recognition for an inarticulate, rebellious character type, til then ignored by the popular media .... Brando was cool without oppressing the audience with too much sharpness. He was powerful without having to be invulnerable .... Vulnerability in a leather jacket. Brando prowled, not as a predator, but as a formidable victim." The Ramones, especially, embodied this cool style that reversed the governing codes of 1970s macho rock embodied by the figure of the swaggering lead singer. Joey Ramone was the punk underdog, the impossibly skinny guy who hid beneath his hair and behind his sunglasses. In that same issue of Punk, in her two-page spread on the Ramones, Mary Harron was hesitant to use the word punk to describe the band (preferring instead "punk-type"), and when she did use it, she did so to describe a visual style and attitude, not a sound: "OK," Harron asked, "why do you affect leather jackets and kind of a punk-type attitude on stage?" Tommy replied: "It keeps us warm, y'know? And the black leather absorbs more heat."