We need better than "A Better Deal": Democrats' real problem isn't their messaging — it's their politics 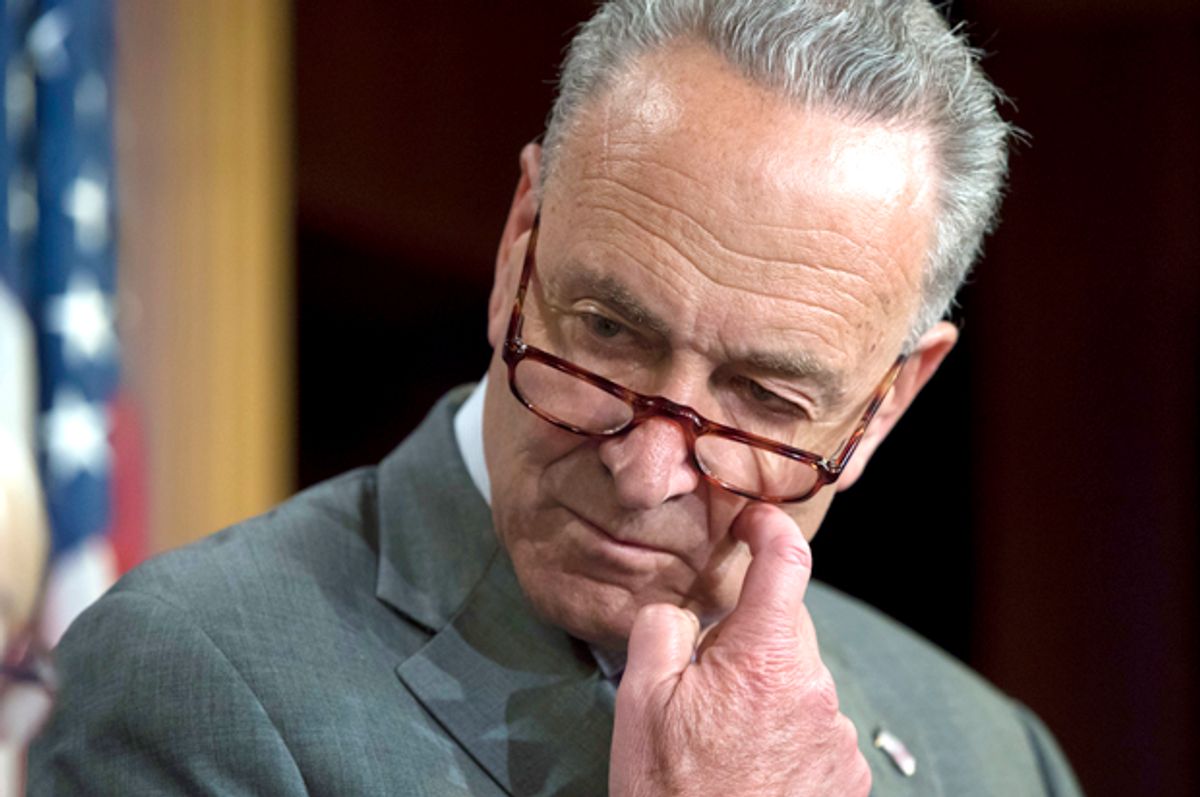 More than eight months removed from last year’s election, the Democratic Party leadership unveiled a new economic agenda on Monday in hopes of rebranding the party as populist. With a brand new slogan that sounds vaguely familiar to a famous pizza commercial — “A Better Deal: Better Jobs, Better Wages, Better Future” — the Democrats put forward several new policies that should please progressives, including increasing the minimum wage to $15 an hour, a $1 trillion infrastructure program, and a plan to let Medicare negotiate drug prices with pharmaceutical companies (all staples of Bernie Sanders' 2016 campaign). In the coming months, more policies will be proposed, and according to Senate Minority Leader Chuck Schumer, even single-payer health care — which has received an increase in public support over the past year — is on the table.

This new agenda was introduced about a week after a Washington Post poll  revealed that only 37 percent of Americans say that the Democratic Party “currently stands for something,” compared to 52 percent who say the party just stands “against Trump.” Not surprisingly, then, Democrats are eager to convince voters that they actually represent something (other than anti-Trumpism) and understand the concerns of working people. This won’t be easy, considering that two-thirds of Americans — according to another Washington Post poll from April — think the Democratic Party is out of touch with the concerns of most people (that result included 44 percent of Democrats and 75 percent of independents).

In part of an effort to promote the new platform and persuade voters that the Democrats have learned from last year, Schumer wrote an op-ed for the New York Times last Monday, in which he adopted a more populist tone. “Americans are clamoring for bold changes to our politics and our economy,” the New York senator wrote. “They feel, rightfully, that both systems are rigged against them, and they made that clear in last year’s election. American families deserve a better deal so that this country works for everyone again, not just the elites and special interests.”

This represents a clear shift in tone for Democrats, who have been reluctant to fully embrace the populist style of Sanders over the more reserved centrist positions represented by Hillary Clinton. It is peak irony, however, to hear this kind of language coming from Schumer, who has long been the Democratic Party’s top fundraiser on Wall Street, and in many ways epitomizes everything that is wrong with the party and American politics in general. But Schumer, ever the political pragmatist, clearly grasps today’s populist mood, and the minority leader has acknowledged — unlike many of his party members — that the Democratic Party is largely to blame for its political misfortunes.

“When you lose an election with someone who has, say, 40 percent popularity,” said Schumer during an appearance on ABC’s "This Week" last Sunday, “you look in the mirror and say, 'What did you do wrong?’”

One has to give credit to the New York senator, who has been one of the highest-ranking Democrats willing to accept responsibility for last year and criticize his own party. But there is a fundamental flaw in his  diagnosis. After eight months of reflection, Schumer and the Democratic leadership appear to believe that the party’s major problem was simply bad messaging. “The No. 1 thing we did wrong is we didn't tell people what we stood for,” Schumer said during his ABC interview.

Of course there is some truth to this, and looking at the Clinton campaign alone proves this point. Though Clinton defenders often tell critics that her campaign put forward a detailed policy agenda, the fact is that the campaign put little energy into promoting those policies. Indeed, a March analysis by the Wesleyan Media Project found that only 25 percent of the Clinton campaign’s advertising went after her opponent on policy grounds, while the rest was devoted to personal attacks. “By comparison,” notes Jeff Stein in Vox, “every other presidential candidate going back to at least 2000 devoted more than 40 percent of his or her advertising to policy-based attacks. None spent nearly as much time going after an opponent’s personality as Clinton’s ads did.”

Bad messaging, then, is obviously an important factor in the Democratic Party’s current plight. But to say that messaging is the main problem for Democrats is a sign that party elite haven’t truly learned from last year, and believe that the party’s collapse has more to do with ineffectual marketing than old-fashioned politics (or lack thereof). If the party can simply come up with better slogans and social media strategies, the thinking goes, then most Americans will come to realize that the Democrats represent their best interests (i.e., people will stop “voting against their own interests”).

This mentality simply proves what two-thirds of Americans have come to feel: that the Democratic Party is out of touch. If leading Democrats were serious about looking in the mirror, they would come to see that a majority of people (including many registered Democrats) don't know what their party stands for because half the time they don’t seem to know what they stand for.

In other words, Democratic politicians have not been particularly consistent in their political beliefs over the years. They have often said one thing on the campaign trail while doing another thing in office. This was obviously one of the major grievances that voters had with Hillary Clinton, who had a history of flip-flopping on the issues and predicating her political positions on polling rather than principles (as with her position on marriage equality).

Like the Clintons, Chuck Schumer is a political chameleon who has changed his political identity throughout his four decades in politics. In the 1990s, for example, he was one of the leading Democrats to embrace “angry centrism,” along with President Bill Clinton. Now, 20 years later, he recognizes the current populist explosion, and is thus hoping to rebrand the Democrats as a bold — yet pragmatic — populist party.

When one looks closely, however, it is apparent that Schumer and the Democratic establishment are still committed to the ideology (or lack of ideology) of centrism. “Our better deal is not about expanding the government, or moving our party in one direction or another along the political spectrum,” insisted the senator in his Times column, as if to assure his Wall Street donors that the Democrats are still very much a pro-capitalist party and are simply trying to stave off the growing threat of socialism.

In 1990, at the dawn of the Democratic Party’s neoliberal shift to the right, former Republican strategist Kevin Phillips described the party as “history’s second-most enthusiastic capitalist party,” right after the GOP. “They do not interfere with capitalist momentum,” observed Phillips, “but wait for excesses and the inevitable popular reaction.”

Almost 30 years later, a popular reaction has arrived after decades of capitalist excess, and the Democrats are once again rebranding themselves to acclimate to the times; yet they are still very much history’s second-most enthusiastic capitalist party.

During his interview last weekend, Schumer remarked that Democrats had been “too cautious” and “too namby-pamby,” and while there is no doubt some truth to that, the party's underlying problem is that it has been too corporate, too centrist and — yes — too pro-capitalist.

Only when the party gets serious about adopting a set of principles and a political program that confronts the excesses of capitalism head-on will it deserve popular support from an electorate that now overwhelmingly backs the economic agenda of America’s most famous democratic socialist.