Who in the hell is Ty Cobb?! Everything you were afraid to ask about this suddenly important person 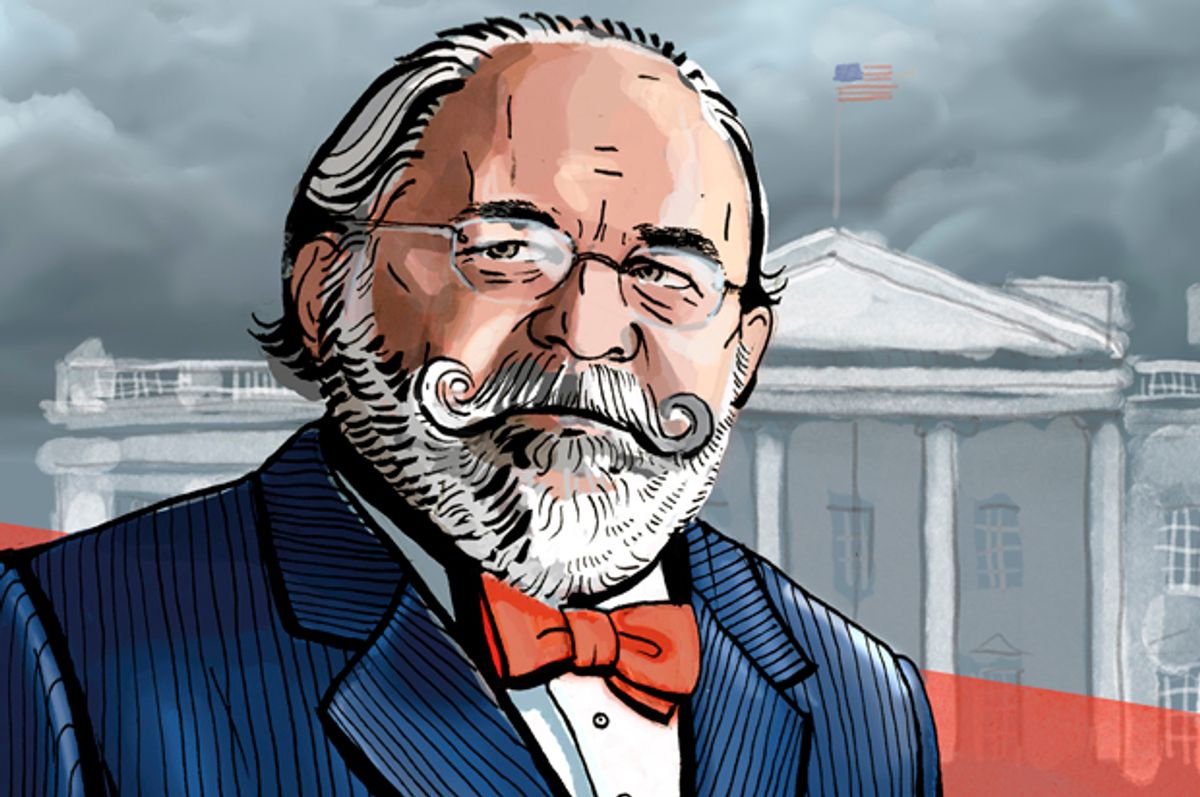 WHO WANTS TO KNOW: Cobb may actually be a distant relative of his namesake, the legendary baseball player Ty Cobb, who a recent biography by Charles Leerhsen proved was inaccurately portrayed for years as a racist. Whew. Okay, now that that’s out of the way, let’s move on to Jeff Sessions.

ALLEGED YOUTH: Cobb spent his childhood in rural Kansas. His parents knew he would grow up to be a lawyer when he spent hours in the fields, where he would voir dire wheat.

The official start date was delayed until July 31 because Cobb needed to recuse himself from a case of Stolichnaya.

Cobb said he took the job because “he had rocks in his head and steel balls.” Unfortunately, he used this same phrase in his profile on JDate.

You know what’s really sad? Steel balls are no longer made in this country.

Kasowitz recently had his duties reduced and will assume a lower profile. You know the gal who used to answer the phone outside the boardroom on “The Apprentice?” A little lower than that.

Cobb eschews the term “personal attorney” and has described his role as “a simple government employee.” When asked to elaborate, he said, “You know, just the humble stage manager of an SRO shit show.”

Unlike many others on Trump’s legal team, Cobb will work in the White House and report directly to the President. Which means he had to sign a non-disclosure Tweet.

He is also the only one of President Trump’s personal lawyers who has been granted the authority to fire himself.

SWAMP JUSTICE: Former partner at Hogan Lovells, a prominent DC law firm. Among Cobb’s many high-profile clients: Democratic fundraiser John Huang, Mary McCarthy, AIG, Office Depot, IBM, the Saudi Royal Family, former Senator Larry Craig’s travel agent and US Steel, which may or may not have compensated him in balls.

In 1998, Cobb successfully defended executives at Hudson Foods over a recall of beef tainted with E. coli. The executives were acquitted of all charges, and the beef was reassigned to Chipotle.

Cobb was recommended to Trump by Dowd, who worked with him at Hogan Lovells and is best know for the investigation and report that forced Pete Rose’s permanent ban from Major League Baseball. Unfortunately, the ban did not extend to cheap hair dye.

Hogan Lovells represented the state of Hawaii in the challenge to Trump’s travel ban, but Cobb never worked on that case. Because if he had, that would have been in clear conflict with the administration and embarrassing if it got out. Not unlike the last three days for Caitlin Jenner.

Before joining Hogan Lovells, Cobb’s mustache spent 12 weeks in Memphis in 1993 working as a stand-in for Wilfred Brimley’s mustache on the set of “The Firm.”

PRESIDENT TRUMP ON TY COBB: “Good guy. Good guy. Smart guy. Smart enough to understand what it means when I pick you. It’s like an anointing thing. Do you know anointing? They do it with oil. Listen to me. This is important. I don’t want a greasy guy representing me. But I do want an oily guy. Because he’s been anointed. Slick. I like ‘em slick. They don’t call it a grease slick. They call it an oil slick. You never realized that until I just said it, did you? So, oily. Roy Cohn. Let me tell you about Roy Cohn. You know when the oil shortage started? When he died. He was no boy scout, Roy Cohn. And let me tell you something else, because I was just there. The Boy Scouts? They’re no boy scouts, either. But they get it. They wear the shorts and the kerchiefs, but they get it. And one more thing. One more thing. You see where I got him to cut his fee? No? Well, I did, and this is the thing they never talk about.”

ANTHONY SCARAMUCCI ON TY COBB: “I don’t want to talk about that because I haven’t started yet. But can I just say a few more things about the President? I’ve seen the guy lift a subway car off a baby with his c**k. I’ve seen him split an atom in the back of a limo on the FDR with his c**k. I’ve seen him start a nude beach just by walking on it. Okay, that last line was from one of those ‘Most Interesting Man in the World’ ads, but as I understand it, we’re above plagiarism here.”

SALARY DUMP: Cobb leaves an estimated yearly income of at least $1 million at Hudson Lovells to take a job that pays a maximum of $179,000. But that includes the complimentary continental breakfast and unlimited buckets of range balls.

IS THAT WRIT? Cobb has said there is no reason to believe Trump is personally under investigation because he has not received a subpoena. Or a set of rubber bedsheets.