Despite all his promises, Trump has done nothing about the devastating opioid epidemic

Among all the president's empty promises, this one stands out: His voters are suffering, and they believed him 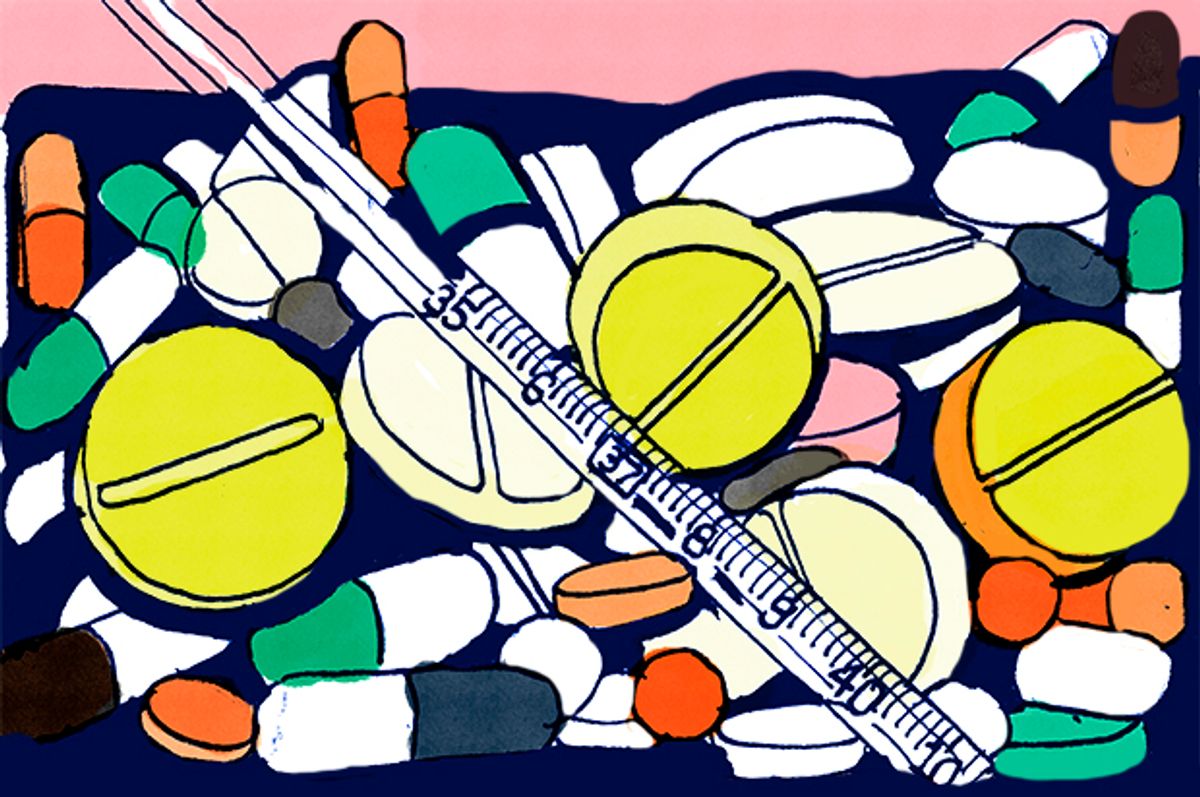 Facebook
Twitter
Reddit
Email
view in app
Little more than outrage or scandal emanates from the White House nowadays. As David Remnick of the New Yorker wrote recently, “Every day, Trump wakes up and erodes the dignity of the Presidency a little more.” And whether it is crass behavior at the Boy Scout Jamboree, an "Apprentice"-esque firing, a dehumanizing tweet to ban transgender people from serving in the military or another scandalous Russian detail, the nation's collective attention is perpetually rapt.

Lost in the morass of the Trump presidency is the country’s opioid epidemic. With the administration now fully embroiled in its mounting self-created crises, the public health calamity is unlikely to find space within the president’s tweets. Given the Republican plans to savage Obamacare -- now at least temporarily defeated -- the crisis only promises to fester.

Preliminary data compiled by the New York Times shows that drug overdose deaths exceeded 59,000 in 2016. The Times estimates that such deaths rose 19 percent from the 52,404 recorded in 2015. Large increases were seen in states along the East Coast, specifically Maryland, Florida, Pennsylvania and Maine. In Ohio, deaths mushroomed by more than 25 percent in 2016.

Data from 2017 promises to be even more troubling. According to Dr. Tom Frieden, former director of the Centers for Disease Control, this is the only area of American health that is significantly declining.

The sirens have been blaring for some time now. Referring to the opioid crisis in a campaign event last August in Columbus, Ohio, Donald Trump promised, “If I win, I'm going to stop it.” He later expounded, “We’re going to take all of these kids -- and people, not just kids -- that are totally addicted and they can't break it. We’re going to work with them, we are going to spend the money, we’re gonna get that habit broken.”

Voters in counties most buffeted by opioid overdoses and “deaths of despair” responded to Trump’s promises. Research by Shannon Monnat, a sociologist and demographer at Pennsylvania State University, on the 2016 election shows that nationally, and specifically in the industrial Midwest, New England and Appalachia, Trump outperformed Mitt Romney's 2012 vote in counties with higher rates of alcohol, drug and suicide mortality.

As he has frequently done for many of America's problems, Trump blamed the opioid scourge on Mexican immigrants and resolved to prevent the entry of heroin into affected communities by building a wall and deporting the "bad hombres" responsible for peddling drugs.

These claims were patently misleading. Many of the counties that supported Trump had fewer non-citizen Mexican immigrants than the national average. More importantly, the savvy, multinational drug cartels supplying heroin entered the ravaged communities only after prescription opioids, which had bred much of the addiction and overdose problem, became harder to procure in 2010. The cartels merely filled a vacuum. Indeed, as the Centers for Disease Control note, three out of four new heroin users report having first abused prescription opioids.

Despite the bluster and professed sympathies, Trump’s base is still awaiting succor for the rampaging crisis. Top public health and drug policy jobs remain vacant. The bipartisan commission on the opioid crisis being led by New Jersey Gov. Chris Christie has failed to meet its second deadline for an interim report on how best to grapple with the epidemic. Proposed federal budgets would cut funding to essential substance abuse programs and services.

Most ominous, however, is the Republican desire to repeal Obamacare and gut Medicaid, which is the largest funder of addiction services throughout the country. Its expansion under Obamacare provides necessary coverage to poor Americans in areas devastated by the opioid crisis, including Kentucky, West Virginia, Ohio and Arkansas -- all states with high levels of poverty that were won by Donald Trump. A study by Harvard University and New York University found that Medicaid expansion provides substance abuse or mental health services for almost 1.3 million people.

Crucially, in states like Kentucky, Massachusetts, Maryland, Ohio and West Virginia, Medicaid expansion has made possible the use of medication-assisted treatment (MAT) to combat the opioid problem. Medicaid covers between 35 and 50 percent of MAT in these states. Further, under the ACA’s Essential Health Benefit provisions, insurers are required to make substance abuse treatment available to enrollees.

According to Christie Green, a public health director for the Cumberland Valley District in southeastern Kentucky, addicts are likelier to seek treatment if they have insurance to cover it. “It is 100 percent out of their [financial] range if they aren't covered,” she said.

To compensate for the Medicaid cuts, Senate Republicans have offered $45 billion over 10 years to support the opioid crisis. This pittance is “a joke,” according to Richard Franks, a health economics professor at Harvard. To sufficiently fill the void, he estimates the need for $183 billion over 10 years, based on Medicaid data, to cover opioid addiction treatment and the illnesses often associated with it.

Six months after Trump’s inauguration, many of the issues he vowed to address remain not only unresolved, but largely untouched. Most poignant of all are the promises Trump made to parts of America riven by the opioid epidemic. Addressing a hopeful crowd in New Hampshire weeks before the November general election, Trump pledged to take care of the crisis. He then asked, “What’s taking so long?” We should ask him the same question now.