The chairman of a Republican Party group that’s hosting Roger Stone for two events in Arizona thinks Stone should stop trashing Sen. John McCain, R-Ariz., as treasonous — but he’ll say that only in an email he sent to Media Matters by accident.

The Pima County Republican Party in Arizona is sponsoring two events with Stone on July 26. Stone, a longtime adviser to President Donald Trump, is a professional smear merchant who will soon host his own program for fellow conspiracy theorist Alex Jones’ Infowars network.

Both before and after it was announced on the evening of July 19 that McCain has brain cancer, Stone informed followers that his speech will feature attacks against McCain.

During a July 18 appearance on a Glendale, AZ, radio program, Stone said that McCain will “die in disgrace as his antics are exposed for the American people. He’s not a hero, he’s a traitor. It’s very sad.” He also claimed that McCain is “mentally ill” and should be investigated for treason. Stone concluded by encouraging listeners to attend the Pima event because they “need to know that [McCain] is mentally unbalanced” and is treasonous.

On July 19 — prior to the announcement about McCain's cancer — Stone said during "The Alex Jones Show" that the Pima event would be “the John McCain truth tour. I am going to be exposing John McCain’s -- not only his treacherous and, yes, treasonous activity when it comes to his betrayal of President Donald Trump, but I’m going to be exposing his own campaign’s contacts with the Russians. In other words, John McCain is exactly guilty of the exact thing that Donald Trump has been accused falsely of by the Arizona senator. I want to focus on Senator McCain and his fitness to be the United States for Arizona (sic).”

On July 17 and 23, Stone sent an email to his mailing list stating, “Guests should prepare for a scorching analysis of John McCain’s involvement in the deep state attacks on President Trump.” That announcement was originally posted to Stone's website on July 14.

Media Matters sent a request for comment to Pima County Republican Party chairman David Eppihimer asking whether he thought Stone’s promotion of the event was appropriate. He replied, in part: “I DON'T believe this promotion is appropriate and should be ceased immediately.”

Eppihimer intended to send that email to his first vice chair but misdirected it to Media Matters instead. When asked about the email, Eppihimer said he did not want to give a formal statement. 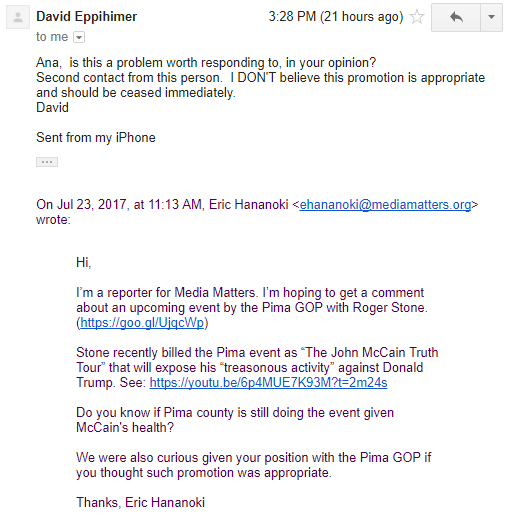 The Arizona Republican Party did not reply to requests for comment about whether it thought Stone’s promotion of the event was appropriate.