We need to talk about Theon 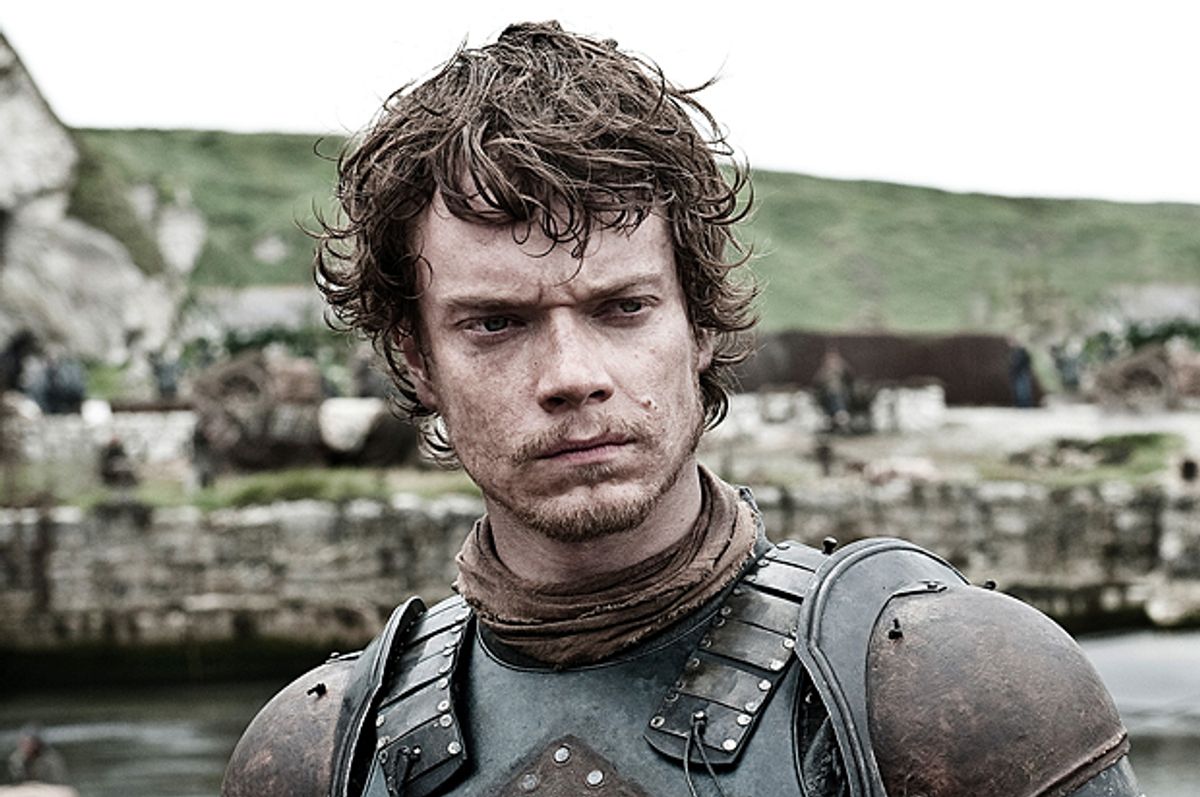 Alfie Allen as Theon Greyjoy in "Game of Thrones" (HBO)
--

The internet is abuzz with talk of Theon Greyjoy’s episode-ending leap into the unknown (i.e., the flaming vestiges of a savage naval battle). Opinions are flying left and right on how audiences are supposed to feel about the latest Theon twist.

Some fans are furious, calling Theon’s betrayal of his sister Yara an act of utter cowardice that erases any sympathy he had earned during his tenure with Ramsay Bolton. Others show a little more magnanimity, understanding Theon as a torture victim whose PTSD has just been triggered in a big way. While we can appreciate the writers’ realistic portrayal of Theon’s mental state, they’ve broken his storyline wide open yet again.

But maybe there's a reason Theon jumps ship other than to remind us that PTSD is real. There's a theory floating around (pun absolutely intended) and it involves the return of a character all but the superfans have forgotten. Remember the last person we saw on the South Narrow Sea, making his supposed series exit on a rowboat headed who knows where? That’s right, Gendry, Robert Baratheon’s blacksmithing bastard and old pal of Arya Stark, last seen making a seaward escape from child-killer Melisandre toward the end of season 3.

Surely Gendry hasn’t just been rowing around for three seasons, but it does seem significant that we last saw him in the same patch of ocean between Dragonstone and Dorne where we now see Theon, alone and adrift.

We may have forgotten about Gendry, what with all the other hubbub going on in the "Thrones" universe, but he simply enjoyed too much screen-time for his character not to make a return.

The rest of the theory goes like this: Gendry finds Theon, Theon convinces Gendry to bring him back to his only safe haven, Dragonstone, where Khaleesi, in all her regal benevolence, will take him in. Sam will alert the troops to the importance of dragonglass to defeating the White Walkers, and the giant stash of the stuff beneath Dragonstone. Now, if only there were an expert blacksmith among them to churn out weaponry. . .

It’s a good theory, and there are many fans who would delight in the return of an old favorite. We’ll just have to wait until the next episode’s “Previously On” sequence to find out if we will indeed meet him again, and if Theon’s storyline will regain significance, or, dare I say, redemption.

Theories and speculations aside, audiences have been jerked around when it comes to Theon Greyjoy. Lest we forget, before the gruesome Reek business, he was a slimy, womanizing turd who betrayed the Starks, took Winterfell, and had two young boys senselessly murdered. Only then was he mentally and physically tortured, and quite literally stripped of his manhood and certainly his dignity. Simply put, Martin and the showrunners have sent Theon, and audiences, on an emotional rollercoaster.

With this latest episode, they have thrown yet another wrench in the conundrum of How We’re Supposed to Feel About Theon. The stakes have been raised: Any further developments in his character arc will have to be bigger than the last, which means it can’t just end with his (possible) great gift of Gendry.

Will viewers see some great deliverance that they’ve arguably earned? Or will he go the way of so many other plotlines that have so infamously rejected traditional dramatic norms? Tune in Sunday.