This Kansas City neighborhood wrote the blueprint for transforming a community 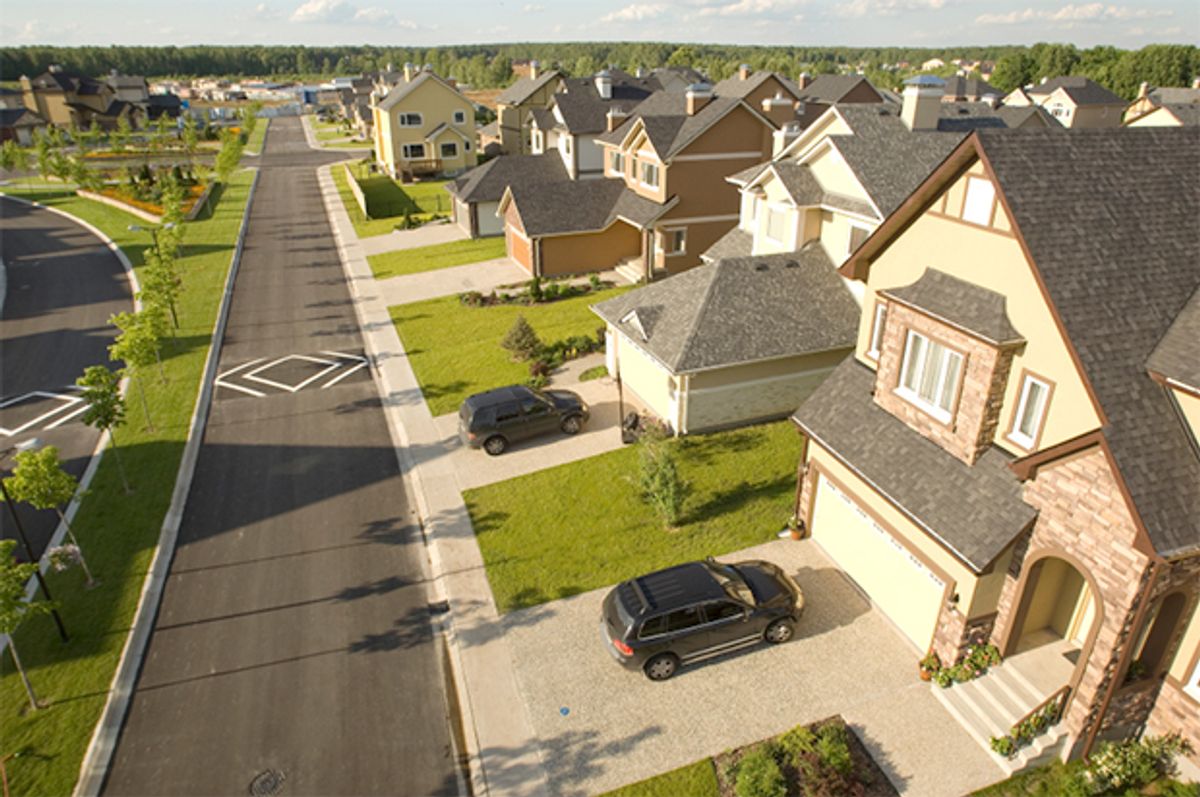 This article initially appeared on Grist. It's part of a series on communities overcoming obstacles to become cleaner and greener.

Yolanda and Alan Young never intended to make Ivanhoe their home. They purchased a two-story, shirtwaist-style house in the Kansas City, Missouri, neighborhood at public auction in 1986, planning to renovate and rent or resell it. They moved in temporarily, then never left.

“The grass was tall, and the house was in bad shape,” Alan remembers. But somehow it became home — the couple raised four children there. And they wound up restoring not just the once-vacant house, but the downtown community around it, as well.

Ivanhoe was far from an appealing prospect when the Youngs made their speculative purchase. Vacant homes dominated the neighborhood, alongside illegal dumps, drug houses, and gun violence. It took the couple’s leadership and determination to build a powerful neighborhood association that helped Ivanhoe recover from the crack cocaine epidemic.

Today, the drug-running and dumping are contained, new residents are moving in, and the enclave is considered an example, both regionally and nationally, of how a community can organize itself and choose the future its residents want. Blocks of houses, some old, some renovated, some looking brand new radiate out from the renovated former fire station and boxing gym that’s the headquarters for the Ivanhoe Neighborhood Council, which drives the revitalization efforts. Next door is a small park with a playground; across the street is a community garden.

Driving around in a silver Cadillac SUV with Margaret May, who has served as executive director of the council since 2001, I could see that the community was still in transition. As we drove, May gave motherly color commentary on what we saw, praising well-kept properties and saying “I’m not pleased with this” at ones that didn’t meet her standards.

“When I came to work here, every place you looked, there was trash,” May says. “That one visible sign appears better — and the fact that we’ve got the new housing underway, and we’ve decreased crime dramatically.

Ivanhoe got its name from German immigrants who settled there in the 1890s. By the 1930s, it was a thriving community of mainly working-class white families. When Kansas City schools were integrated following the Brown vs. Board of Education decision in 1954, the real-estate industry practice of block busting — scaring white residents about their property values when black families moved nearby — spurred white flight to the suburbs.

By the 2000 census, Ivanhoe had become 96 percent African American.

In 1951, Kansas City officials proposed building an artery that would connect residents of the city’s southeastern suburbs to downtown. It would bisect Ivanhoe down the middle. The process of acquiring land for the highway, as well as lawsuits threatening to halt it, kept the road from opening until 2001. Named after Bruce R. Watkins, a prominent local black politician, it eventually became a parkway to allay the environmental concerns of community members.

As the land set aside in Ivanhoe sat vacant for decades, it became an ad hoc landfill for the city, with trash and construction debris piled several feet high. A fee charged by auto shop owners for new tires is supposed to ensure that old ones were properly disposed of; instead, unscrupulous owners pocketed that money and dumped used tires in Ivanhoe. Alan Young recalls once having to clean up a haul of 10,000 old tires.

One illegal dump tends to attract others, and soon Ivanhoe started to look more like a landfill than a neighborhood. Besides the blight and the danger to children and animals, dumping poses a public health hazard. Water collecting in tires offers a breeding ground for mosquitoes carrying illnesses like West Nile virus. Appliances and electronic goods can leach harmful chemicals into the soil and groundwater.

Ivanhoe was in a state of disrepair in 1988 when the Youngs had their first child, a daughter. There were no curbs or sidewalks in the neighborhood, most of the streetlights were out, and potholes dotted the roadways. More threatening was the illegal activity — multiple drug houses on each block, with buying and selling out in the open, loud parties and music blaring at all times of the day, and regular gunfire.

The couple had to decide whether to stay in the neighborhood they had planned to just pass through. In that first year, they had grown close to their elderly neighbors who felt trapped in their homes

“We were torn between whether or not we should leave — and leaving really meant leaving them,” Yolanda recalls. “Like you were leaving your mother to handle all the problems that were happening.”

Alan credits the family’s Christian values for keeping them in Ivanhoe. They wanted to fight the feeling of hopelessness that was crippling their neighbors. So they met with the residents on their block to pray and discuss the chaos around them. They held prayer vigils outside of drug houses. They scheduled regular neighborhood cleanups.

“We thought, if we could clean up one block, would that perhaps make someone feel better and ignite a sense of hope?” Yolanda remembers thinking. “You’d be surprised by what that would do for someone’s feelings about where they live.”

They also tried to put a face to Ivanhoe, meeting with police and city officials to show that there were families and others living in the neighborhood, not just drug dealers and gang members. “We said, we need you to help us help ourselves,” Alan recalls. “That’s always been our M.O.”

In 1997, a Kansas City Star story labeled Alan an “inadvertent activist” when describing the decade of work he and Yolanda had spearheaded. By that point, the club he had started to organize his neighbors had spurred a network of 30 clubs throughout the 400-block neighborhood. That same year, the Youngs helped restart the local community group, the Ivanhoe Neighborhood Council, with Alan as president and Yolanda as secretary.

Others started to take notice. A prominent local mortgage broker, Jim Nutter, offered to help — eventually donating hundreds of thousands of dollars so the neighborhood group could renovate the building that would become its hub. The Kauffman Foundation, started by Ewing Kauffman, who owned a local pharma company and the Kansas City Royals baseball team, also approached about helping out. But Alan rebuffed the charity, saying Ivanhoe needed to put together a plan with concrete targets before accepting its money.

“Everytime I go and visit with the folks at the Kauffman Foundation still to this day, they always have to tell me that never before and never since has anybody turned their money down,” Margaret May says.

The foundation connected Young with a working group at the University of Kansas, which helped devise a blueprint for Ivanhoe’s future, encompassing the wishes of dozens of residents. The community wrote down nearly 80 goals broken down into four broad categories: beautification; youth, family life, and education; economic development, housing, and jobs; and crime and safety. The Kauffman Foundation aided their efforts with a grant of more than $450,000 over three years.

That money allowed the Ivanhoe Neighborhood Council to hire full-time staff. Margaret May came on board in 2001 after working for 30 years for the Social Security Administration, the last eight as an HR director. She’s since become the face of Ivanhoe — even though she lives a seven-minute drive southwest in the Brookside neighborhood.

May brags that after being the most crime-ridden neighborhood in Kansas City, Ivanhoe is no longer in the top 10. And since 2000, it has closed more than 700 drug houses by identifying hotspots in the neighborhood and enlisting residents to keep a watchful eye. She tells a story of one incident where police moved to close a house, and its owner fled out the back door, stashing drugs on an adjacent roof. A neighbor saw the whole thing and called the council members, who in turn called the cops, and the drugs were recovered.

The same hotspot strategy worked to isolate illegal dumping to a couple corners of Ivanhoe. This spring, when a more than 10-foot-tall stack of tires appeared at one of those sites, a camera caught the incident. May says police arrested the dumper at his tire shop after the council turned over the footage.

With those two problems under relative control, the neighborhood group is turning to a new goal: bringing residents back. Ivanhoe’s population is about 6,000 people, roughly half the population when the Youngs first arrived. The Ivanhoe Neighborhood Council became a community development corporation in 2009, and is working with a city agency to tear down vacant homes and replace them with new ones.

With the help of partners, the neighborhood council has built three duplexes and 12 cottages since 2015, according to Yolanda Young, who is now the council’s community outreach manager. Three more duplexes are planned for this year.

New residents like Lisa Hummel have been lured by the prospect of affordable housing. She and her partner, Neil Rudisill, bought a home in early 2012 that they renovated for the next two years. Since their first purchase, they’ve also acquired a few other properties in the northwestern part of Ivanhoe and begun an urban farm.

To purchase two vacant lots that were owned by Ivanhoe for their farm, they had to pitch their idea to the neighborhood’s housing committee. The Neighborhood Council has sway over much of what happens within its borders, even extending to some properties it doesn’t own. In the past, May says, it has recommended against people trying to buy homes to rehab on the cheap, because that won’t bring the types of neighbors they want.

“Ivanhoe is frequently referred to as one of the most organized and powerful neighborhood associations in the city,” Hummel says, noting that she now sits on the council’s board, while Rudisill works on its staff. “We came here with the knowledge that we were outsiders, and we spent over a year attending meetings and keeping our mouth shut and listening and appreciating.”

Their urban farm, a weekly farmers market started by Rudisill, and an Aldi supermarket that opened in early 2014 could mean Ivanhoe’s status as a food desert will soon fall away, along with its reputation as a drug haven and dumping ground. And Ivanhoe’s leaders are now using Bruce R. Watkins Drive, which played a large role in the neighborhood’s downfall, as a selling point. After all, Alan Young notes, it allows residents to get anywhere in Kansas City within 15 minutes.

Ivanhoe has come a long way since the Youngs bought their house in 1986. And although they still feel like there’s more work to be done, it’s hard to argue with their assessment that Ivanhoe residents once again have a sense of community.

“It’s the people in the neighborhood who are engaged and doing the things that good residents need to do that has brought about the progress that we have made,” May says. “Without that, you don’t successfully revitalize a community like this.”

Take Jean Watley, a retired warehouse worker who moved to Ivanhoe more than 20 years ago. Every morning around 5:30, she walks out of her home with a grabber and three garbage bags, collecting trash along a two- to three-mile loop covering Ivanhoe’s southwestern quadrant. Most of what she picks up are plastic water bottles, soda cans, and fast food wrappers.

Watley, who is in her 60s, has performed this daily ritual for nearly 15 years, and she tells me some people call her, affectionately, “the bag lady.” They stop her as she’s on her walk, to thank her or give her a thumbs up — gestures, Watley says, that make her feel like she’s doing her part.

When Watley first moved into the neighborhood with her then 19-year-old son, she slept on the floor because she was worried about bullets whizzing through the windows. Today, she says, she spends a lot of time enjoying her porch.

I ask her what motivates the people of Ivanhoe.