Donald Trump's transgender ban vs. Harry Truman's desegregation order: A backward echo of the past

Many of the same arguments Trump used last week also came up in 1948. Thankfully for history, Truman didn't listen 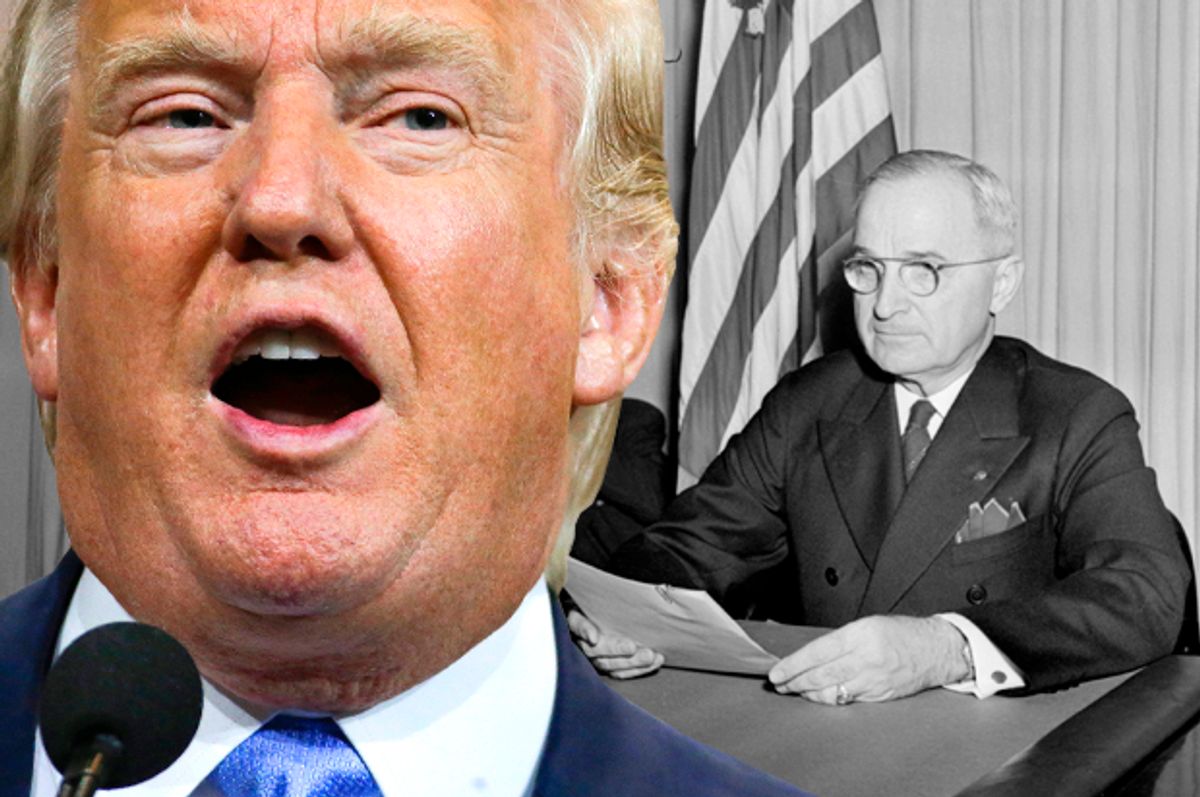 In 1948, a U.S. Army report to the Secretary of Defense warned that mixing races within military units would erode their effectiveness. “The soldier on the battlefield deserves to have the utmost confidence in his fellow soldiers,” the report warned. “They must eat together, sleep together, and all too frequently die together. There can be no friction in their everyday living that might bring on failure in battle.”

But that’s flat-out false. Several thousand transgender people are already on active duty in the U.S. military, and there is no evidence that they harm “readiness” or “cohesion.” Those terms are stalking-horses for prejudice and discrimination, every bit as much as they were in 1948.

At least 16 other countries allow transgender people to serve in their armed forces. Canada's military released a clever tweet shortly after Trump's announcement, noting that it welcomes "Cnds of all sexual orientations and gender identities" and adding a pointed hashtag: "DiversityIsOurStrength." In another jab at Trump, United Kingdom Maritime Forces commander Adm. Alex Burton tweeted that he was "so glad we are not going this way."

So as Trump and his allies on the Christian right rally around the new transgender ban, we should ask them a simple question: How could it be wrong to segregate African-Americans in the military but OK to bar transgender people from it?

The standard answer is that race is inherited — you’re born with it — while transgenderism isn’t. But that’s false, too.

Start with race, which is a social and cultural category rather than a biological one. That’s why it changes over time. A century ago, Jews were listed as a distinct race by U.S. immigration and census authorities; now they’re not. And the designation “Hispanic” didn’t exist until the 1970s.

By contrast, there’s some evidence that transgenderism — like sexual orientation — is at least partly inherited. So if prejudice on the basis of biology is wrong, the bias against transgender people would be wrong as well.

Here’s where conservatives will often cite religion, arguing that gender is immutable in the eyes of God. But for much of American history, racial distinctions — and, of course, racial hierarchies — were also seen as divinely sanctioned.

That was a common defense for state prohibitions on interracial marriage, which were struck down by the Supreme Court’s Loving v. Virginia decision in 1967. In the lower court ruling that Loving overturned, a Virginia judge underscored the theological rationale for banning marriages across the color line.

“Almighty God created the races white, black, yellow, malay, and red, and he placed them on separate continents,” the judge wrote. “The fact that He separated the races shows that He did not intend for the races to mix.”

And when all else fails, if you want to defend bigotry you can always fall back on the almighty dollar. President Trump tried a version of that on Wednesday, insisting that transgender people were bringing “tremendous medical costs” to the military. That was another sop to his Christian right supporters, who have threatened to kill a defense bill unless it includes a ban on the use of taxpayer money to pay for gender transition and hormone therapy.

But that’s another red herring, ungrounded in evidence. According to a 2016 study commissioned by the Pentagon, allowing transgender people to serve in the military would have “minimal impact” on health care costs.

The canard about medical cost carries another eerie echo of the debate over racial desegregation in 1948, when white Southern legislators charged that mixing the races in the military would lead to a spike in sexually transmitted diseases. Segregationist Georgia Sen. Richard B. Russell even cited statistics about the higher incidence of venereal diseases among African-Americans, who would allegedly infect other soldiers while swelling the military’s health bill.

Fortunately, President Harry Truman turned a deaf ear to to these demagogic claims. On July 26, 1948, he signed an executive order requiring “equality of treatment and opportunity” in the armed forces, “without regard to race, color, religion, or national origin.”

It’s a sad irony that President Trump chose the same day, 69 years later, to prohibit transgender people from the military. It’s still not clear what will happen to transgender people currently in the armed forces, who will continue to serve until the Secretary of Defense issues new guidelines.

But here’s what is clear: the effort to prohibit them is grounded in ignorance and prejudice, just like the pre-1948 segregation of black soldiers was. Don’t listen to the bigoted claptrap about “readiness” and “cohesion.” The American armed forces -- like the American nation -- are cohesive enough to accommodate everybody. And if you’re not ready to admit that, you need to get out of the way.