"Game of Thrones" recap: "Never believe a thing simply because you want to believe it" 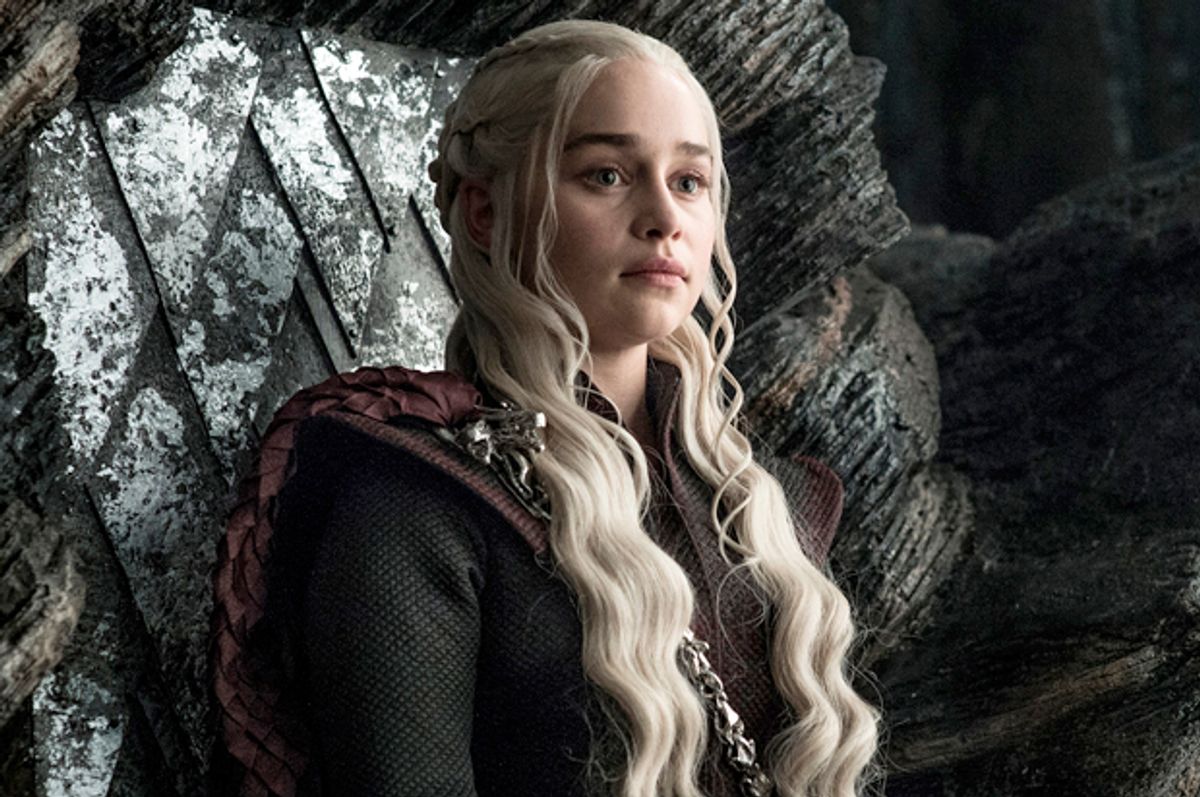 Spoiler alert: The following article discusses the “Game of Thrones” episode titled “The Queen's Justice.” If you haven’t watched it, stop reading now.

Sometimes the most meticulous plans are undone by a simple failure of imagination, Westeros’ great lady Olenna Tyrell (Diana Rigg) observes as she faces her own finale in Sunday’s “Game of Thrones.” In signature fashion, the Queen of Thrones faces her death with the same vivisecting wit she uses to take on a Tuesday. Sadistic honesty has always been the Tyrell matriarch’s weapon of choice, and watching her fence with her remarks have been an absolute joy.

But clever jibes are useless against battalions of men with sharp swords; hence, down went House Tyrell at the close of season 7’s third episode, “The Queen’s Justice.”

As for which queen the title refers to, that’s somewhat open to interpretation. Cersei Lannister (Lena Headey) finally gains retribution against Ellaria Sand (Indira Varma) and her daughter Tyene (Rosabell Laurenti Sellers), who Euron Greyjoy (Pilou Asbæk) marches through the streets alongside his leashed, collared niece Yara (Gemma Whelan) before laying them at Cersei’s feet.

Does the queen repay Ellaria for killing her daughter Myrcella by crushing the head of her enemy’s beloved daughter? No — she repays the Dornish ruler’s poisoned kiss with her own dose of the Long Farewell, the same venom Ellaria used on Myrcella, condemning Ellaria to watch her child slowly die and rot, with their chains set just far enough apart so that mother can’t comfort her dying daughter.

Opting for slow cruelty over explosive violence is a welcome turn in a series that favors severity over subtlety, and Mark Mylod’s direction amplified that scene’s unease by having the imposing Ser Gregor lurk nearby. A viewer with an eye for detail may have seen Cersei’s bane-filled smooch coming — petal pink is a terrible lip shade on Lena Headey — but it still worked.

Later in the episode, Jaime (Nikolaj Coster-Waldau) leads the Lannister forces to Highgarden to put an end of Olenna’s treason, removing both of the Dragon Queen’s allies from play. He, too, offers a lethal toxin to the last Tyrell — a gentler exit than anything Cersei has planned for her — and Olenna gulps down her death in a goblet of fine wine like a champion. Then the Queen of Thorns has her final say, as she always does, tossing Jaime’s mercy in his face by admitting she killed Joffrey. “Tell Cersei,” she says. “I want her to know it was me.”

Justice was served to only one end: Olenna’s.

“The Queen’s Justice” is a dialogue heavy hour that invites the viewer to contemplate the worth of words and the folly of putting too much stock in them. In “Game of Thrones,” the great houses live by their words, drilling them into their sons and daughters to force them to understand their place and purpose. Relying too heavily on words, the dense, brittle bricks and mortar of history, ceremony and advice, is a recipe for downfall.

Sansa Stark (Sophie Turner) knows this, owing some thanks for that education to Littlefinger (Aidan Gillen) and his manipulative sweet nothings. In “The Queen’s Justice,” Sansa proves herself an able leader, preparing Winterfell to serve as the North’s last stand if need be. Littlefinger attempts to flatter her with advice that sounds wise but doesn’t tell her anything she doesn’t already know. “Fight every battle, everywhere, always, in your mind. Everyone is your enemy. Everyone is your friend. Every possible series of events is happening, all at once.” Live that way, he adds, “and nothing will surprise you.”

Just as he finishes saying this, her long-lost and presumed dead brother Bran (Isaac Hempstead Wright) shows up at the gate. Surprise!

Before this, the meeting everyone’s been waiting for finally occurs when Jon Snow (Kit Harington) and Davos Seaworth (Liam Cunningham) venture to Dragonstone to meet Daenerys Targaryen (Emilia Clarke).

Dany insists on her usual verbose introduction, where Missandei (Nathalie Emmanuel) declares her as the Queen of the Andals, the Unburnt, Khaleesi of the Great Grass Sea, Breaker of Chains, Mother of Dragons. None of this cows Jon (simply and clumsily announced by Ser Davos as “King in the North”) to bend the knee, much to Dany’s irritation. Jon knows his short title is just as meaningless as her mile of flowery nicknames in the face of an advancing, frigid, evil force led by a being with an even shorter moniker, The Night King. And he speaks no words at all.

All of this talking may disappoint people who have been anticipating a battle-heavy season. Surely hacking and slashing is in the cards; there are still four episodes left. But “The Queen’s Justice” is rich with indications as to the nature of these final chapters, one of them being that Daenerys, Jon, Tyrion Lannister (Peter Dinklage) and basically anyone who isn’t Cersei or Jaime will not succeed until they release the expectations of inherited legacy.

For, as Ser Davos and Jon point out, there’s no sense in Dany taking what is hers if all that’s left is a pile of bones. Even if “fire and blood” are inevitable, Daenerys is learning that the Targaryen motto doesn’t foretell her right to rule. Nor does it have to portend her defeat. Besides, the dream to retake the Iron Throne originated with her brother Viserys, not her. And as Melisandre (Carice van Houten) says in an earlier episode, she may have a greater role to play.

“Perhaps we should be examining what we think we know,” Dany tells Jon. She was referring to her unwillingness to believe his reports of armies of dead marching on The Wall but, in truth, she could have been talking about her entire game plan.

A preview of conflicts to come arrives in the back half of “The Queen’s Justice,” as the Unsullied take Casterly Rock as part of a Tyrion scheme to cut off Cersei’s financial resources. This was a skirmish with little grandeur, and purposefully so; in another instance of flawed thinking, Tyrion’s assumes his brother and sister will behave according to traditions and rules set in place by their father.

But Casterly Rock hasn’t stored the Lannister’s gold in quite some time because, as a man visiting from the Iron Bank reminds Cersei (and the audience), the Lannisters no longer have much gold to store. Raiding Highgarden’s wealth will solve some of that problem. But Tyrion’s miscalculation leaves Grey Worm (Jacob Anderson) and his troops stranded at the empty Lannister family seat, a place with no tactical worth that is now surrounded by Euron’s ships.

The strangest thing about “The Queen’s Justice” are the slices that feel unnecessarily contentious. Producers have teased the meeting between Daenerys and Jon for some time, and I suppose David Benioff and D. B. Weiss can’t be blamed for wanting to draw out their time together.

That said, Dany’s refusal to trust Jon’s report after a time felt a bit forced, although Weiss and Benioff, who wrote this episode, admirably construct their exchanges to highlight Dany’s arrogant overconfidence. An intimidating speech in which she lists all the indignities she’s survived and achievements attained was especially rousing, particularly when she declares herself to be her own one true religion. Yet this woman who brought back dragons refuses to believe a man who sailed a great distance to meet her and warns her of a supernatural threat. Why? Maybe this unnecessary roadblock doesn’t matter too terribly, since she ends up allowing Jon to procure as much dragon glass as he can — after Tyrion counsels her that she can “give him something by giving him nothing.”

With each new episode it becomes clearer that salvation in “Game of Thrones” lies in meeting the impossible with the impossible. “The Queen’s Justice” asks us to believe in many impossibilities. If the dead can walk and dragons soar the skies, why not buy the malarkey that Sam, a green maester’s apprentice (John Bradley-West) can cure Ser Jorah (Iain Glen) of an incurable disease simply by reading some directions in an old book? We’ll allow it because Glen is an incredible actor, and nobody wanted to see Jorah die in a sickbed, looking like a gigantic crust of snot.

Similarly we’ll note that Melisandre basically confirms what we already know, that she and Varys (Conleth Hill) are destined to die in “this strange country,” although first she’s off to Volantis.

“A wise man said you should never believe a thing simply because you want to believe it,” Tyrion remarks during "The Queen's Justice," another example of clever counsel from a clever man. Earlier, Olenna warned Dany against being swayed by such prose when it spills from the mouths of male advisers, bragging that she has outlived many clever men by ignoring them. A woman, Cersei, brings that winning streak to an end because Olenna grew drunk on her own haughtiness. She couldn't dream of the possibility that such a vile enemy would explore her hubris to cut her down, just as Dany hasn't allowed herself to dream of anything beyond what she's been told is her birthright.

Perhaps the objective of bringing ice and fire together is to burn away all expectations these characters were born into and reveal what they're capable of when confronted with the challenge of living. Words and conversation are valuable, but our imagination hungers for a little more action.