One of actors who portray them hints that, yeah, the King of the North has some feels about the Mother of Dragons 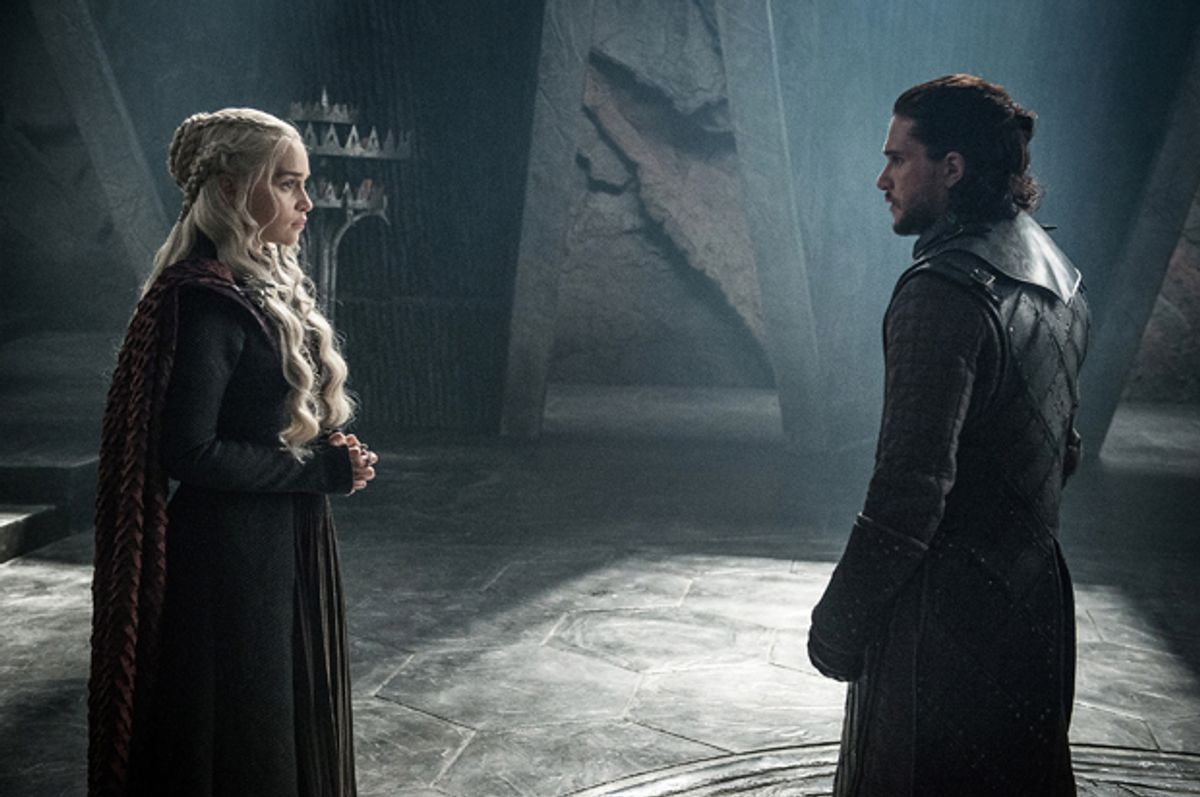 It was the meeting "Game of Thrones" fans had been anticipating for — what? — only about seven seasons: Last night the white-haired Mother of Dragons, Daenerys Targaryen finally met the raven-haired King in the North, Jon Snow. As somewhat anti-climactic as it was, it was still a great moment for anyone who's followed the show lo these last seven years.

If you personally saw some heat, sparks or even little heart emoticons filling the negative space between the two young, single, conventionally attractive power players in the world of George R.R. Martin, one of the actors who plays one of those two central roles, Kit Harrington, is here to tell you that you're not out of bounds.

As Harrington told Entertainment Weekly in an interview released just after last night's episode ended, "As far as Jon knows, he’s just meeting this queen he’s heard of and trying to negotiate with her — he’s not meeting Daenerys, who the audience has been watching for so many years." Indeed, we know that Dany is the normatively beautiful Daenerys of the House Targaryen, the First of Her Name, The Unburnt, Queen of the Andals, the Rhoynar and the First Men, Queen of Meereen, Khaleesi of the Great Grass Sea, Protector of the Realm, Lady Regnant of the Seven Kingdoms, Breaker of Chains and Mother of Dragons. For Jon Snow, who has spent the last few years hanging above and around the Wall, however, she's an unknown factor.

Harrington adds, "That helps with the surprise of it. He walks into the room and doesn’t expect to see such a beautiful young woman of similar age to him. Any young man’s reaction is going to be, ‘Okay…’ but he puts that aside, because he has to.”

So, yeah, Jon has the feels, but he's tabling it for the good of The Realm.

As Clarke tells it, however, the feeling is not exactly mutual. "She doesn’t like him and she doesn’t believe him,” she says.

Granted, it's not a great start, but it could wind up being one of those rom-com meet-cutes where each character starts off being wary before they each slowly, inevitably fall for the other (see Katherine Heigl's oeuvre for reference). As showrunner David Benioff said, “There isn’t instant chemistry. He’s annoying and she’s annoying and they have to figure out how to make peace.” It's like "When Harry Met Sally," but with war and dragons!

Now, some on the internet are already saying we as fans shouldn't "ship" these two characters. After all, she's his aunt. But, hey, in a series where the most stable, long-lasting relationship is between a sister and brother, Jonerys seems a distinct possibility. Besides, those kind of relationships are sort of a Targaryen thing.