On “Game of Thrones” and “Twin Peaks,” the battle mirrors the one in America 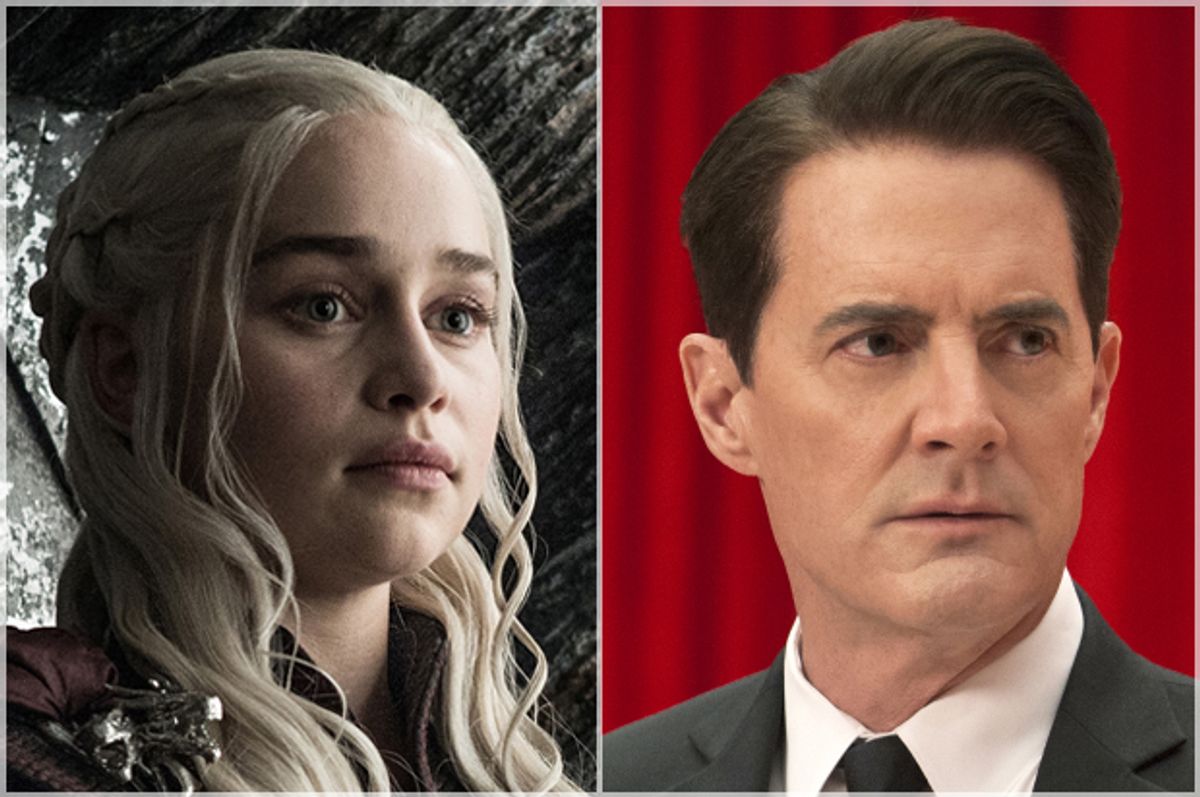 Each Sunday night, the gulf between good and evil closes a little bit. I’m referring to the two biggest prestige television shows on the air right now: “Game of Thrones” and “Twin Peaks.” (Biggest, in terms of conversation-generation and critical acclaim)

On “Game of Thrones,” Jon Snow, the once-resurrected and widely respected King of the North, is preparing to battle the White Walkers, an army of icy, undead killers. Elsewhere, Daenerys Targaryen, the righteous mother of dragons, is plotting to claim the Iron Throne from Cersei Lannister, a woman who slithered into power and has shown that she will go to any length, no matter how sinister, to retain it.

And on the current season of “Twin Peaks,” good and evil are forces of electrical energy, born, it seems, from a nuclear reaction and otherworldly intervention. FBI Agent Dale Cooper has been split in two — Good Cooper (currently Dougie Jones) and Bad Cooper — and the two sides seem bound for a battle of their own.

Such pure representations of heroes and villains are not new on television, prestige or otherwise — let alone in other forms of storytelling. The countervailing forces on “Twin Peaks,” for instance, are the same forces presented in the show’s original run more than 25 years ago; the vessels for the energy are just different. Good and bad was similarly clear cut on “Star Trek,” “The X-Files” and old television Westerns.

But for the most part, the depictions of good and evil on “Game of Thrones” and “Twin Peaks” — as well as on “Fargo” and “Legion” — mark a shift from the depictions on the biggest prestige shows from earlier this century. On “The Sopranos,” “Mad Men,” “Breaking Bad” and “The Wire,” there was no gulf between good and evil. The clash between the two forces was usually an internal one. The question was: which side would win out within Tony Soprano, Don Draper, Walter White and Baltimore?

If the show “Vinyl” proved anything, it was that there is currently anti-hero fatigue. The show, which debuted in the spring of 2016, had all the hallmarks of a successful prestige drama: an acclaimed showrunner (Terence Winter, of “Boardwalk Empire”); a high-profile leading man (Bobby Cannavale); dark lighting and a sexy period setting (New York in the ‘70s). The show even had Mick Jagger and Martin Scorsese attached to it. And yet, “Vinyl” drew meager ratings and wound up being a $100 million bust. Viewers, it seemed, were tired of plots built around "good men who do bad things."

Of course, that does not mean that modern television is devoid of complicated characters. Not every ambitious drama has a battle of some sort as its underpinning. But it’s interesting that even where anti-heroes resembling Don Draper and Walter White exist, their progression looks different. Over the course of “The Young Pope,” Lenny Belardo grows from being impetuous and unforgiving to being measured and gracious. “The Leftovers,” which recently concluded its third and final season, was widely derided in its first season only to become critically adored in its second and third season. The shift in the show’s popularity also mirrors a pivot within the show’s protagonist, Kevin Garvey. In the first season, Kevin was a thorny, difficult man; by the second season, he softened and was defined by his searching.

Does the shift in portrayals of good and bad on television have anything to do with the way the world has changed beyond the box? Probably not. “Game of Thrones” was created back when the prospect of Donald Trump running for president elicited only laughs. David Lynch does not give the impression of doing anything reactively; if we are to believe every story about him, his art flows from an internal, unconscious place.

But watching “Twin Peaks” and “Game of Thrones” every Sunday night in this climate of intense polarization does feel appropriate. We used to be forced to empathize with villains and question who we rooted for. Now everything seems obvious. Good and evil seem like they very well could be currents possessing individuals to act the way they do. And on television and beyond, the central drama is no longer what is good and bad but which will win out.