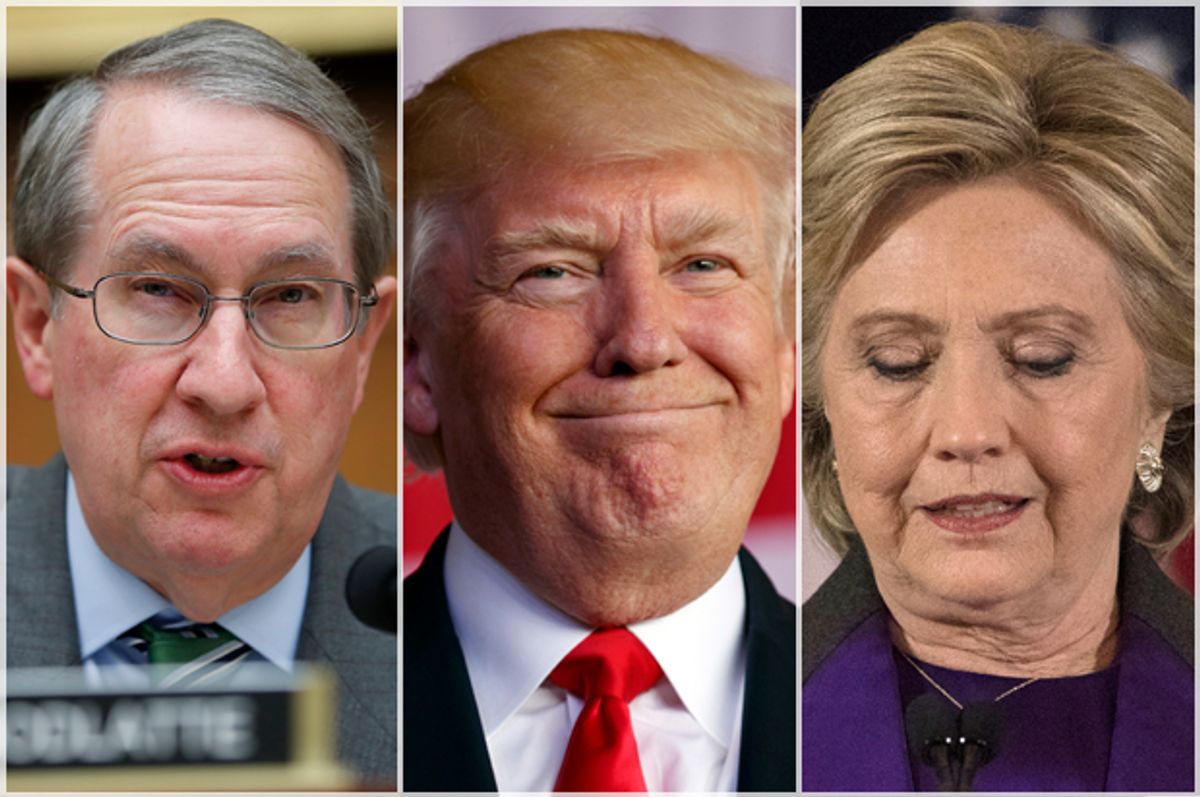 House Republicans are proving that they're going to be serious about investigating . . . Hillary Clinton.

The House Judiciary Committee has turned an investigation into any possible collusion between President Donald Trump and Russia during the 2016 presidential campaign into a witch hunt, probing "decisions made by President Barack Obama’s Justice Department in its probe of Clinton’s use of a private email server, as well as alleged Clinton ties to foreign governments and the leaking of classified information," according to Bloomberg News

The new focus comes after Democrats on the House panel sought further information on the role of Attorney General Jeff Sessions in the firing of former FBI Director James Comey. But Rep. Bob Goodlatte, R-Va., and Republicans instead pivoted and "turned it into a request demanding new probes into Clinton," according to Bloomberg.

"Until Mr. Mueller’s investigation is complete, it is redundant for the House of Representatives to engage in fact-gathering on many of the same issues he is investigating," Goodlatte said during a hearing last week. He added that because of the various investigations, "taxpayer dollars to investigate the Trump campaign’s connections — or lack thereof — to the Russian government," is unnecessary.

Jerrold Nadler, a New York Democrat on the House panel has said that Goodlatte has "done zero - absolutely zero -- as chairman to look into these things."

Investigating Hillary Clinton has been one of the only things that Republicans can get behind. On Inauguration Day, Rep. Jason Chaffetz, then a Utah Republican, promised, "the investigation continues."

But this latest twist comes courtesy of Reddit, where a conspiracy theorist gave them some ideas. Here's what Lawfare had to say about their latest windmill-chasing endeavor.

The committee voted to adopt an amended resolution introduced by Representative Matt Gaetz (R-Fla.) calling for a special counsel investigation into, variously, former Attorney General Loretta Lynch’s instructions to former FBI Director James Comey to refer to the Hillary Clinton email probe as a “matter” rather than as an “investigation;” Comey’s leaks to Columbia University law professor Daniel Richman; Comey’s leaks to New York Times reporter Michael Schmidt as far back as 1993 (when Schmidt, who graduated from college in 2005, would have been around ten years old); “collusion” between Comey and special counsel Robert Mueller; any knowledge on Comey’s part of the Christopher Steele dossier and of efforts by the intelligence community to surveill Trump or unmask his associates in a quest to damage Trump’s campaign or his presidency; immunity deals provided by the FBI to various Clinton aides over the course of the email investigation; whether Clinton secretly approved a deal to transfer U.S. uranium deposits to Russian control in return for donations to the Clinton Foundation; and yes, the specific circumstances of Clinton advisor Huma Abedin’s employment at the State Department.

If this sounds like the work of conspiracy theorists, that’s because that’s exactly what it is. Wired reported on Friday that a Gaetz staffer appears to have crowdsourced the amended resolution with the help of r/The_Donald, a pro-Trump subreddit notorious for both its embrace of conspiracy theories and its gleeful offensiveness. The Reddit user, “Devinm666,” regularly posted on the forum praising Gaetz, referencing his work in Congress, and at one point publishing a picture of his congressional ID badge with his name and face blacked out. According to Wired, Gaetz confirmed that “Devinm666” is Devin Murphy, a legislative aide in his office.

Recently, conservatives have latched on to the idea that Clinton is still worthy of investigating — especially as the Trump administration spirals out of control. Last month, Sean Hannity had wondered why Sessions hasn't been investigating the Obama administration.

One day they'll find the true reason why Hillary Clinton shouldn't be president in 2016.