If Donald Trump is innocent of collusion with Russia, how come he keeps acting so guilty? 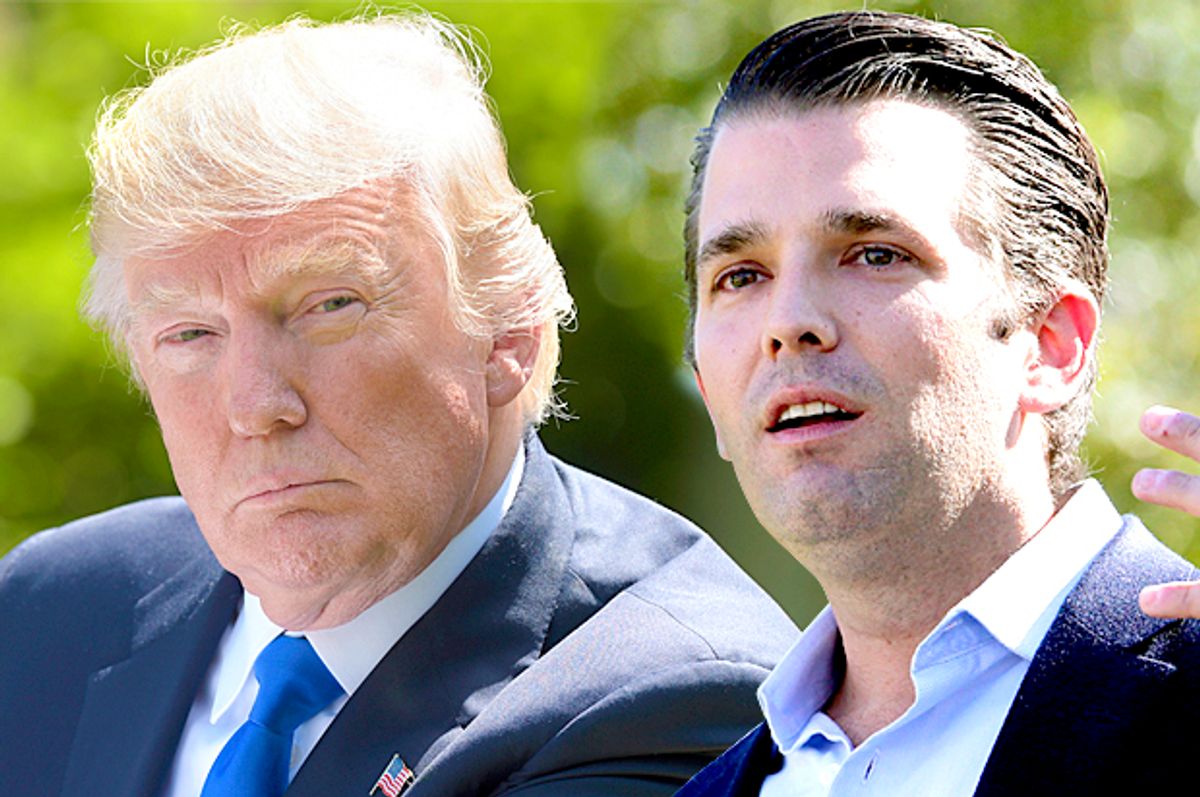 Several weeks ago, Donald Trump Jr. publicly released emails that revealed his enthusiastic interest in receiving information from Russian sources that would be harmful to Hillary Clinton's 2016 presidential campaign. This information was part of an ongoing effort by Russia to undermine the American electoral system, with the apparent goal of installing Donald Trump as president.

As is standard operating procedure for the Trump administration, its officials repeatedly lied, dissembled and changed the story about Trump Jr.'s meeting with Russian representatives -- at least one of whom previously worked as a spy for Russia's intelligence agencies. The Washington Post is now reporting that the president himself was actively involved in explaining away his son's meeting with Russian operatives. If this is true, Trump engaged in a coverup regarding his campaign's collusion with Russia.

These newest revelations are part of a larger pattern.

Some of Trump's closest political advisers and allies are under investigation by the FBI and the Department of Justice for inappropriate and quite likely illegal connections with Russia. One of Trump's most senior confidants, the now-disgraced former national security adviser Michael Flynn, appears to have been compromised by Russian agents.

Trump fired FBI Director James Comey in May, by the president's own admission to stop the latter's investigation into the Russia scandal. Trump apparently attempted to pressure senior members of the American intelligence community to shut down Comey's investigation as well. They refused.

Trump has publicly chastised Attorney General Jeff Sessions for recusing himself from the Russia investigation, rather than intervening on the president's behalf.

It has been reported that Trump and his attorneys have actively explored whether the president can legally pardon himself, along with other members of his administration, if -- or when, as seems increasingly likely -- it is discovered that they colluded with Russia during the 2016 presidential campaign.

Trump and his representatives have of course denied any wrongdoing. Which leaves us with a question.

Why would innocent people act so guilty?

There are two immediate possibilities.

Trump and his closest advisers are bungling fools. This is the preferred narrative of a Republican Party and its mouthpieces, who desperately want to claim that Trump's only "crime" is that he and his cadre are inexperienced novices in the realm of hardball politics, or are "too disorganized" to have colluded with Russia. Alternatively, in the worst-case scenario, Trump is simply unhinged or "out of his gourd," somewhat akin to the Mafia don who walks around his neighborhood at all hours of the day wearing a bathrobe and blabbering to himself.

Or as The Guardian pithily observed last weekend:

Like some kind of Shakespearean villain-clown, Trump plays not to the gallery but to the pit. He is a Falstaff without the humour or the self-awareness, a cowardly, bullying Richard III without a clue. Late-night US satirists find in this an unending source of high comedy. If they did not laugh, they would cry. The world is witnessing the dramatic unfolding of a tragedy whose main victims are a seemingly helpless American audience, America’s system of balanced governance and its global reputation as a leading democratic light.

The second answer, however, is more probable. Trump and his inner circle of family members and political operatives likely colluded with Russia to undermine American democracy. Trump, his allies and the Republican Party benefited personally and politically from this collusion, which is why they are so desperate to stop any investigation into such matters.

What would it take for Republicans to turn on Trump?

Everything and nothing. A video of Trump on his knees before a bare-chested Vladimir Putin, pledging fealty and being given a bag of gold for his loyalty, would not sway them. "Fake news!"

To wit: 77 percent of Trump's voters would still support him even in the face of clear evidence that he colluded with Russia to steal the 2016 presidential election. Gallup's most recent poll shows that 82 percent of Republicans continue to support Mr. Trump.

Republican elites still view Trump as a useful idiot -- a vessel through which they can advance a right-wing agenda that will destroy the social safety net, transfer more money from the working class and poor to the rich, reverse the civil rights gains of people of color as well as gays and lesbians, destroy the Constitution's wall separating church and state, end women's reproductive rights, gut public education, demolish environmental protections and allow the commons to be raped by gangster capitalists.

But as conservative columnist Michael Gerson warned several months ago in The Washington Post, this bargain has come at a cost:

The conservative mind, in some very visible cases, has become diseased. The movement has been seized by a kind of discrediting madness, in which conspiracy delusions figure prominently. Institutions and individuals that once served an important ideological role, providing a balance to media bias, are discrediting themselves in crucial ways. With the blessings of a president, they have abandoned the normal constraints of reason and compassion. They have allowed political polarization to reach their hearts, and harden them. They have allowed polarization to dominate their minds, and empty them.

Ultimately, only Republicans can end the madness of King Trump. It is their responsibility. To this point, alas, they lack the courage, patriotism, wisdom and moral clarity necessary to do so.