“That sounds like some national park revisionism”: Watch CNN’s Jim Acosta confront Stephen Miller’s whitewashing of the Statue of Liberty 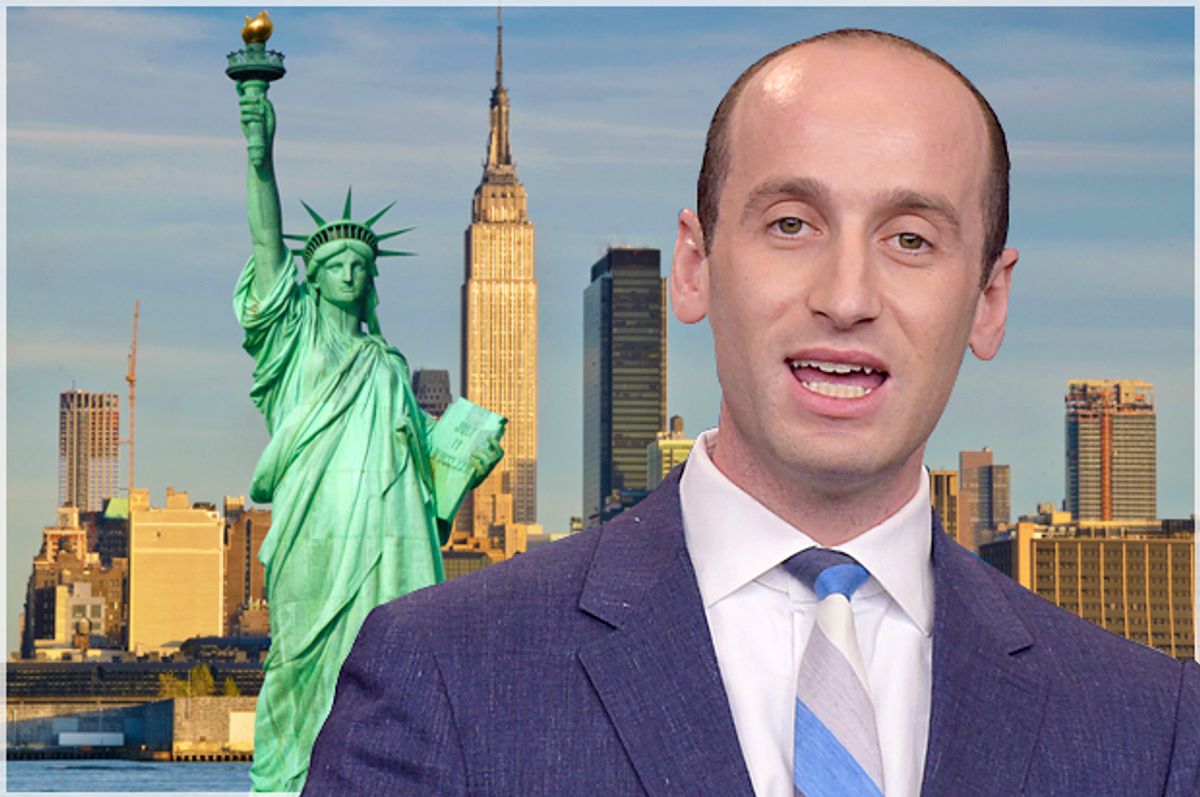 Stephen Miller has been on a particular political crusade for well over a decade.

From the screeds against “minority culture” he wrote while a student at Santa Monica High School, to the halls of the White House, Donald Trump’s policy adviser has long pushed for extreme anti-immigration policies to become part of the Republican Party’s platform. That’s why he was selected by the White House to sell the Republicans' latest extreme plan that aims to slash legal immigration by more than half -- even though the bill is not remotely close to garnering the necessary 60 votes in the Senate to pass. The proposal, and Miller’s most incredible attempt to pitch it on Wednesday, was quickly revealed to be little more than an attempt to distract a base hungry for a scapegoat at a time when the administration has failed to meet its most basic campaign pledges.

Talk of the white nationalists surrounding Trump has tapered off since his administration has become absolutely engulfed by scandal in his first months in office, but Stephen Miller is what white nationalism looks like in 2017. Not KKK rallies and hoods, but well-spoken, educated bigots in suits.

"When it comes to immigration,” Acosta said to Miller, “The Statue of Liberty says 'give me your tired, your poor, your huddled masses, yearning to be free.' It doesn't say anything about speaking English or learning to be a computer programmer. Aren't you trying to change what it means to be an immigrant coming into this country, if you are telling them you have to speak English. Can't people learn how to speak English when they get here?"

Miller first responded by pointing out that English is already a requirement of naturalization. (Not immigration, as the president’s plan proposes.) "The notion that speaking English wouldn't be a part of an immigration system would actually be very ahistorical," he claimed.

Acosta replied that his father was a Cuban immigrant who fled Cuba before the missile crisis and that he knows very well about green card policy.

When Miller then said the poem was “added later” to the statue, Acosta retorted, “that sounds like some sort of National Park revisionism.” (It’s true that “The New Colossus” was added to the Statue of Liberty in 1903 and that the statue itself was dedicated in 1886.)

"The Statue of Liberty has always been a beacon of hope to the world for people to send people to this country, and they're not always going to speak English, Stephen, they're not always going to be highly skilled," Acosta went on to argue. “You are sort of bringing a 'Press One For English' philosophy here to immigration, and that is not what the United States is about."

The back-and-forth continued for nearly seven minutes. Armed with studies from right-wing think tanks like the Center for Immigration Studies and the American Civil Rights Commission, Miller finally turned the questioning around to the reporter: “But let’s also use common sense here, folks. At the end of the day, why do special interests want to bring in more low skilled workers?”

As Roll Call’s Niels Lesniewski noted, however, despite his argument in favor of Trump’s plan to prioritize high-skilled workers who speak English and slash legal immigration on Wednesday, Miller argued against even high-skilled immigrants as recently as 2014.