The myth about Trump’s generals

If they’re the adults in the room, we’re doomed 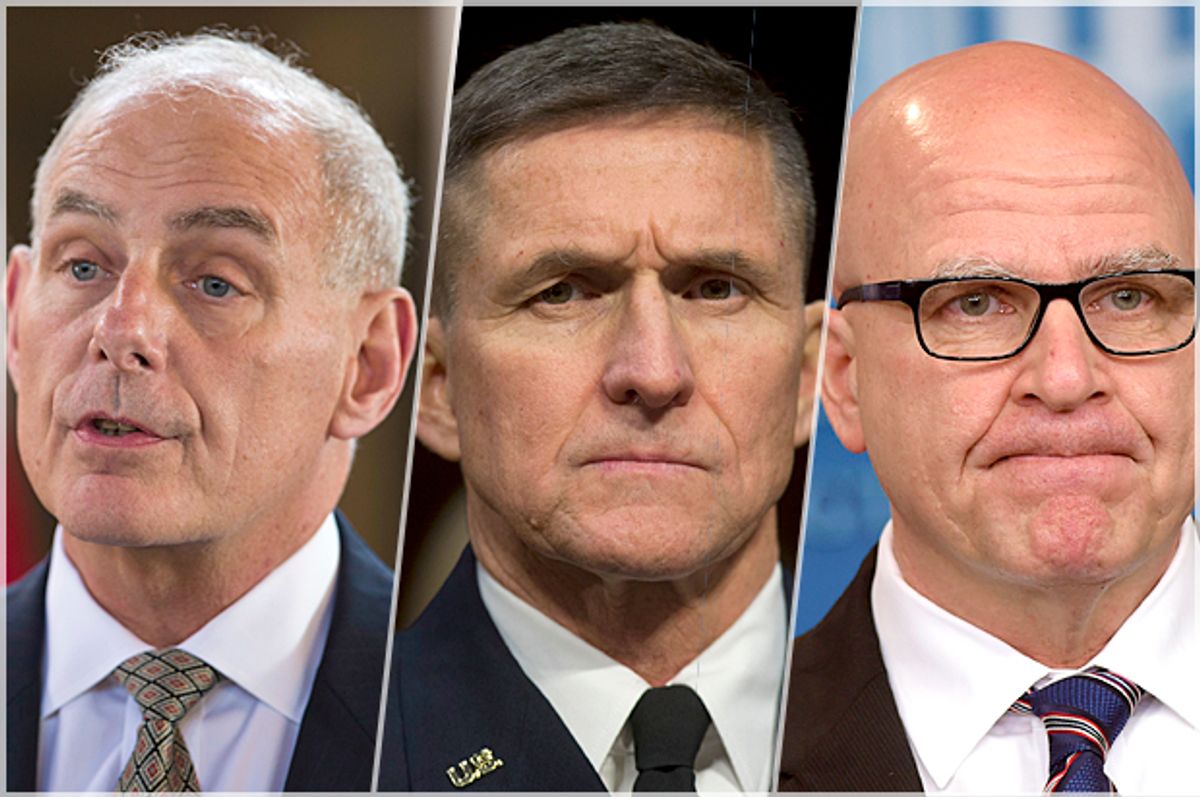 I know it’s asking a lot, but can you remember all the way back to January, not long after Trump was inaugurated, when Republican and Democrat establishment types were still reaching for reasons not to get too alarmed by the man sitting in the Oval Office in the White House? I mean, we’d already been through quite a bit. There was the whole lie-fest about the size of the inaugural crowds, photographs of Obama’s and Trump’s compared side by side yielding incontrovertible evidence that Trump’s inauguration was woefully bereft of attendees. There were even photos of Trump and Melania walking down Pennsylvania Avenue with empty bleachers in the background, and still Trump and his minions went to the mattresses in an artillery barrage of lies about the biggest inaugural crowds ever. Then came the clusterfuck surrounding his executive order banning travel from seven Muslim nations and cutting off refugees altogether. He got to work on the phone, calling world leaders and quickly insulted the Presidents of Mexico and Australia. And there were tweets of course, the earliest of them not terribly unhinged but already beginning to stink of the rot that was to come. Editorial pages tried to calm the waters, and congressional leaders from both parties echoed them, with remonstrations not to get too worked up because “Trump’s generals” were there to moderate his baser instincts and were sure to smooth the way if things got out of hand.

The first hint that the generals weren’t working out was the departure of one of them, General Michael Flynn, Trump’s national security adviser, under what we now refer to colloquially as “the Russia cloud.” Flynn, no doubt adhering to the Trumpian propensity for lying first and thinking later, lied about his contacts with Russian Ambassador Sergey Kislyak and was abruptly cut loose when it was learned that his lies including a whopper about not talking with Kislyak about lifting sanctions imposed by Obama after the Russian invasion of Ukraine and seizure of Crimea, not to mention those imposed after it was learned that the Russians had tried to steal the election for Trump.

Flynn was quickly replaced by another general, H.R. McMaster, a bald-headed bulldog with a reputation as something of a military rebel because he had published “Dereliction of Duty,” a book that roundly criticized the generals of the Vietnam era for not speaking truth to power about that misbegotten Asian misadventure.

Oh, how the praises were sung for McMaster!

He was the military genius who had taken the outlaw Iraqi town of Tal Afar and brought it under control way back when we were winning the war in Iraq! Marvelous, magical, masterful McMaster! Surely he would bring discipline to a White House that was already devolving into chaotic anarchy!

Then along came March 4, when Trump woke up in the morning and issued some tweets accusing his predecessor President Obama of “tapping my phones.” That little spurt of thumb-thwacking started a public relations landslide that quickly turned into a legal avalanche which began with the notorious White House snipe hunt conducted by House Intelligence Committee Chairman Devin “Dim Bulb” Nunes, when, one morning, he delivered to the White House a stack of “intercepts” which he had ferreted out of the White House itself the night before. They were supposed to incriminate Obama and his national Security Adviser Susan Rice but ended up adding to the pile of evidence that there was something dirty in Trumpland when it came to the Russians.

It was McMaster’s national security council office which up-chucked the supposedly incriminating intercepts that implicated nobody but Trump himself. Then came the firing of James Comey which begat the appointment of Robert Mueller and the devolution of the White House communications office into a miasma of incompetent back stabbing and high volume lying, which devolved further into low-volume off-camera lying and even more back stabbing amidst a tsunami of leaks from within the White House itself. By the end of last week, when you looked up the word “chaos” in the dictionary, you found a line drawing of the White House next to it.

And what were Trump’s other generals doing all this time? Well, he had General James “Mad Dog” Mattis over at the Department of Defense and General John F. Kelly over at Homeland Security, until of course he had to push Kelly into the White House to take up the position of Chief of Staff because Sean was mad at Reince who was angry with Sarah who was upset with Hope who was trying not to show how insane Ivanka was making her but that was before The Mooch arrived and everybody hated him, especially Sean who threw a tantrum and quit. So now we’ve got one general across the river at the Pentagon and two generals inside the White House itself.

What was Kelly doing before he headed over to 1600 to kick ass and take names? Man, he was coming along fine, moderating Trump’s worst instincts! Kelly hit the ground running by ordering his ICE agents to round up every undocumented immigrant not actually nailed down to the earth with ten penny nails between his toes no matter if he’s holding down a job and contributing to the tax base and hasn’t got a blemish on his record. Oh, and working on those plans for the wall that’s going to keep out all of the drugs and the terrorists and the rapists and all those dangerous immigrant mommies coming over the border with a baby on their backs looking to take a hatchet to the U.S. economy by gobbling up one of those jobs everybody is fighting each other to get swabbing out toilets and polishing floors and changing stained sheets at condos along the Florida shore. Not to mention telling his agents at airport immigration control to take an extra careful look at those terrorist grandmas coming through customs.

And the Mad Dog? Well, after Trump announced that he was going to pretty much let the Pentagon run its wars any way it wanted to, the Mad Dog’s big new strategy for how to win the war in Afghanistan that was due by mid-July is being held up by General Steve Bannon and General Erik Prince at the White House, who have apparently decided that the way to win a war we’ve been losing for 16 straight years is to outsource it to General Prince’s own private army of mercenaries, because there’s nothing like tossing a passel of defense dollars into the private sector, is there? And that Pentagon policy on transgender troops that had been so carefully crafted by Mad Dog and the Joint Chiefs of Staff? Thrown in the crapper with a new Trump dictate by thumbs in a surprise series of tweets last week. How about a strategy for dealing with North Korea, which now seems able to threaten the west coast of the United States with ICBM’s? Waiting on those presidential thumbs to tell Mad Dog what to do, apparently.

And don’t you go worrying your head about our strategy to deal with an increasingly belligerent Russia. Trump had military genius McMaster right at his side at the G-20 summit when he met formally with Mr. Putin and then huddled secretly with him at dinner . . . except whoops! McMaster was nowhere to be seen! He was back at the White House still trying to rid the National Security Council of holdover staffers from the General Flynn era, and last week he actually managed to jettison one, but not the one he really wanted to, his NSC intelligence chief, 31 year old Ezra Cohen-Watnick, who of course was one of the White House snipe-hunters who one night helped Dim Bulb Nunes find the intelligence intercepts in the White House which he delivered to the White House the following morning. No, while Trump himself is running Russia strategy and Cohen-Watnick scampers around trying to find any fingerprints left by Susan Rice, and strategy for winning our 16 year war in Afghanistan lingers in the office of General Bannon, General McMaster is left to do what, exactly? Twiddle his thumbs while he waits for his boss’ thumbs to tweet his new marching orders?

The single biggest myth about Trump’s generals is that they’re the “adults in the room,” the level-headed competent few among the incoherent many in the nascent Trump administration. How competent and level-headed? To answer that question, I present the wars in Afghanistan and Iraq! We’ve been losing one for 16 years and the other for 14 years, and those wars belong to these guys. Just like World War II was Eisenhower’s war and Patton’s war, Iraq and Afghanistan are Mattis’ war, and Kelly’s war, and McMaster’s war. And as for McMaster’s indictment of Vietnam era generals for saluting and saying yes sir and failing to question decisions made 10,000 miles away in Washington D.C. by politicians who couldn’t find the trigger guard on an M-16, Trump’s generals saluted and said yes sir every time they were given yet another absurd mission in furtherance of yet another insane goal in those abject quagmires we’re still waist deep in.

You see, that’s the problem with generals. In order to become one, you’ve got to spend the better part of 30 years saluting and saying yes sir to every half-baked loon who’s above you, so one day, you can get to be the one guy who isn’t a half-baked loon. Except of course by the time you’ve saluted and said yes sir enough times to get stars on your shoulder, you’ve become the half-baked loon you saluted for all those years to get those stars. Which kind of negates the whole “integrity” thing, the fiction that somehow generals have more of this laudable trait than the rest of us do. I guess it takes a whole new kind of “integrity” to serve a man who wakes up every morning and begins the day thumb-thwacking and lies and lies himself so hoarse all day he goes to bed with a lie-scarred sore throat every night.

It’s been an unbroken circle ever since the last war of any consequence we actually won: An increasingly incompetent and amoral political leadership in Washington presides over an increasingly incompetent and amoral leadership in the military. Trump, with his five deferments and his bellicose thumbs isn’t an aberration. He’s the logical product of 70 years of doing the same thing over and over and over again until you finally get really really good at it. And really, really good, in this insane system, give us Trump and his generals.