The confrontational, brilliant artist has turned her social-media account into an interesting 590-piece museum 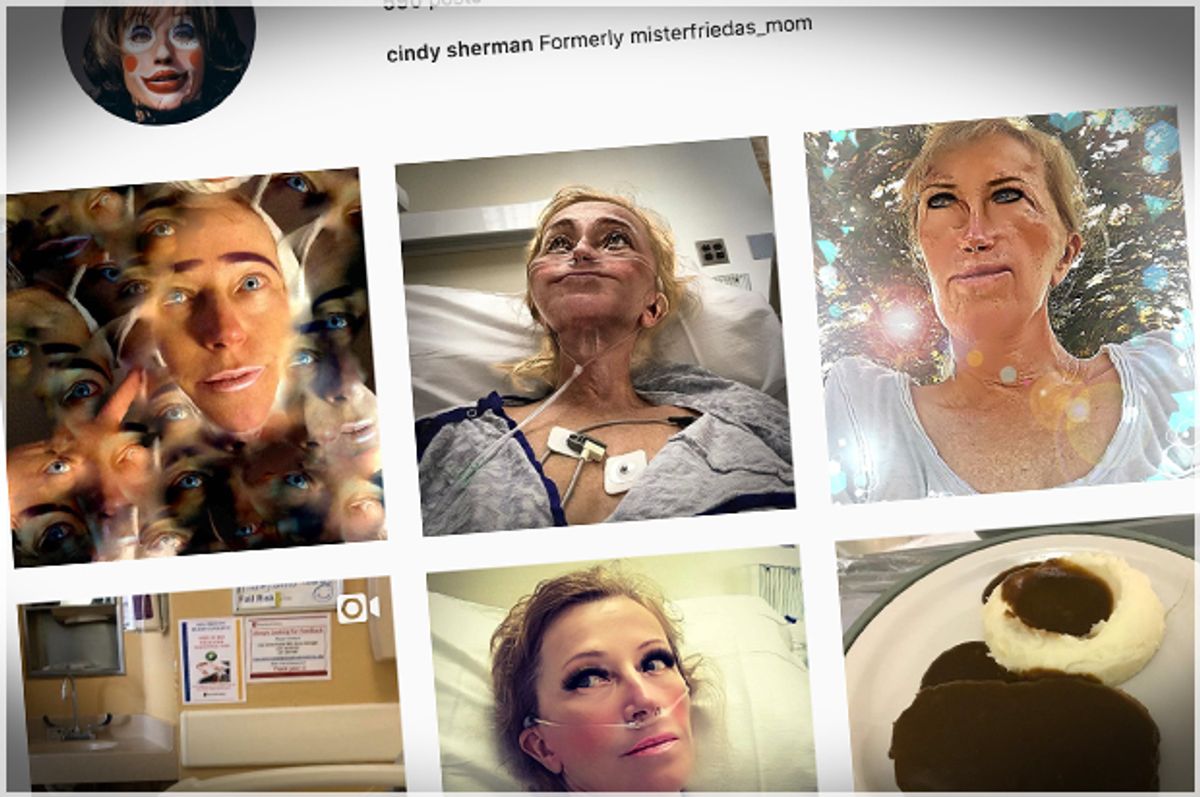 Immediately, 590 images became available to users of the photo-based social-media platform, creating somewhat of an instant, scrollable exhibition. While each individual image is not itself a monumental demonstration of her powers, the account taken as a whole is as relevant to the veteran photographer's body of work as any other piece she has produced in her 40-odd years in the art world.

According to Artnet, the 63-year-old photographer and filmmaker had started the account in October of last year, keeping it private all the while. Today, you can flip through its hundreds of entries. Some of them are fully seemingly innocuous shots of meals, trips to the museum, puddles or other things Sherman came across. Others are haunting, arresting warped versions of Sherman's own face done through either makeup or digital tools available to most smartphone users or anyone with a laptop and an Adobe registration.

Me during filming for Prima Donna @rufuswainwright concert - next Sat June 10th, if you're in Paris at Philharmonie de Paris

Change of pace from pretty landscapes... Circa 1967

As said, each image taken on its own doesn't stand out as a classic of Sherman's considerable oeuvre. Indeed, this may all be an off-the-cuff nothingburger for the artist herself. Yet, the whole is considerable — perhaps most so because, smaller in size and frame, it offers a more strangely intimate variation of some of Sherman's longstanding themes and methods.

The sort of self-transformations you see here have been central and recurring throughout Sherman's photography, be they transformations of her female self to a male self or, very controversially, her white self into a black self. Usually, that plays out in gallery size prints, larger compositions that even when engineered to be off center and off kilter, show a certain clear, understandable geometry.

Here, through the smaller, more cramped medium of Instagram, those transformations of herself and the view through her eye at the rest of the world become more immediate and, at times, more wonderfully disturbing. (Note that it's unclear if Sherman used a smartphone to create all of the images, a camera to capture them or a combination of both).

Whereas a gallery print, say one from her "Disasters and Fairy Tales" series, renders the subject (often a character, often played by Sherman) into a work of confrontational art, these snaps seem more like moments stolen from those character's lives sometimes created by those characters. The unsettling implication one gets from this is that her grotesques — many of them designed to be affronts to the male gaze, beauty standards or really any establishment notion you've got lying around — live in our world. Here, they've broken out of the museum or the coffee-table book to share the streets with us, go to brunch like us, photograph their meals like us. Hell, they are us.

That's not to say that all or any of these works is superior to Sherman's previous output or that she's put as much consideration in this series as any other before it. Indeed, it's unlikely she doesn't see this as a discrete series and we probably shouldn't either.

Yet, Sherman's Instagram account stands as a brilliant use of a medium that's oft been derided not only for its low technical picture quality or tendency to inspire and enable narcissistic (and sometimes self-destructive) behaviors, but a wonderful example of an artist finding new meaning and new effects through injecting the well-traveled, well-acknowledged aspects of their art into a new medium.

As well, it shows a kind of wily adaptiveness, openness and facility with one's own abilities that Sherman's generational peers — including Jeff Koons, Julian Schnabel and others — have lacked as they mature into their late periods. If only more artists could be so fun-seeking and malleable in their 60s.

The fact that her art is suddenly more sharable, more approachable and more available to a wider, younger audience is a rather canny side benefit. Again, this may or may not all be accidental — the takeaways for Sherman appreciators, though, are considerable.

This is, really, the first look we've gotten into Sherman's life from her perspective. Trips to the hospital and days with friends appear — a shift for an artist who, though she appears consistently in her own work, has been remarkably private over the years. It also gives followers more of a look at her process than she normally affords. It's a sign that this is not — as this article may be falsely implying — a conscious work of art. That said, it is certainly the work of an artist.

And, in the fact that it is off-the-cuff in parts, that it is reflective, recursive, gives Sherman's Instagram account its most interesting value. As any other account on Instagram, it is an exercise in self branding, in narcissism, in presenting not who you are, but who you want the world to see (indeed, Instagram and the internet itself is seeing many humans reduce themselves to brands).

But Sherman was well ahead of this trend and, in using this engine for promotional mirror gazing, she undercuts that aspect of it. When she posts, her career-spanning critiques of body image, of the concept of self, of the male gaze, of the commodification of the face and body, bleed over onto Instagram itself. By surfacing her art on this platform for selling yourself, the artist who sells herself with almost every piece of her work shakes it from within.

Or maybe it's a big, ol' nothingburger — just a woman in her 60s taking photos of her macaw. Could be.