Evangelical Christians and Donald Trump: They love him because they don't trust facts or reason 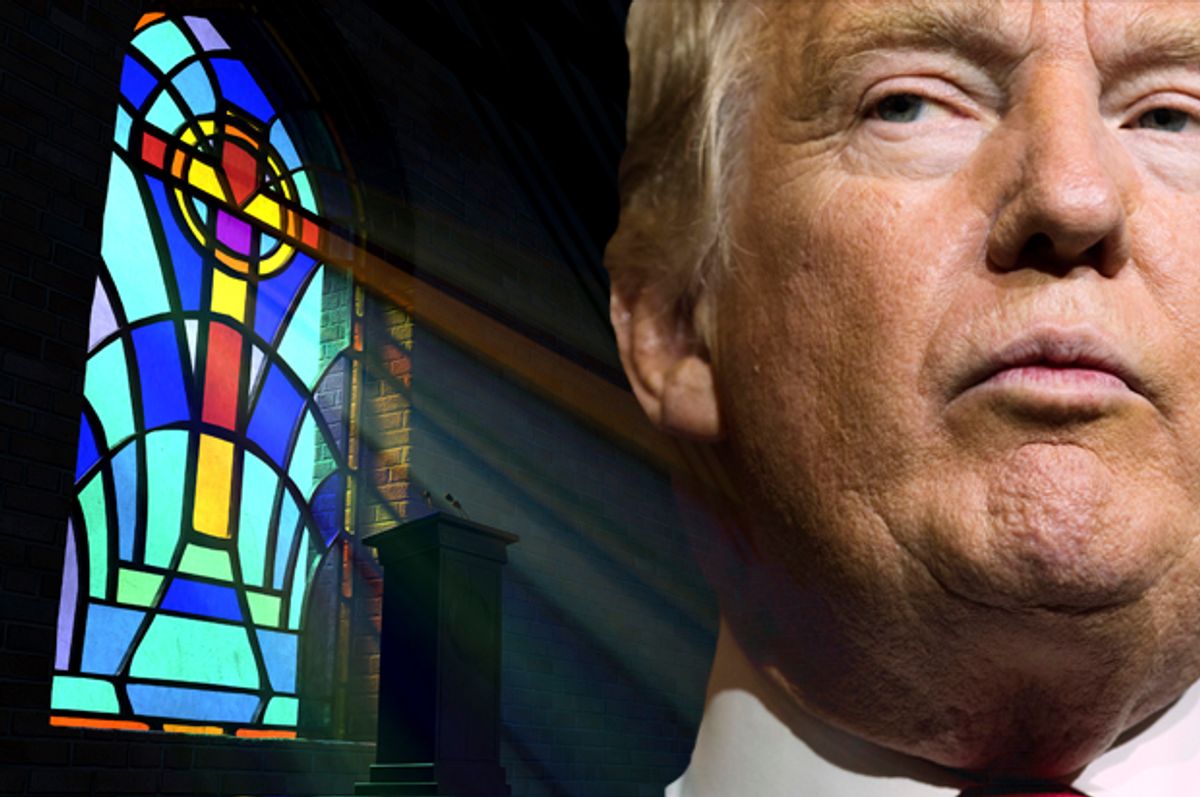 Donald Trump is a man of many notable qualities. He is ignorant and a brute. He has bragged about sexually assaulting women by grabbing them by their genitals. He is a serial womanizer and has been divorced several times. He has also admitted to finding his own daughter sexually attractive. He is a serial liar who adores autocrats and dictators. He may even have gone so far as to collude with Russia and Vladimir Putin to steal the 2016 presidential election. Trump is also violent, moody, vain and impulsive. He does not read and is proudly ignorant.

Why would anyone support such a leader? More specifically, why would any supposed "Christian" support Donald Trump, who appears to represent the antithesis of Christian virtues in so many ways?

But Trump is able to take people of some apparent substance and attainment and destroy them as well. The key though is that he doesn’t destroy them. In his orbit, under some kind of spell, he makes them destroy themselves. It is always a self-destruction. He’s like a black hole. But for this there’s no ready explanation. Because what is the power? The force?

I puzzled over this for some time. Eventually I sensed that Trump wasn’t inducing people’s self-destruction so much as he was acting like a divining rod, revealing rot that existed already but was not apparent. ... The rot was there but hidden. Trump is the moonlight. Perhaps better to say, to invert our metaphor, Trump is the darkness. ...

This seems most palpably the case with the political evangelical community with which Trump has maintained, since early in his campaign, a profound and profoundly cynical mutual embrace. Here I use the term advisedly: I don’t mean evangelical Christians or even conservative evangelical Christians but the evangelical right political faction, which is distinct and different. Nothing I have seen before has more clearly revealed this group’s moral rot than the adoration of Trump, an unchurched hedonist with the moral compass of a predator who is lauded and almost worshipped purely and entirely because he produces political deliverables.

Despite his strong words, Marshall does not go far enough. Christian evangelicals ("Dominionists" and Christian nationalists especially) support Trump because he shares their most important values.

Trump and the Republican Party are waging a crusade to take away women's reproductive rights and freedoms.

Trump and the Republican Party want to remove constitutional and other legal barriers that limit the ability of churches and other religious organizations to engage in overt political lobbying while retaining their tax-exempt status.

Trump and the Republican Party want to destroy the social safety net and believe that wealth and money are indicators of human worth and value. A belief in the "prosperity gospel" and a crude form of Calvinism where money and wealth are signs of being among "the elect" and of God's blessing has been endorsed by many Christian evangelical leaders.

Trump and the Republican Party embrace racism and white supremacy. Southern Baptists and other white Christian evangelical faith communities have a long and deep history of racism against people of color -- especially African-Americans.

There is also a biblical-mythological dimension for why Christian evangelicals support Trump. Many right-wing Christians have convinced themselves that he is a leader in the tradition of Cyrus the Great or King David who, while being deeply flawed, can be used as an instrument of God's will.

There is another factor, rooted in emotion and irrationality, that also helps explain evangelical Christians' support for Donald Trump.

New research published in the Journal of Religion and Health explains it this way:

The studies, based on surveys of more than 900 people, also found some similarities between religious and non-religious people. In both groups the most dogmatic are less adept at analytical thinking, and also less likely to look at issues from other's perspectives. ... The results showed religious participants as a whole had a higher level of dogmatism, empathetic concern and prosocial intentions, while the nonreligious performed better on the measure of analytic reasoning. Decreasing empathy among the nonreligious corresponded to increasing dogmatism.

Professor Anthony Jack highlights the implications of this research for American politics: "With all this talk about fake news, the Trump administration, by emotionally resonating with people, appeals to members of its base while ignoring facts."

Jared Friedman, a co-author of this new research, concludes, "It suggests that religious individuals may cling to certain beliefs, especially those which seem at odds with analytic reasoning, because those beliefs resonate with their moral sentiments."

Christian evangelicals' rejection of empirical reality and their habituation into believing the absurd and the fantastical mates perfectly with the zealotry of the broader American right, which views politics as a form of religious fundamentalism.

Faith, after all, is a matter of believing in that which cannot be proven by normal or empirical means. This definition is a perfect description of both movement conservatism and the Christian right.

Ultimately, Christian evangelicals and Donald Trump are united in an imperfect marriage because they share mutual goals. This is an unholy alliance and, as such, a perfect emblem of today's Republican Party.