The Jane Foster version of the classic hero is not only a critical and financial success, it's a vital step forward 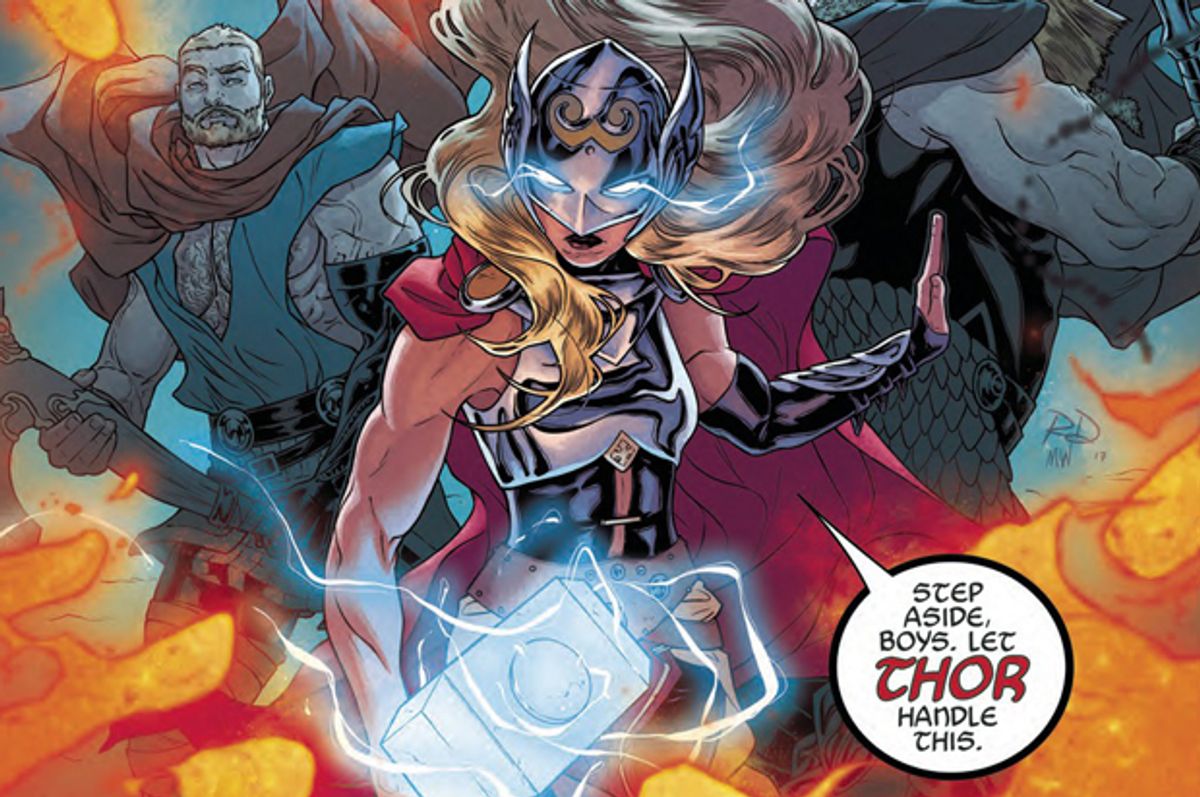 One of the truest clichés of superhero comics is that a replacement hero, subbing for the likes of Superman or Spider-Man, is temporary (along with the sub-cliché that the original white male hero will always be back in time for the latest blockbuster movie, so as not to baffle any casual fans who wander into a comic-book shop).

This cliché has been proven true even when the replacement hero has been a huge artistic and commercial success. When Captain America died during the terrific run of Ed Brubaker and Steve Epting, Bucky Barnes took the shield, and the results were an engrossing espionage series. When Batman was dead (or lost in time or whatever) during Grant Morrison’s 7-year run on the Bat-titles, Dick Grayson became a quippier, more well-adjusted Batman with equal badassness, creating the freshest stories in years. But Bucky and Dick went back to their previous roles of the Winter Solider and Nightwing when Bruce and Steve returned, because that’s how corporate comics roll — in circles, always landing back on the default mode.

The company has been replacement-happy as of late, with a new Captain America, Hulk, Iron Man and Wolverine all at the same time. But one replacement has outshone the rest.

Jane Foster’s tenure as Thor, beginning in 2014, has been a rousing success (it's outsold old male Thor) and a hammer to the face of anti-woman lunkheads. Unfortunately, there are signs that Foster may be headed the way of Bucky and Dick, either through death or a return to secondary-character status. If Thor writer Jason Aaron and his corporate overlords are reading, hear my prayer: by the hammer of Thor, don’t sideline Jane Foster.

Some fans feel diverse character have been shoehorned into older superhero roles, but that criticism is particularly ridiculous when applied to the Asgardian corner of Marvel. A female Thor fits right into the massive epic of Jason Aaron, whose lengthy Thor run (beginning with “God Butcher” in 2012) has been built on Thors, plural, from the start. Writer Aaron (and artist Esad Ribic) began by featuring Thor at three different stages: the stupidity of youth, the relative maturity of adulthood and the jaded weariness of old age. Adding a different gender to the mix broadened an already multifaceted look at godhood.

Female Thor’s identity was originally a mystery, with the first arc running through the possibilities of who she might be till the revelation of Jane Foster—longtime Thor love interest, now a doctor suffering from cancer—as the holder of the hammer. She replaced the usual Thor— now called Odinson—who was no longer worthy of lifting Mjolnir thanks to something more white males could use, self-doubt.

Foster’s life as Thor has been as difficult as the series has been compelling. She’s trying to maintain chemotherapy appointments and her secret identity while fighting misogynistic Asgardian gods and everyone else in a cosmic battle between the various realms of Norse mythology. Thanks to Aaron’s terrific writing and the gorgeous art of Russell Dauterman, the series has been one of Marvel’s best-selling and best-reviewed series.

The commercial success is an especially delicious rebuke to anyone who thinks diversity is killing Marvel. The issue of gender in comics is timelier than ever thanks to a depressing recent incident on Twitter, which should be the name of the Norse realm of the trolls. A group of female Marvel editors were recently blasted with online harassment just for posting a picture of them drinking milkshakes. This picture, no different from thousands posted online every day, somehow drew angry trolls out their holes, issuing rape threats and complaining about how women and SJWs are ruining comics. This burst of ugliness provoked the #makeminemilkshake hashtag, which catalyzed an outpouring of support.

You don’t have to be Heimdall the all-seeing to notice that female Thor is more important than ever in a world where women are treated like garbage, by garbage people, just for daring to work in the comics industry. So let the Odinson keep playing with his ax and keep that hammer right where it is, Marvel.