First Democratic contenders for 2020 are unveiled: For progressives, it's not an inspiring batch

If chameleonic Kamala Harris and corporate-funded Cory Booker are the frontrunners, there could be trouble ahead 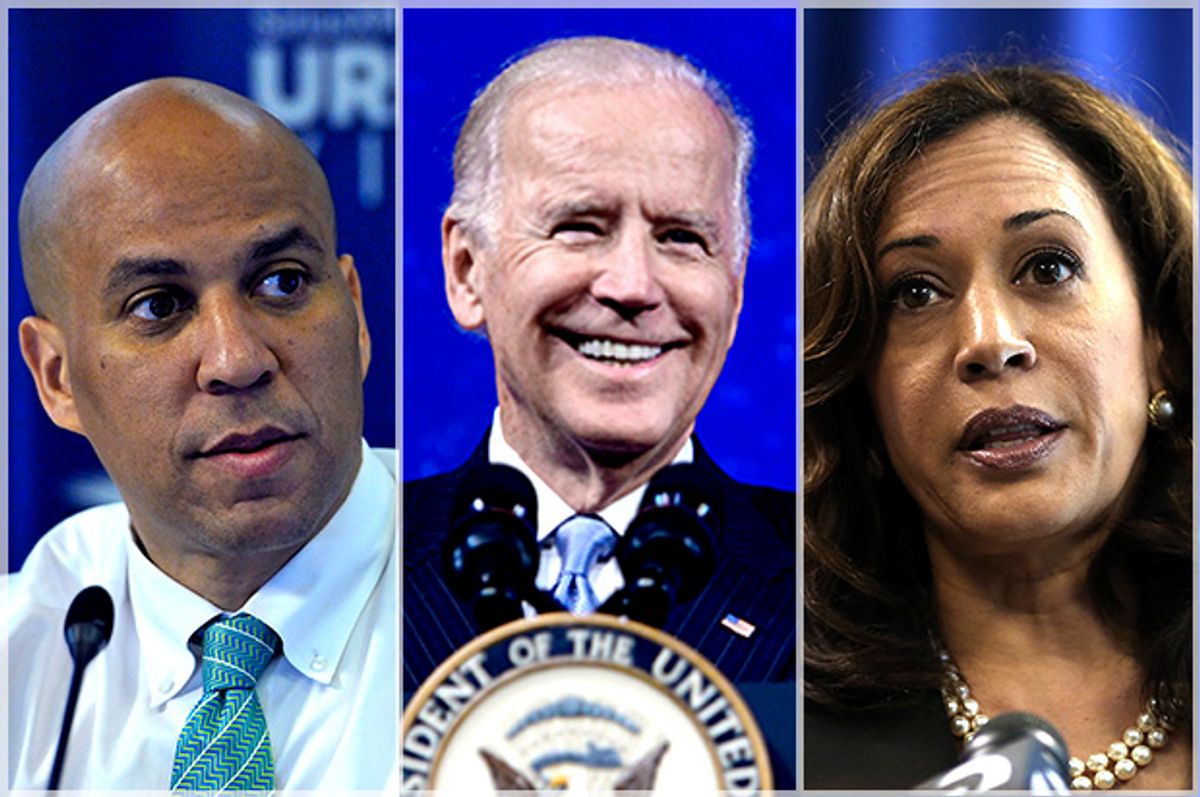 Facebook
Twitter
Reddit
Email
view in app
As the Democratic Party leadership attempts to rebrand the party as populist with its “Better Deal” agenda, establishment Democrats have already started to consider which candidate to get behind for the 2020 election — and, perhaps unsurprisingly, the top picks aren’t exactly populists.

According to a Politico report on Tuesday, former President Barack Obama and his allies have begun to encourage former Massachusetts governor Deval Patrick, who is currently a managing director at Bain Capital (that's Mitt Romney's old firm), to run for the nomination in three years. Other wings of the Democratic establishment seem to be leaning toward Sen. Kamala Harris of California, Sen. Cory Booker of New Jersey, and former Vice President Joe Biden, who will be 77 years old in 2020.

Not surprisingly, progressives have not greeted these prospective candidates with open arms. Harris, for example, who is undeniably becoming a star in the Democratic Party, has been criticized by activists who were connected to the Bernie Sanders campaign. “She is the preferred candidate of extremely wealthy and out-of-touch Democratic party donors,” said Winnie Wong, co-founder of People for Bernie, to Mic. “Her recent anointing is extremely telling. These donors will line her coffers ahead of 2020 and she will have the next two years to craft a message of broad appeal to a rapidly changing electorate.”

There are a number of legitimate criticisms made against Harris for her record as California attorney general, including her failure to prosecute current Treasury Secretary Steve Mnuchin’s bank for foreclosure violations. But the overall problem progressives seem to have with her is that Harris appears politically inconsistent, and shifts positions whenever it is convenient. That's equally true of Cory Booker, a longtime Hillary Clinton ally who has close ties to Wall Street and a history of supporting conservative-friendly policies like school privatization. Booker was formerly close to Betsy DeVos, now Trump’s secretary of education, and sat on the board of her “school choice” advocacy group.

In response to the left-wing criticisms of these potential candidates, liberals have adopted a familiar line of attack, rehashing the 2016 “BernieBro” narrative, which  maintained that leftist opposition to Clinton was rooted in sexism rather than politics or ideology. Clinton ally Neera Tanden responded to the aforementioned Mic article this way:

The following day, Zeisler clarified her position, tweeting that she had not been “sufficiently up” on Harris’ record as attorney general; by then, however, her previous tweet — which implied there was no legitimate political basis for opposing Harris — had been liked by over 25,000 people.

There seem to be two possible explanations for this line of attack on progressives: Either certain liberals have made the cynical decision to smear their opponents instead of engaging in honest debate, or there is genuine confusion about why politicians like Booker and Harris — and Clinton, for that matter — are distrusted by people on the left. One suspects that a large percentage of Clinton loyalists are indeed acting in bad faith, and would rather try to discredit their critics — many of whom are women and people of color — than engage in a debate. But there’s no doubt that some are genuinely bewildered by progressive criticisms of the Democratic Party. The Democratic leadership is, after all, starting take on more of a populist tone, while prominent elected Democrats like Booker and Harris have embraced more progressive policies since last year’s election.

In a recent Jacobin article critiquing the “Better Deal” platform introduced by the Democrats last month, historian Matt Karp expounded on the fundamental difference between the “populist” rhetoric we are currently hearing from neoliberal Democrats like Booker and Senate Minority Leader Chuck Schumer, and the authentic populism that was conveyed by the Bernie Sanders campaign last year:

What distinguished the Bernie Sanders campaign more than any other issue — including his support for free college or Medicare for All — was that he named his enemy. Among his other objectives, Sanders’s attacks on "the 1 percent" were an attempt to reorder American politics around class lines: not with a stale disquisition on stratification, but by tapping into Americans’ anti-billionaire sentiment, religiously excluded from mainstream politics by both parties but thrumming powerfully just below the surface.

This distinction reveals the underlying conflict between leftists and liberals. While the former reject the status quo and believe that a system that produces billionaires and historic levels of inequality must be completely restructured, the latter generally accept the status quo as fixed, and advocate piecemeal reform. If to be a “radical” is to “grasp things by the root,” as Karl Marx once put it, then to be a liberal, one might say, is to look only at the surface of things.

Needless to say, a neoliberal like Cory Booker, who is beloved by Wall Street donors and pharmaceutical companies, is not likely to challenge the economic status quo, since he is a product of it. One can expect leftists to continue criticizing prospective candidates who embody the status quo, irrespective of their ethnicity or gender.