Greed is not good: Will the Trump team disasters finally put an end to the businessman myth? 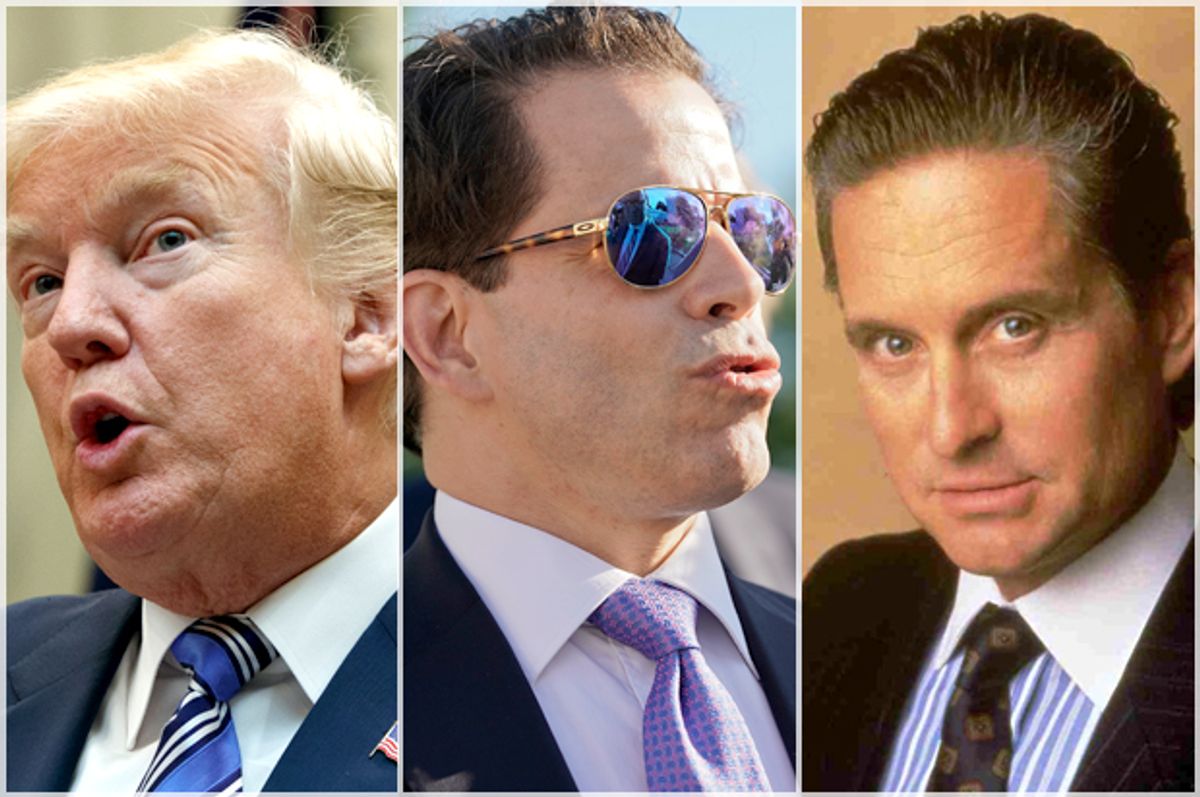 If you were wondering exactly how Anthony "The Mooch" Scaramucci was able to weasel his way into the White House, you have to recall that he wasn’t only a Donald Trump sycophant; he was also touted as a businessman who could “fix” problems career politicians couldn’t. This is the guy who asked Barack Obama what he planned to do about the way that Wall Streeters were being treated like piñatas during a town hall in 2010. And it is the same guy who dropped $100,000 to appear in the sequel to Oliver Stone’s “Wall Street,” the film that brought us Gordon Gekko and his famous line, “Greed is good.”

Forget that Gekko ultimately lands in jail or that the sequel is also designed to make us aware of the unethical behavior of Wall Street types, the Mooch wanted in on “Wall Street: Money Never Sleeps” so badly he was willing to pay a yuuge sum of money for a chance to appear in two brief cameos that amounted to around 15 seconds of screen time. The Mooch wasn’t the only businessman that wanted in on the film. Trump was also set to appear in it, but his scene was eventually cut.

The story of The Mooch and “Wall Street: Money Never Sleeps” is an apt tale to help illustrate how weirdly confused our nation has become over the myth of the businessman. Even though both of Stone’s films focus on how the folks working in Wall Street are crooked, dodgy and dangerous, they each managed to build an aura around the cult of the businessman. Gekko is a criminal, but everyone loves his “greed is good” swagger.

For some bizarre reason the public is aware that businessmen, whether they work on Wall Street or are New York real estate moguls, are often shady, greedy and selfish, but they still believe somehow that they possess critical and valuable skills that could transfer to running government. There is the public sense that businessmen are effective leaders despite overwhelming evidence that businessmen can and have been vile, corrupt and incompetent.

Generalizations are always a fraught enterprise: clearly not all businessmen are terrible people, but that isn’t the point. The point is that the mistaken idea that businessmen are better equipped to run the country is exactly why our nation is poised for catastrophe. And that’s not an exaggeration. We literally have a government being run by a kakistocracy that has no idea whatsoever what they are doing.

Our nation has long held the notion that businessmen are more skilled and trustworthy than politicians. Public trust in government is at a historic low of 20 percent. Even more shocking, a 2015 Gallup poll showed that the public trusted stockbrokers more than senators.

We can track the legend of the businessman back to the Gilded Age or to Ayn Rand or to Ross Perot, but regardless of its historic origin, the key question is whether the complete and utter disaster that is the Donald Trump administration will finally put an end to the delusion that a business background naturally prepares one to hold public office.

Days before the inauguration, Trump stated, “I could actually run my business and run government at the same time.” On the campaign trail we heard repeatedly that he had skills and training that would help him do a better job as president than our nation had ever seen before. In fact his entire campaign was centered on the idea that his business background would not only be adequate, but would actually be better suited to a successful presidency than political experience.

Within months of taking on his new job, Trump later remarked, "This is more work than in my previous life. I thought it would be easier." It was a clear sign that he didn’t have the slightest clue what the job of president actually entails.

There has been much reflection on how a bigoted blowhard managed to win the election, but there has not been enough attention to the fact that the bigoted blowhard had absolutely no training for the job. Trump is the first person ever elected to the office of president in our nation that has not either served in the military or held public office.

It’s hard to know where to start when describing the stunning failures surrounding the Donald Trump presidency. From hiring competent staff, to identifying the components of the nuclear triad, to hosting heads of state, to launching a legislative agenda, Trump has been a disaster on all fronts.

Put simply, there is not one facet of the job of president that Trump seems to have gotten even remotely right. Only a few months into the job it was stunningly clear that Trump wasn’t just addicted to attention and overwhelmed by poor impulse control, but that he really didn’t understand the job he had been elected to do. In a piece for U.S. News and World Report, Robert Schlesinger marveled at “the litany of things that were apparently astonishing to the new president which would come as a surprise to no one who has paid more than a passing amount of attention to national and international affairs.”

Here’s the thing. Politicians make campaign promises all the time that they know full well they will have a hard time delivering. But Trump literally thought he could do things like terminate NAFTA, pull out of NATO and force China to control North Korea. And then there’s the jaw dropping moment when Trump blathered, "Nobody knew health care could be so complicated."

The list is literally endless at this point. But part of the reason why it is so long is because Trump had no idea how the shared governance of a democracy functions or what it means to work with allies because in his businessman model he really can make absolute decisions without building consensus or making compromises. He has zero appreciation for the notion of the public good, of the value in supporting allies and of the need to respect the opinions of other leaders.

Much has been made about his authoritarian impulses and his dictatorial qualities. But face it; he would be a lousy dictator, too. Even despots know that they have to build alliances and garner popular support. Less than 200 days into his presidency, Trump is at a new all-time low in support with only about one-third of voters approving of him. Most dictators would be worried at those numbers, but Trump blusters on.

Meanwhile his constant threats to fire anyone he disagrees with have created a White House staff with more turnover than we have ever seen. Acting Attorney General Sally Yates, National Security Advisor Michael Flynn, FBI Director James Comey, Press Secretary Sean Spicer, Chief of Staff Reince Priebus, Communications Director Mike Dubke, Communications Director Anthony Scaramucci are only at the top of the list of those who have been fired or have resigned.

During the Obama era, Larry Sabato pointed out in Politico that between 1946 and 2014 there were only about 35 significant involuntary departures of top White House officials. Sure, presidents see considerable turnover when their administrations come under crisis, but the level of turnover in Trump’s team is directly tied to his “you’re fired” mentality. It’s also directly linked to his businessman swagger. And it’s a clear sign that he doesn’t have the leadership skills of a trained politician.

And that brings me back to The Mooch, yet another sign of a businessman who has no business in government. Back when he asked his question of Obama in 2010, Jon Stewart decided to do a bit on him for “The Daily Show." Stewart quickly pointed out that the Mooch’s question about being a piñata was bizarre.

How could he characterize Wall Streeters as victims?  Hadn’t they been bailed out by the government? And hadn’t they actually done some pretty vile things to attract public outcry? As Stewart addressed the Mooch on camera he admonished him for characterizing himself as a piñata that had been whacked unfairly. “Until your papier-mâché bellies are no longer stuffed with government money, walk it off.”

The crazy part of that story, in keeping with the story of The Mooch paying to be in the sequel to “Wall Street,” is that seven years later this is the kind of guy who gets hired in the White House. The Mooch might be gone, but like the whack-a-mole that is the Trump team, you can be sure there is another one just like him waiting to pop up.

None of this mess gets better until this nation takes responsibility for its unfounded adoration of businessmen. The notion that a businessman is better at politics than a politician isn’t just wrong; it’s led to the Trump administration. And if that doesn’t kill the myth, I don’t know what can.