Notes from a trailing spouse: A drive in the desert without my dad 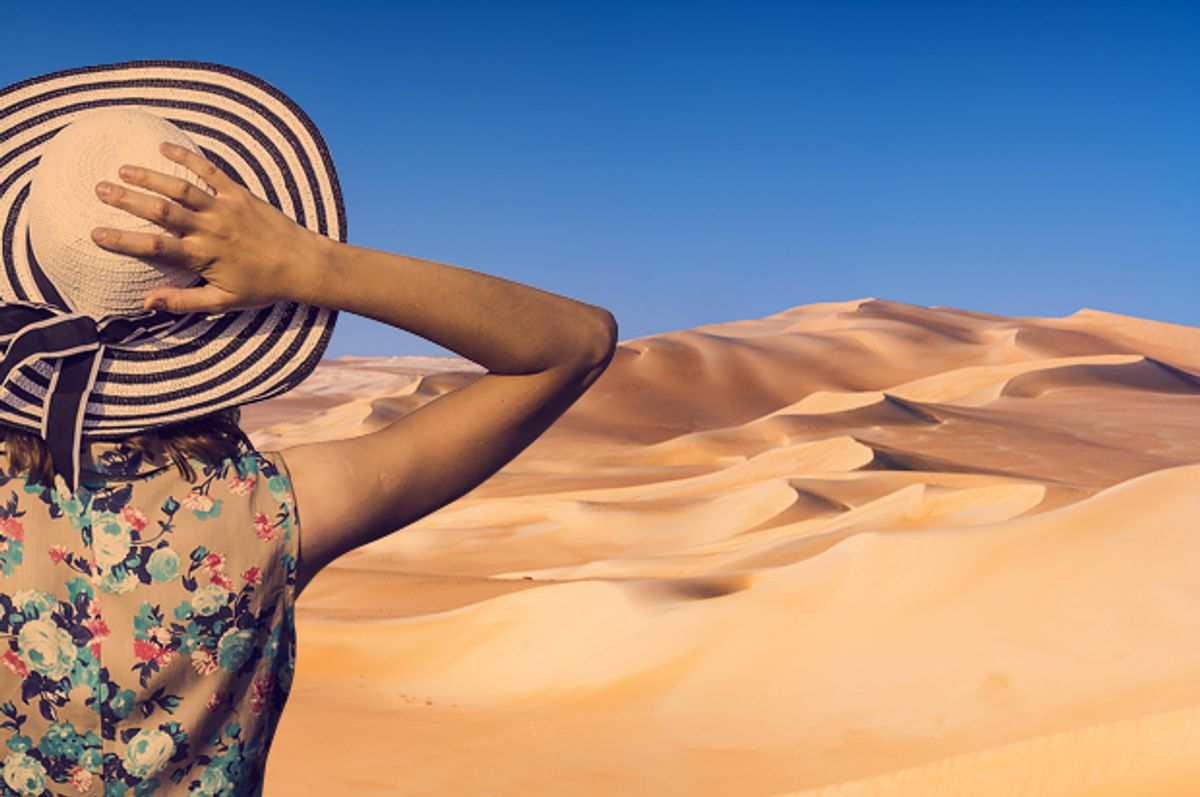 I am stepping into one of six vintage Land Rovers all lined up to take us desert-farers deep into the true heart of the UAE. My driver has wrapped a scarf around my head, and for a moment my shadow makes a credible impression of Lawrence of Arabia — or at least Peter O’Toole — as he flits around in his regal Arab garb until Anthony Quinn comes and ruins all his fun.

But what has me by the throat is the ineffable smell of the Land Rovers. Oil, diesel, sweat, engine, heat.

And I am brought back to a time just after my parents had divorced. I was 12 years old and every Thursday night, so my mother could have some “alone time” with her new boyfriend, my sister and I made a pilgrimage over to my father’s house so we could have some “family time” with his new wife and her son. I remember those dinners mostly for the clean cloth napkins (if we bothered with cloth napkins at home, they tended to be so filthy they lay in near origami shapes beside the plate) and the effort put into each meal. Naturally, there were tensions; namely, my sister and I had this crazy notion that we wanted, needed, to be alone with our father and have some adventure just the three of us. My father’s youth, at least to us, seemed so full of romance — an RAF pilot, a reporter on Fleet Street, a man who dabbled in car racing — that we assumed that his desire for adventure must still be festering just beneath his day-to-day life as a thrice-married man carrying the burden of alimony, children from two different women, an adopted son and a new marriage.

For me, it was a trip to the Arctic. I knew nothing about the place other than that it was north of my hometown of Montreal, it had polar bears and no trees. But I would spend hours as a little kid imagining him and me, parka-clad, setting out across the tundra. Not every girl’s dream but one I think was spawned by the fact that my father didn’t know what to do with children. The refrain that rang through my youth was “Children should be seen but not heard.” But he didn't want children, heard  or unheard. What he wanted was smart mini-adults. No running noses, no temper tantrums, no whining.

In pursuit of this, for my 7th birthday, he gave me T.E. Lawrence’s "Seven Pillars of Wisdom." On my 8th, a hunting knife. Both utterly baffling gifts. Where the hell was the Suzy Homemaker Oven that I asked for?

I remember lying in bed that night, tentatively opening the huge tome and reading. For years we lived some how with one another in the naked desert, under the indifferent heaven. By day the hot sun fermented us; and we were dizzied by the beating wind. At night we were stained by dew, and shamed into pettiness by the innumerable silences of the stars.

I was a 7-year-old girl in a city clad in snow, and while each word made sense, I couldn’t even begin to fathom what on earth Lawrence was talking about. Silences of the stars? Within a day or two I put it away on my shelf to join all the other incomprehensible books I had received over the years, most of them, I might add, sent by his family in England. There "Seven Pillars of Wisdom" sat, leaned up against Somerset Maugham’s "Of Human Bondage," which I had received the Christmas before, and the complete set of P.G Wodehouse’s Jeeves series that I got for my 6th birthday. It suddenly occurs to me that my father’s family were collectively out of their minds.

Neither my sister Sophie nor I ever got to have a real alone adventure with my father, at least not one where we went off into the wild. What we did have was the drive home after dinner. In those days he had an old Land Rover, a beast of a truck, with torn, hard seats and no heating. I’ve been told that the engine is supposed to supply one with warmth, but I think on those 10 below nights his Landy hogged all the heat for its own selfish purposes. My father loved that truck and, to demonstrate its pedigree, he liked nothing more than to run the thing full bore up snow banks after slaloming down the steep snowy hills of our neighborhood.  I can still hear the low growl of the engine as it (plenty warm now) worked in tandem with my father’s deft gear shifting to extricate us from some high icy mount in order to deliver his half-frozen daughters safely home.

My father died in 2014, a year before my husband and I moved to Abu Dhabi, but here I am stepping into his truck. And already I am getting into a rage. Our little caravan pulls out, slowly. I look at the driver. We are going to pick up speed, right? We are going to take our lives in our hands and go flying over the dunes that are rising so majestically in front of us? Apparently not. Even my pressing an imaginary gas pedal to the floor doesn’t speed things up.

"This is my adventure," I want to cry out. "This is what my father and I never got to do. You can’t be serious with this putt, putt, putting up the hill?"

With the world going past me at a crawl, I start to look around. To my left is a 20-foot-high chain-link fence topped with razor wire that seems to stretch for miles. Bedouin tribes traveled thither and yon for much of the millennia. With oil and modernity, their endless sands suddenly had value, and soon fences were put up. Still, it’s a little jarring. Chain-link fences are not part of my romantic notion of the desert. I try to block it out; after all, right in front of me are little desert deer. Cute but they did appear suspiciously on cue. I think of my father telling me that now that I had my hunting knife I could, if need be, slit an animal open from stem to stern and weather a storm sheltering in its warm entrails. He was full of practical advice like that. Naturally, now in the desert I try to imagine how I would survive if the five Land Rovers following me at a bovine pace, the skyline of Dubai, not to mention the authentic Bedouin camp all set up and ready not only to feed us but entertain us with sword fights and dancing girls, were all to disappear. What would I do?

Let’s face it: My moment as an intrepid survivor, sucking out snake venom, building lean-tos, supping on grubs, fending off nocturnal attackers (though as a woman, I am schooled somewhat in that art) is as distant and improbable as the little girl heading out across the tundra with her dad.

But I’m here and I have a hidden flask so I might as well get into the swing of things. There’s a camel to ride and giggling women who are willing to henna my hands.

As the evening sets in and we gather to look at the night sky, I still hold out hope that if I just scratch at this sand, I will find the adventure, the romance. Then I look up and there, high above me, “the innumerable silences of the stars.”