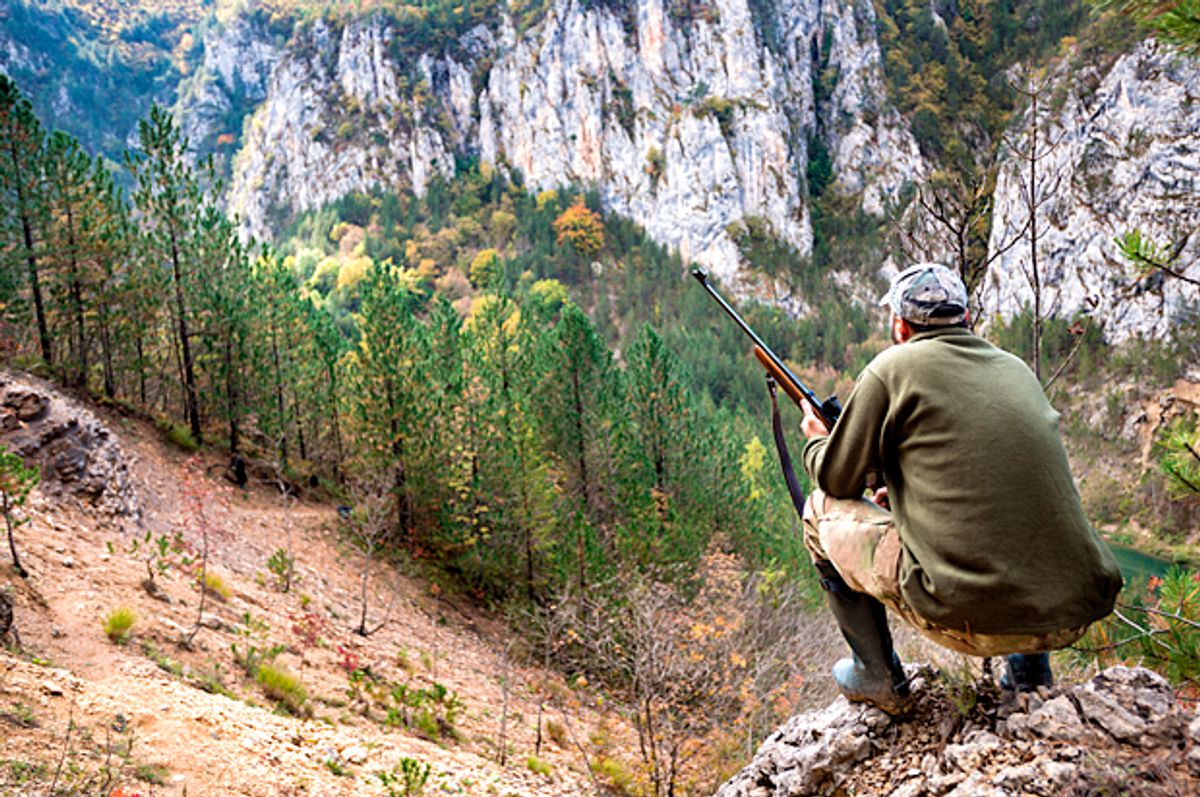 The British public were outraged this week by news that Stan Kroenke, owner of the popular London soccer club Arsenal, planned to launch a TV channel dedicated to trophy hunting. Kroenke reportedly envisioned a subscription channel that would air footage of the hunting and killing of vulnerable African species like elephants and lions.

After enormous outcry, the American billionaire has now backtracked and decided to pull all footage related to big game animals from the channel. But let’s not give him too much credit.

Before the public backlash, Simon Barr, a spokesperson for My Outdoor TV -- the name of Kroenke's channel -- had defended its programming in the most absurd ways. Barr assured people that the channel would only show legal and “ethical hunts” — whatever that means. He also claimed it would air “fair chase” hunts only.

I’m not sure how men stalking and shooting animals with guns is fair, but maybe I just don’t get it. After all, I don’t have the stomach to watch any of the clips available online. The descriptions are quite enough to sicken any normal person.

“There’s no other feeling in the world quite like it,” says one hunter after killing an elephant. In another scene, a man shoots a critically endangered elephant. It charges him and two more shots are fired. The elephant falls to the ground and dies.

Trophy hunting of that kind is brutal and depraved. There is nothing “ethical” or “fair” about it.

Proponents of the sick sport like to point to the debunked claim that the thousands of dollars rich Westerners pay for the "right" to slaughter wild, majestic animals goes toward conservation efforts.

Let’s be honest. This is not about conservation. It’s about rich people getting their kicks and thrills from killing animals for a power rush. They just do it under the guise of conservation.

In 2016, the House Committee on Natural Resources released a report that poked holes in the claim that killing endangered species somehow helps conserve their populations. It found that overall, trophy hunting was having negative effects on the populations of African lions and leopards. Elephant hunting and poaching is also outpacing the natural reproductive rate of the species, causing “unsustainable loss of elephants annually.”

The report found there was no guarantee that any of the revenue generated through trophy hunting was directed toward conservation efforts. After all, official corruption is endemic in African countries like Zimbabwe and Tanzania, where trophy hunting is common.

Such corruption, combined with the pressure and expectation hunters feel to return home with a trophy, ensures that shortcuts will be taken. Incidents of baiting and drugging animals, hunting in small enclosures and using vehicles to aid in hunts are not uncommon, according to the report. A separate study in 2013 found that hunting tour operators donated only 3 percent of their revenues to local communities for conservation efforts.

Even in countries with less corruption, there are serious concerns about the ability of government officials to manage wildlife populations and control hunting. And the situation is dire. Latest estimates say African elephants could be extinct within 15 years. African lion populations have plummeted about 42 percent in the past 21 years.

In the United States, the Fish and Wildlife Service is responsible for regulating the import of "trophies’" brought into the country. The criteria states that only trophies that “enhance the population or survival of the affected species” will be granted an import permit. Reports have shown there are loopholes that allow rich Western hunters to get around this.

When Cecil the lion was killed by American tourist Walter Palmer, having been lured out of his protected habitat, it rightly outraged millions of people around the world. Palmer paid $55,000 to kill Cecil — whom he first shot with an arrow, tracked, shot dead and then skinned and beheaded.

Perhaps the most famous trophy hunters in the world now are President Donald Trump’s sons. As for Trump himself, it is hard to figure out where he stands on the issue. When his sons faced backlash in 2012 for posing with dead lions, leopards and other animals, Trump tweeted that he is not a hunter and “strongly disagrees” with his sons. In a 2016 interview with Outdoor Life when he was running for president, however, Trump said he has been hunting with his sons and would “love to” do it again. So go figure.

Last summer, at the tail end of a journey across Russia by train, I visited a Siberian tiger sanctuary in the Primorsky Krai region. On a train somewhere between Irkutsk and Ulan Ude, I emailed the staff who work there and asked if they would be willing to show me around. They kindly obliged. We met and drove an hour outside Vladivostok to the village of Alekseevka, battling the heat and increasingly uneven roads.

We were shown around in almost complete silence. The tigers were not in view, so we had to observe them on cameras from an ant-infested prefab structure outside the fences.

Paying thousands of dollars to shoot endangered species for a thrill does not make you a conservationist. That’s just blood money.

Years before visiting Alekseevka, I had been lucky enough to go on a safari trip in South Africa. Seeing elephants, lions, giraffes and wildebeest in the wild is a humbling experience. At least, it should be. If you’re lucky enough to happen upon these animals in their natural settings, rather than behind bars or a glass screen at the zoo, it is a privilege — not an opportunity to show off your macho killing skills.

In fact, the most manly thing to do would be to respect those animals and marvel at their strength and importance — and the only thing you should be pointing at them is a camera.

Kroenke’s channel was set to profit from this depraved sport in the UK until people spoke up. If these thrill seekers really want to help conservation efforts, there are plenty of ways for them to do that — and none of them involve killing animals for fun.