More than six months in, what has Trump actually done in the war on terror?

Without clear exit strategies across our various conflicts in the Middle East, crises seem to be expanding 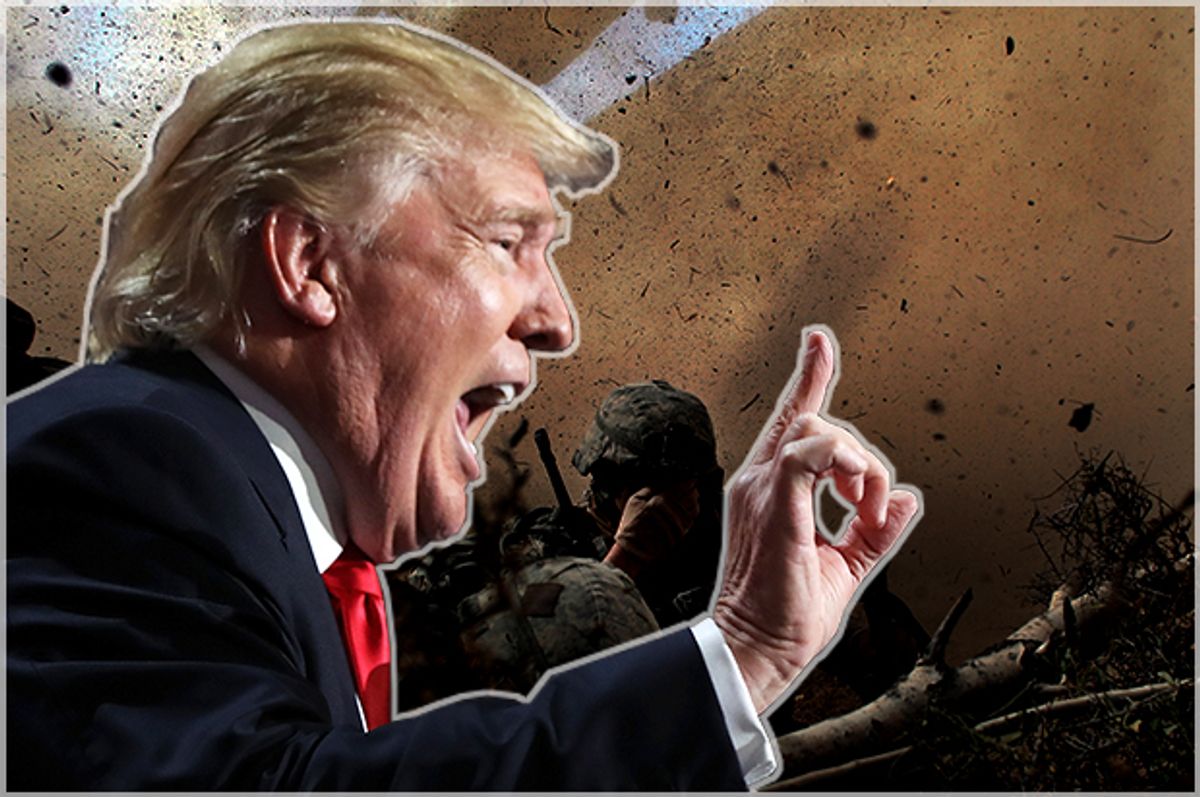 President Donald Trump proudly campaigned on an aggressive foreign policy that never included any actual plans for handling the U.S. wars he would inherit abroad, including any concrete strategy to defeat the Islamic State.

These visions were often oversimplified and often failed to consider inevitable civilian deaths. He frequently stated he would just "bomb the shit out of" his enemies, without a clear end strategy in mind or any regard for what life might be like for citizens after U.S. involvement.

The campaign against ISIS

In mid-July, Airwars, an organization that monitors international airstrikes in Iraq, Syria and Libya, determined that in the first five months after Trump took office, the U.S.-led coalition killed more than 2,200 civilians. That's roughly 440 per month.

Researchers estimated that under former President Barack Obama's administration, "at least 2,300 civilians likely died from Coalition strikes" since August 2014. Trump has killed almost as many in around 14 percent of the time. Of course, these numbers — and the increase in them — matter little to the civilians they represent: they're dead either way.

It's crucial to note that Trump inherited the war amidst a major ground and air campaign against Mosul, the Islamic State's major stronghold in Iraq. Obama also bequeathed him the situation in Raqqa, Syria. Both those cities are densely populated. The 44th president also escalated the use of drones against targets in Iraq, Afghanistan and beyond. Yet, the spike in civilian deaths is notable, and Trump's responsibility no matter how you cook it.

A number of factors appear responsible for the steep recent rise in civilian deaths — some policy-related, others reflecting a changing battlespace as the war enters its toughest phase. In one of his first moves as president, Trump ordered a new counter-ISIS plan be drawn up. Second on his list of requests were recommended “changes to any United States rules of engagement and other United States policy restrictions that exceed the requirements of international law regarding the use of force against ISIS.”

In short, Trump was demanding that the Pentagon take a fresh look at protections for civilians on the battlefield except those specifically required by international law. That represented a major shift from decades of U.S. military doctrine, which has generally made central the protection of civilians in war.

In a later interview on May 19, Secretary of Defense James Mattis said, "two significant changes resulted from President Trump’s reviews of our findings."

"First, he delegated authority to the right level to aggressively and in a timely manner move against enemy vulnerabilities. Second, he directed a tactical shift from shoving ISIS out of safe locations in an attrition fight to surrounding the enemy in their strongholds so we can annihilate ISIS," Mattis explained, according to the Daily Beast.

The entire report provides insight into the president's first six months of battling ISIS. But U.S. involvement in the Middle East stretches further than just ISIS strongholds, as many Americans have basically all but forgotten the 16-year-long war in Afghanistan.

The endless war in Afghanistan

In recent months and years, the Taliban has mounted a resurgence, becoming perhaps stronger since any time after the 2001 U.S. invasion. The group now controls or is contesting 40 percent of the country — more than it has possessed in the long, long war. At this time, Trump's only full stated interest in the war has reportedly been to extract minerals from the country, and to utilize Blackwater founder Erik Prince, the brother of Education Secretary Betsy DeVos, as he looks to privatize aspects of the conflict.

Trump has grown ever more frustrated with the war that, to be mildly fair to him, has never had a clear exit strategy. He has threatened to fire the war's top military commander, Gen. John Nicholson, because Trump says he is losing the war, according to NBC. Trump has yet to even meet Nicholson. "What set Trump apart" from previous presidents who have changed strategies in Afghanistan, NBC reported, "was his open questioning of the quality of the advice he was receiving."

Leaders and militants killed under Trump

In terms of progress against key terrorist leaders under Trump, the Pentagon said that the leader of ISIS in Afghanistan was killed in a drone strike in mid-July, according to the New York Times. When the U.S. dropped the "mother of all bombs" on the ISIS affiliate in Afghanistan in April, it was reported that at least 92 militants were killed, including several mid-level commanders, according to the Guardian. In May, the Pentagon announced that three senior ISIS military leaders in Syria had been killed in Coalition airstrikes.

However, it's unclear how much progress this represents in actuality as in the past leaders have been killed, only to be immediately replaced. Though ISIS may be in the midst of losing vital territory, their influence on a global scale represents a much more complex, and lengthier battle.

Civilians deaths have also damaged U.S. credibility in the region. In March the military bombed parts of a mosque in Syria that they believed was a meeting place for al-Qaeda militants. The strike killed 38 civilians and the Pentagon denied having done so, insisting it was an al-Qaeda meeting, only to later admit the truth.

"During the final 193 days of Obama’s presidency, there were 21 such operations" within those countries, according to Foreign Policy. "Over a comparable number of days under President Trump, there have been five times as many operations: at least 92 in Yemen, four in Pakistan, and six in Somalia."

Special operations forces "are reticent to simply kill suspected terrorists," Foreign Policy reported. "Instead, they express a distinct preference for capturing terrorist suspects — a dead terrorist cannot provide the intelligence that allows special operators to increase their situational awareness of a given country."

In his current role, Votel recently played down the enduring utility of killing terrorists when asked about the reported death of Islamic State leader Abu Bakr al-Baghdadi: “We’ve been doing this long enough to know that leaders are killed and we’ve killed plenty of them. And that there’s always somebody who is going to step up into those positions.” The degradation of command and control to the Islamic State — or any of the other many targeted militant armies — may appear meaningful at the time, but over the long term special operators recognize that they are ephemeral.

No easy way out

All of this highlights that Trump has no clear path out of conflicts Middle East, and he hasn't expressed ways in which he hopes to actually improve conditions other than broad statements targeting overall victory. We haven't even delved into the other facet of the ongoing conflict in Syria regarding President Bashar al-Assad and his support from Russia. Trump has adamantly opposed refugees entering the country, and reduced the number allowed in the country each year in the new immigration bill he endorsed this week.

As crises continue to worsen for refugees, one campaign promise has been kept by the president: He's certainly "bombing the shit" out of people.