Is the Trump International Hotel a sign that the Gilded Age is back?

The landmark DC hotel bearing Trump’s name has become ground zero for the rich seeking the powerful, and vice-versa 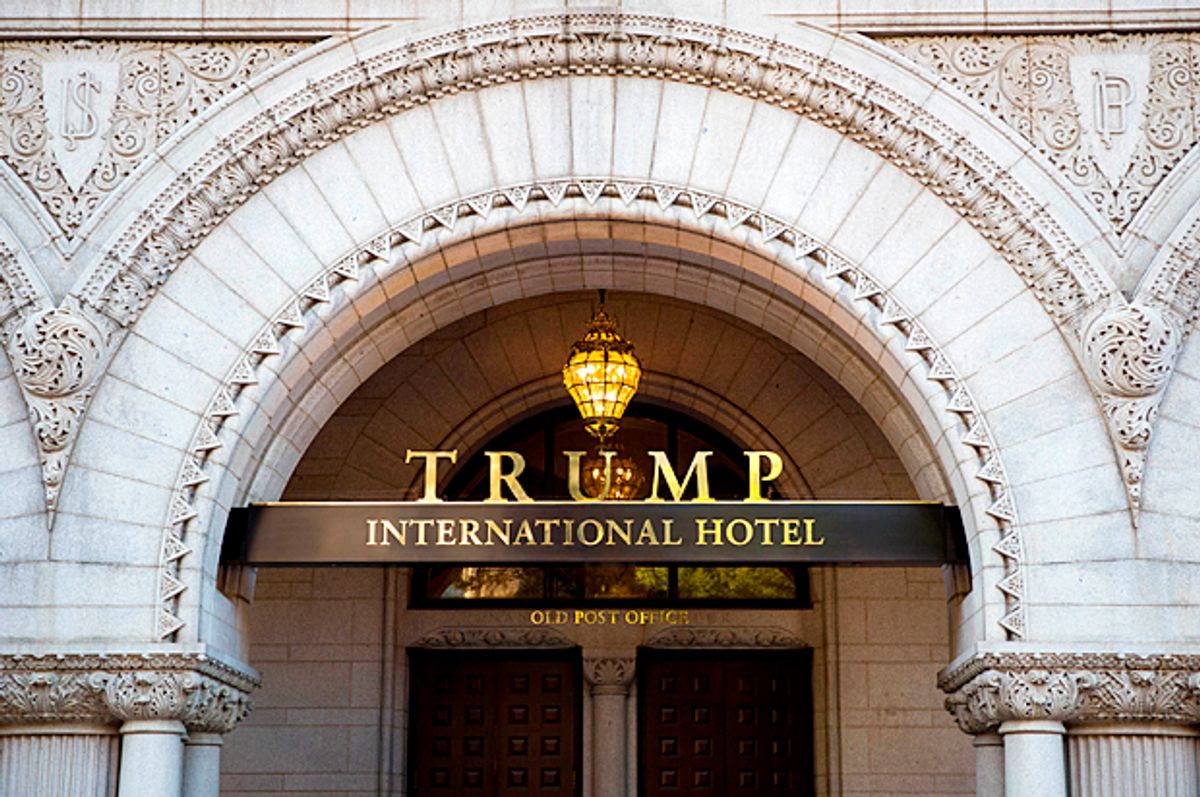 When a group of veterans came to Washington D.C. earlier this year to lobby against a law allowing victims of the 9/11 terrorist attacks to sue the Saudi Arabian government, their venue of choice raised eyebrows inside and outside the beltway.

The nation’s capital isn’t exactly bereft of lodging for groups seeking political favor, but instead of booking rooms at the nearby Willard InterContinental, the Mandarin Oriental or the Ritz-Carlton, the veterans group chose to stay at the Trump International Hotel.

In May, according to lobbying-activity filings, the veterans racked up nearly $540,000 in charges at the converted 119-year-old historic Old Post Office Pavilion. The tab for staying at the posh, 263-room hotel was picked up by a group that is well accustomed to powerful and connected family dynasties: the Saudi Arabian government, which orchestrated the campaign.

According to an in-depth analysis by The Washington Post published on Monday, the latest hospitality asset of the Trump Organization has become “a kind of White House annex” where the rich seek to rub shoulders with the powerful, and vice versa, a venue that is actively “capitalizing on the president’s popularity” while also enriching the president’s family-owned business ventures managed by President Donald Trump’s sons, Eric and Donald Jr.

Is this an emoluments clause violation?

The preponderance of lobbyists staying at the president's hotel has led to numerous lawsuits arguing that Trump is trying to profit from his name and position. Rivals in D.C.’s lucrative conventions business have complained that the Trump International Hotel has an unfair advantage because of the perception it has as being a means to curry favor with the president and congressional Republicans. Citizens for Responsibility and Ethics in Washington, a nonprofit group, and others have sued on the basis that Trump’s connection to the hotel violates the emoluments clause of the Constitution that prohibits gifts from entities of foreign states.

In a bid to allay these concerns, Trump agreed to channel all of the hotel’s profits from foreign government officials to the U.S. Treasury. But critics argue that this isn’t enough and that even if staying or booking events at the hotel doesn’t grants people special favors, it is still a private, family-run enterprise that is profiting from its ties to the White House.

Because the property is a historic site, the Trump Organization pays the General Services Administration $3 million in annual rent. In less than nine months, the hotel has generated nearly $20 million in revenue since its opening in September, according to the president’s recent financial disclosure. How much of that is profit is unknown, since the Trump Organization is a private holding company that isn’t required to disclose financial details beyond what’s required by Trump’s role as president.

“I can’t believe that there’s any court that will say the emoluments clause does not apply here, notwithstanding that it has never been tried in court before,” Eleanor Holmes Norton, a Democratic Party D.C. delegate told the Post.

The hotel’s 19th century Romanesque architecture isn’t the only architectural feature that seems like a throwback to America’s Gilded Age. Rooms costs $400 per night or more. The hotel’s bar serves $2,500 bottles of champagne and vodka cocktail, caviar and oyster combos that go for $100.

Lured as much by each other as the hotel’s beautiful facades, ranking U.S. government officials, diplomats hoping to curry favors and Republican lawmakers holding expansive fundraisers are regulars at the hotel. Treasury Secretary Steve Mnuchin lived in the hotel for six months.

There is no historical precedent for Trump's ability to profit off his presidency in this manner. With the exception of the profits from foreign government officials, every dollar spent by high ranking government officials, by partisan fundraisers, by the powerful hoping to connect with White House insiders, by anyone who passes into meeting areas restricted to other hotel patrons, helps to enrich the president’s own relatives and, by default, the president himself. Furthermore, nobody knows how much taxpayer money has been channeled through the services of the Trump family-owned hotel.

The president himself has used the Trump hotel to raise funds for his own campaign. His frequent trips to other Trump branded properties — including the Trump National Golf Club in Bedminster, New Jersey, where he is currently vacationing — raise questions about just how much the president stands to personally gain from his role as president. Once Trump returns to private life, he may very well return to heading a business empire that was immensely enriched by his many golf vacations to his own properties.