A T-shirt company tried to "reclaim" the swastika; it did not go well

KA Designs is selling clothing emblazoned with the Nazi-associated symbol 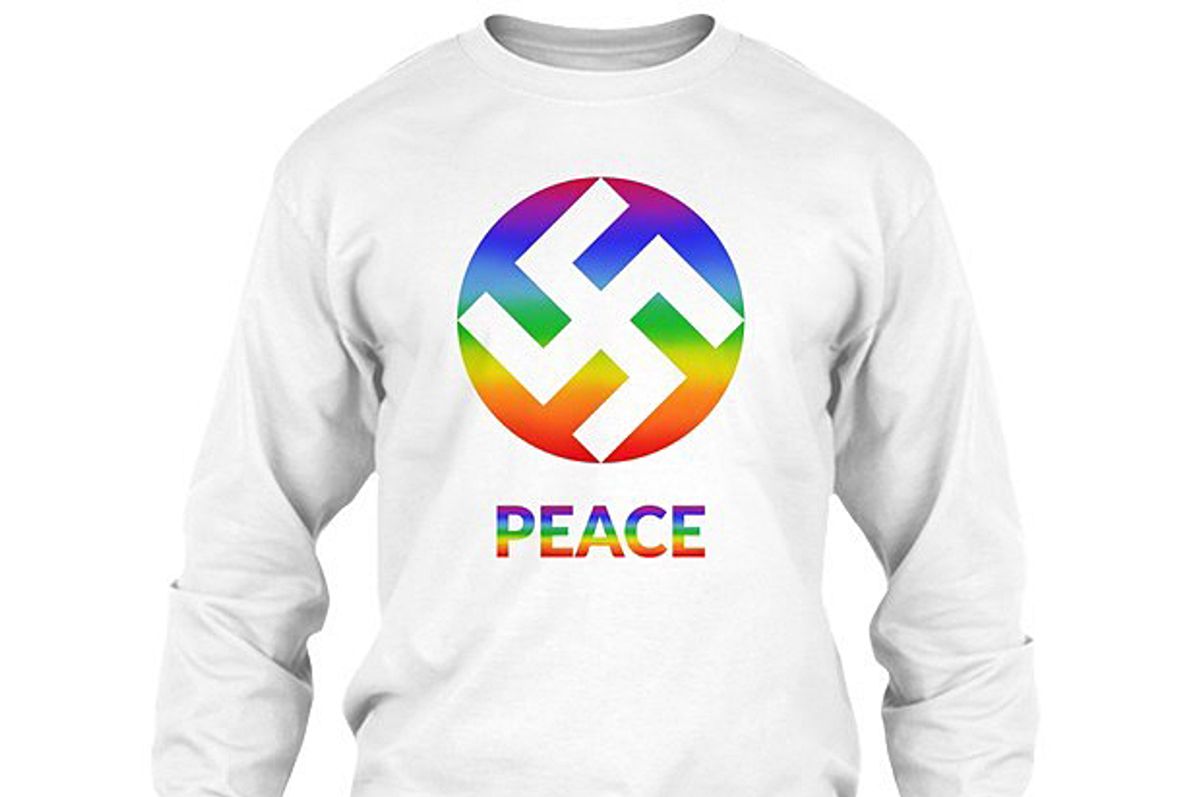 According to one ill-informed retailer, nothing says "freedom" and "peace" more than wearing a t-shirt adorned with a bright, white swastika.

KA Designs, a European clothing company, has made it their mission to reclaim the Nazi symbol by marketing clothing with swastikas on them, which — to most people with a moral compass and a general knowledge of European history — was perhaps a poor design and marketing choice.

In a video posted on their Facebook page, the company explained their strategy for rebranding the symbol.

All of this is true. It is in the next part of the company's statement, however, that things go awry.

Reclaiming racist imagery and rhetoric isn't a new trend. Following a Supreme Court ruling in June that struck down a law denying trademark protections for racial slurs, some companies requested to trademark the n-word as a way to "reclaim" the meaning of the word. But unfortunately for KA Designs, most people weren't so willing to jump on the racist symbol reclamation train.

The Israeli Jewish Congress shut down the company's marketing campaign. “It is obscene and disgusting that Teespring would seek to profit of this in the name of art, trying to turn this irredeemable Nazi symbol of hate and murder, into a symbol of ‘love and peace,’” IJC head Arsen Ostrovsky said on Facebook.

The Auschwitz Memorial Museum even vocalized their aversion to the designs. "You will not escape from the fact that [the] swastika was turned by Nazis into a symbol of racism, hate, antisemitism and mass murder," the museum said in a statement.

People have even taken to Twitter to express their disgust with the promotion of the swastika.

“We really like the symbol in its shape and aesthetics, and we would love to share the beauty of this symbol detached from the Hatred associated with it," KA Designs told Dazed.

"The new meanings given to ‘our Swastika’ wouldn’t make any sense if not based on the previous ones. We want to promote love and peace to remind everyone that mankind can be better that what it currently is and was in the past."

Despite their arguments for reclaiming the symbol, the brand later changed its design to feature a "no" symbol over the swastika just days after the collection was released. The brand's decision to rework seems rather an absurd reaction to the controversy, seeing as they're still trying to turn a profit off off of the Nazi-associated symbol.