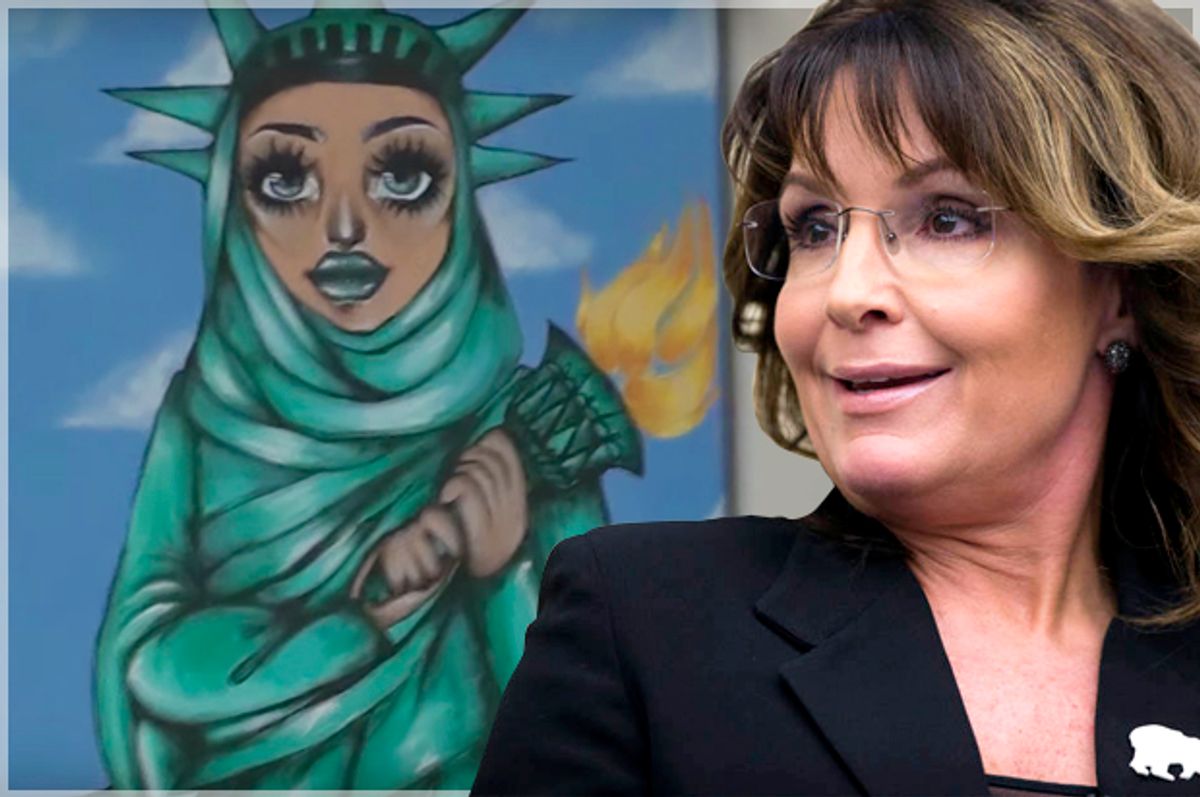 A congressional art competition appears to be shaping up as a favored battleground in the conservative culture wars, as for the second year in a row right-wing activists have become fixated on a specific piece of art created by a high school student.

It won fourth place in Rep. Lou Correa’s district in the annual House of Representatives Artistic Discovery Contest for high school artists. But the painting has elicited outrage from an activist group called We the People Rising, who are now demanding that Correa take it down.

The group claims that the painting of the Statue of Liberty should be taken down on the basis of the separation of church and state. We The People Rising has denied their complaints have anything to do with an anti-Muslim sentiment. The group met with a staffer from Correa’s district office in Santa Ana about a month ago to discuss their concerns.

“You guys have a picture out in front of your office with a Statue of Liberty wearing a hijab, which I find reprehensible and disrespectful,” one group member tells the staffer at one point in a video of the meeting posted to YouTube.

“When you put the Muslim–you know, hijab–on the Statue of Liberty, that implies that we welcome Syrian refugees and all that,” another man explained to the staffer.

“It’s a bad example for our congressman,” Mike McGetrick, an activist with the group, told the Orange County Register. He added that he "would like to see our Congress people be right-down-the-line patriotic.”

On Monday, Sarah Palin contributed to the conservative firestorm by sharing a post from the Young Conservatives website criticizing the painting, with her 1.5 million Twitter followers.

Complaints to the Congressional Rep’s office have recently multiplied as right-wing media outlets have picked up on the outrage. Correa’s office is withholding the student’s name and school “citing unspecified threats” and “a request by the police not to release information that could jeopardize the artist’s safety,” the Register reported.

The Register says that the group – unhappy that the painting is still hanging in the congressman’s office – is considering scheduling a protest on September 11.

But as the Register reported, the congressman “sees nothing objectionable in the painting.” Correa told the Register that he had run the art past the Office of the Legislative Counsel and no legal issues exist with displaying the art. The Democrat told the group members to bring him “a legal opinion that shows me it’s not allowed."

“You take it in the context of a lady, probably a Muslim American — with all that’s going on, she’s a proud American,” Correa told the Register. “That’s what it says to me.”