Trump wants to take credit for the strong economy: Like everything else he does, it's likely to backfire

President showers self with praise, as usual. Does that mean he'll take the blame when it all goes badly south? 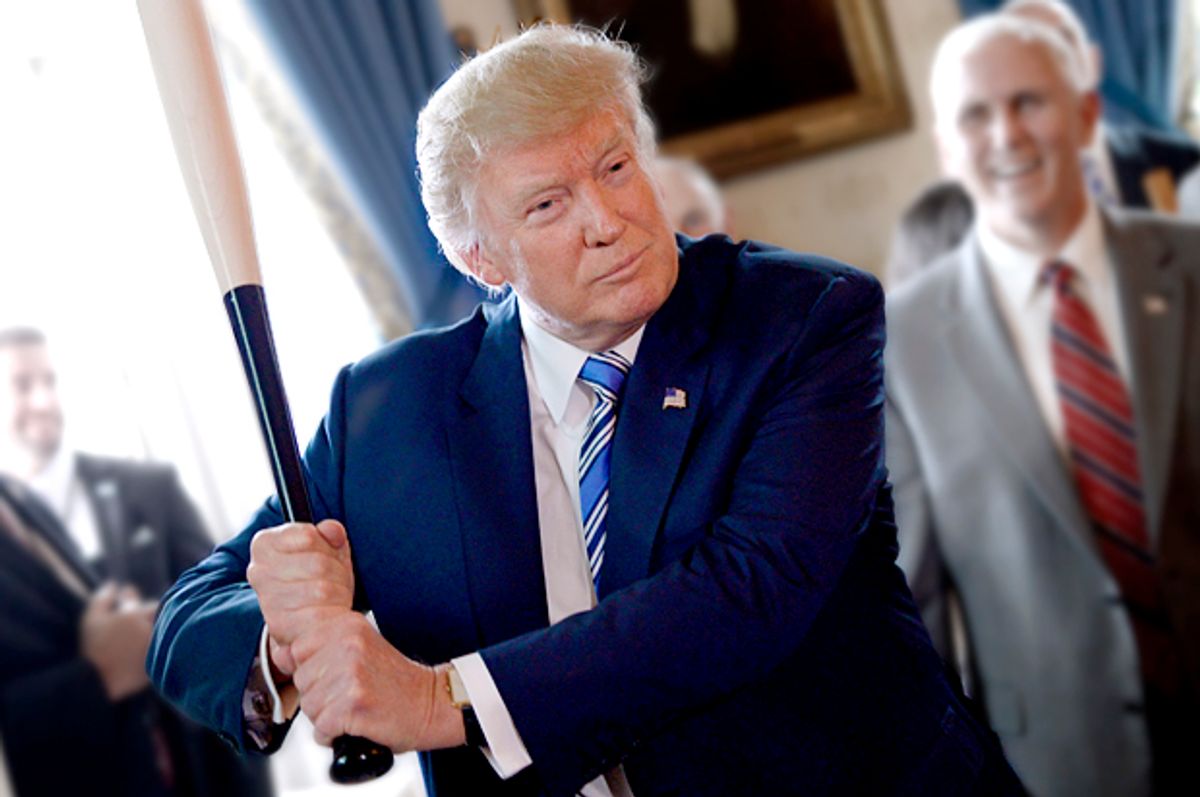 In a desperate attempt to fluff Donald Trump's base and shield him from rising calls for impeachment, the White House has launched a campaign to ballyhoo an admittedly robust economy. It might literally be the only thing keeping the president’s head above the surface-tension of an increasingly suffocating and self-manufactured quicksand pit. Deep down he probably knows it. As long as the leading economic indicators show a decent level of growth with low unemployment and a Dow that’s above 20,000, Trump’s presidency will remain buoyant.

The politics of this strategy are simplistic, misleading and nearsighted. But, for now, it’s all he’s got.

The act of seizing ownership of a strong economy this early in an administration is a impulsive and risky proposition, which is why it seldom happens. Not this soon. When the economy begins to backslide, as it inevitably will due to Trump’s harrowingly destabilizing presidency, he’ll have nowhere to hide. Since he’s claiming ownership of the economy from here on out, he’ll be the first person we blame when there’s an economic downturn. In other words, Trump knows nothing, and if he and his political advisers knew what the hell they were doing, they’d be more cautious about inextricably linking the president to such a mercurial collection of indicators.

Sure, Trump will never take the blame with the same level of celebratory gusto with which he’s taking credit for the better times. It’ll be someone else’s fault, he’ll say. Probably Barack Obama’s. And, of course, none of his cult followers or rally-porn addicts will blame him. Trump’s grievance movement will never accept personal responsibility for a damn thing, especially a (hopefully mild) recession. But swing voters will. Anyone with even a basic grasp of rationality, fairness and logic will point to Trump’s incompetence and his horrendous stewardship of the economy as the primary drivers of potential economic danger. Again, if he’s allowed to accept credit for a strong economy, it only makes sense to hold him accountable when it ceases to be strong.

Adding to the foolishness of Trump’s economic gambit, the health of the economy can hardly be credited to his actions, given that his presidency is so new and that he hasn’t really done anything for the economy other than a series of executive orders that can’t possibly be traced to the addition of a million new jobs. Sending coal country workers back into the choking blackness of the mines -- mines that are increasingly being deregulated thanks to Trump, by the way -- hasn’t helped the national employment outlook.

Nor will his micromanagement of a few factories, claiming to have rescued Boeing and Carrier jobs that ended up being downsized anyway. Boeing announced a series of layoffs just five months after Trump visited its North Carolina Dreamliner factory to scream about his “Hire American” effort. As for Carrier, employees are raging mad at Trump after they were laid off despite his highly publicized claim that he singlehandedly rescued their jobs. The Carrier situation is a fantastic example of what we’re talking about here. When you claim credit for good news, you’ll be the one they blame when the good news vanishes.

Despite Trump’s claim to the contrary, the condition of the economy can be directly correlated to growth that occurred prior to his inauguration. Put another way, what we’re experiencing now is merely a continuation of what happened before. Granted, nothing major has happened since inauguration day to significantly interrupt this trajectory, but to repeat, it’s still way too early. For example: here’s the Bureau of Labor Statistics’ unemployment chart. (Fox News and Trump himself have been using the BLS’s current numbers, so no -- it’s not fake news.) Much the same phenomenon can be illustrated in the context of stock market growth.

Speaking of which, remember when Trump used to shriek to his rally audiences about the so-called “real” unemployment rate? Once he claimed the actual unemployment rate was “20 percent . . . 30, 32 . . . 42 percent.” It's interesting how this particular lie evolved out loud and in real time. Now that he’s president, the stat doesn’t seem to exist any more. Funny how that works. It was never an accurate measure of actual unemployment in the first place, since the “real” rate includes retirees, students and disabled citizens. Nevertheless, Trump seems to love the fact that last month’s unemployment rate continued to hover at around 4.3 percent (he retweeted this), even though previous unemployment figures that were calculated using the same methodology were “fake news.”

Ultimately, Trump is once again setting himself up for a political cataclysm. He continues to tread water in “the eternal now” -- blurting things that will only get him into trouble later. The growth that occurred during the Obama years won’t last forever, even though many of us who barely survived the Great Recession wish it would.

When that winning streak ends -- a winning streak he’s currently vouching for -- Trump (if he’s still president) will have to account for what happened. More importantly, he’ll have to answer for why he didn’t do enough to prevent the decline. At that point, you’ll also see the Trump Republican Party suddenly embrace previously demonized socialistic things like stimulus spending and the like. At the same time, without the economy as a selling point, the GOP will also take a harder look at the prospect of impeachment. Indeed, Trump should maybe show a little gratitude for the fact that the economy is helping to shield him from being removed from office. Maybe a grateful tweet is in order. “Thanks, Obama,” will suffice.