Reflections on the "Dangerous Delusions of Richard Dawkins" 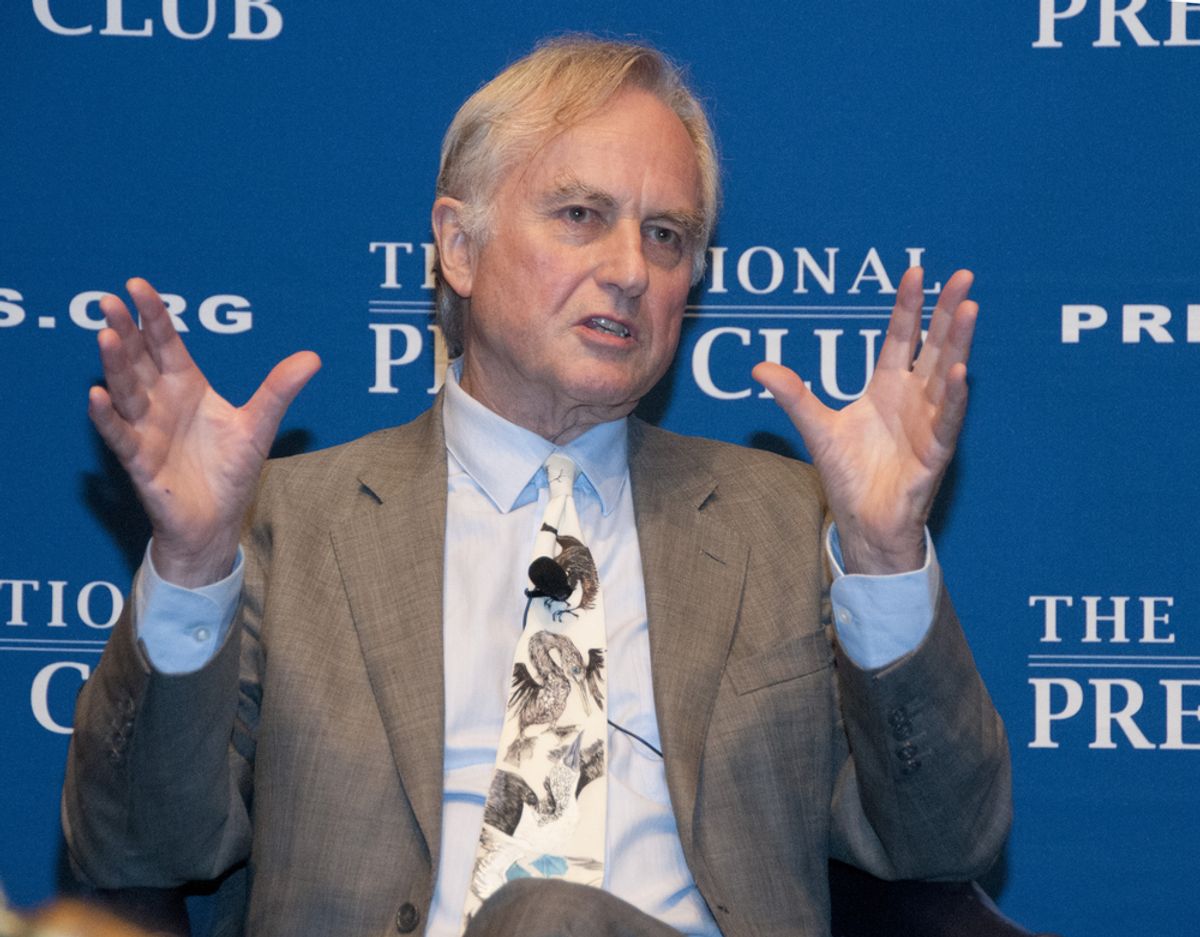 My article "The Dangerous Delusions of Richard Dawkins," which appeared on AlterNet recently, has stirred up a veritable hornet’s nest of controversy. Within a few hours of publication, it has catalyzed over 350 comments, most of them antagonistic. To give a sense of the flavor and tone, here’s a typical entry:

Yep. This piece isn't just fallacious, it is flagrantly intellectually dishonest. The only way for AlterNet to save face on this is to retract this tripe in its entirety.

I should have been prepared. In a recent article on Salon, Phil Torres writes how the New Atheist movement has degenerated into a tribal ethic of intolerance. His piece initiated its own torrent of comments, such as, “That's the stupidest thing I've ever read.”

However, along with the vitriol, some arguments made in response to my article raise important issues worthy of a considered response. In the hope of catalyzing a more productive dialogue, I’ve attempted to distill what I see as the key criticisms and offer my feedback. I encourage a continuing discussion, in a civil and respectful tone, of what I see as vitally important topics regarding the underlying structures of thought that predominate in our civilization.

"Attacking the 'Selfish Gene' idea is a straw man tactic"

This is probably the most significant recurring critique of my article. I am accused of being disingenuous by attacking the “selfish gene” phrase, whereas Dawkins’ actual arguments are far more sophisticated and thoughtful than the book’s title would imply. Several readers refer to the 30th anniversary edition of "The Selfish Gene," where in a new preface, Dawkins complains of simplistic attacks by “those philosophers who prefer to read a book by title only, omitting the rather extensive footnote which is the book itself.”

In fact, this was the very edition of "The Selfish Gene" I read many years ago, at the outset of the research project that generated my book "The Patterning Instinct." I’m afraid that if you read the “extensive footnote” of the book, you will see that Dawkins expands with literary flourish on the broader implications of his “selfish” theme:

The argument of this book is that we, and all other animals, are machines created by our genes. Like successful Chicago gangsters, our genes have survived, in some cases for millions of years, in a highly competitive world. This entitles us to expect certain qualities in our genes. I shall argue that a predominant quality to be expected in a successful gene is ruthless selfishness. This gene selfishness will usually give rise to selfishness in individual behavior…. Much as we might wish to believe otherwise, universal love and the welfare of the species as a whole are concepts that simply do not make evolutionary sense.

While Dawkins has to some extent disavowed his book’s title, I haven’t seen him disavow his book’s core argument.

Dawkins does state clearly that his description of the gene’s selfishness in no way justifies a moral code of selfishness. “Be warned,” he writes, “that if you wish, as I do, to build a society towards a common good, you can expect little help from biological nature.” Rather, Dawkins sees humans as being in a state of constant battle with their own genetic makeup. “Our brains,” he suggests, “have evolved to the point where we are capable of rebelling against our selfish genes.”

Thus, Dawkins proffers the image of a human as a battleground between the “state of nature” (our selfish genes) and our moral conscience. As I describe in "The Patterning Instinct," this split vision of a human being can be traced back to Plato’s original dualistic construction of reason fighting bodily impulses, which became a founding precept of Christianity, as manifested in Paul’s narrative of his soul engaged in a struggle to the death with his body. It is ironic that Dawkins, an outspoken critic of Christianity, should have inherited this split conception of the human being from the very tradition he so vehemently opposes.

This view of the human condition is so widely accepted in Western thought that it might strike many as self-evident. However, it’s a viewpoint unique to the European tradition. Other cultures have seen humanity’s propensity to cooperate as intrinsic to human nature, something that has been validated by recent findings in cognitive anthropology.

A related criticism is that Dawkins didn’t mean genes are literally selfish (which of course is an absurdity), but was merely using it as a metaphor. Dawkins, once again, makes this argument himself in his preface to the 30th anniversary edition. However, metaphors have a deeply powerful influence in structuring how we think. The core metaphors of the cosmos held by various cultures have been instrumental in shaping the direction of history; they hide in plain sight within our cognition, becoming so entrenched in our thinking that we forget they are metaphors and begin to believe them as fact, along with the logical entailments that arise from them. In the words of cognitive linguist George Lakoff, “Metaphorical concepts… structure our present reality. New metaphors have the power to create a new reality.”

To see how this actually happens, we need look no further than the case of Enron, one of the grisliest examples of an unfettered capitalist ethos gone wild. Enron CEO Jeffrey Skilling famously based his managerial philosophy of Darwinian survival on "The Selfish Gene," his favorite book. Dawkins has disavowed Skilling’s flawed interpretation of his work, but the fact remains that millions of people throughout the world continue to believe in this myth of the “selfish gene” as a harsh but inevitable truth of nature. The core metaphors we use to think about ourselves and the universe have profound implications.

In the words of one commenter, “Dawkins is a scientist, and would change his views if evidence were presented to really refute them. In respect of 'The Selfish Gene' no such evidence has been presented.”

As a cultural historian, not a scientist by training, I can only point to the work of countless biologists who have extended our understanding of evolution in recent decades to a far more sophisticated level than seeing the “gene” as the single unit of selection. New theories of multilevel selection and niche construction, studies of epigenetic inheritance, and the recognition that the word “gene” itself has no rigorous and consistent definition, all need to be fully incorporated into any systematic understanding of how nature and evolution actually work.

For those interested in pursuing this investigation further, I refer you to a sampling of my own research on this topic with some of the clearest expositions from recognized leaders in the field of evolutionary biology (see the footnote at the bottom of the page).

I appreciate that Richard Dawkins himself is no proponent of modern laissez-faire corporate capitalism. I believe Dawkins is a highly ethical man with good intentions, and my critique of his ideas should not be taken in any way as ad hominem. I agree with much of his criticism of monotheistic beliefs (a chapter of my book chronicles what I call the “scourge of monotheistic intolerance”), and I wholeheartedly support his defense of science against climate denialism.

The problem is that, regardless of his intentions, the two core metaphors he has been so successful in propagating—the “selfish gene” and “nature as a machine”—have been widely accepted as reality in our society, with devastating consequences on both human relations and the natural world. My intention in writing this article (and my book) has been to draw attention to the implicit assumptions underlying our worldview that encourage us to think and behave collectively in destructive ways. It is only by becoming conscious of our own preconceptions that we can shift our cognition toward patterns that can be more beneficial for ourselves and the world at large.

A number of comments are strangely vitriolic about my assessment of findings in systems sciences, such as complexity theory and systems biology that emphasize the importance of connectivity. There seems to be an underlying widely held belief that any non-reductionist view of reality must be woolly headed New Age nonsense. One commenter calls it a “hippy-dippy notion of an inter-cooperative cosmos” and another as “vacuous, feel-good New Age-y Kumbaya bullshit.”

These responses are sad and somewhat mystifying. There are countless peer-reviewed journals dedicated to disseminating findings in systems-related disciplines. Some of the greatest scientists and mathematicians of the modern age—Ilya Prigogine, Erwin Schrödinger, Edward Lorenz, and Benoit Mandelbrot, to name just a few—have devoted distinguished careers to developing a better understanding of how complex systems work. For anyone interested in learning more about this important alternative to the reductionist view of the universe, and its potential implications for future human flourishing, I refer you to this page on my website.

As I state in my article, I believe Dawkins and his followers are responsible for presenting a false choice to thinking people everywhere: that to reject monotheistic superstition they have to believe in reductionism. The recognition that there are underlying principles that apply to all living things, and that humans and nature are interdependent, offers a framework for making sense of humanity’s place in the universe that is intrinsically meaningful. I invite those who reflexively dismiss these ideas as “New Age nonsense” to study the rigorous science underlying them, and enter into a respectful, generative dialogue into their deep philosophical and social implications.

Jeremy Lent is an author and speaker whose work investigates the underlying causes of our civilization’s existential crisis, and explores pathways toward a life-affirming future. His recently published book is The Web of Meaning: Integrating Science and Traditional Wisdom to Find Our Place in the Universe. Find his website at jeremylent.com.