Saudi Arabia is buying off and silencing its critics

Shutting down Al-Jazeera Arabic is just one part 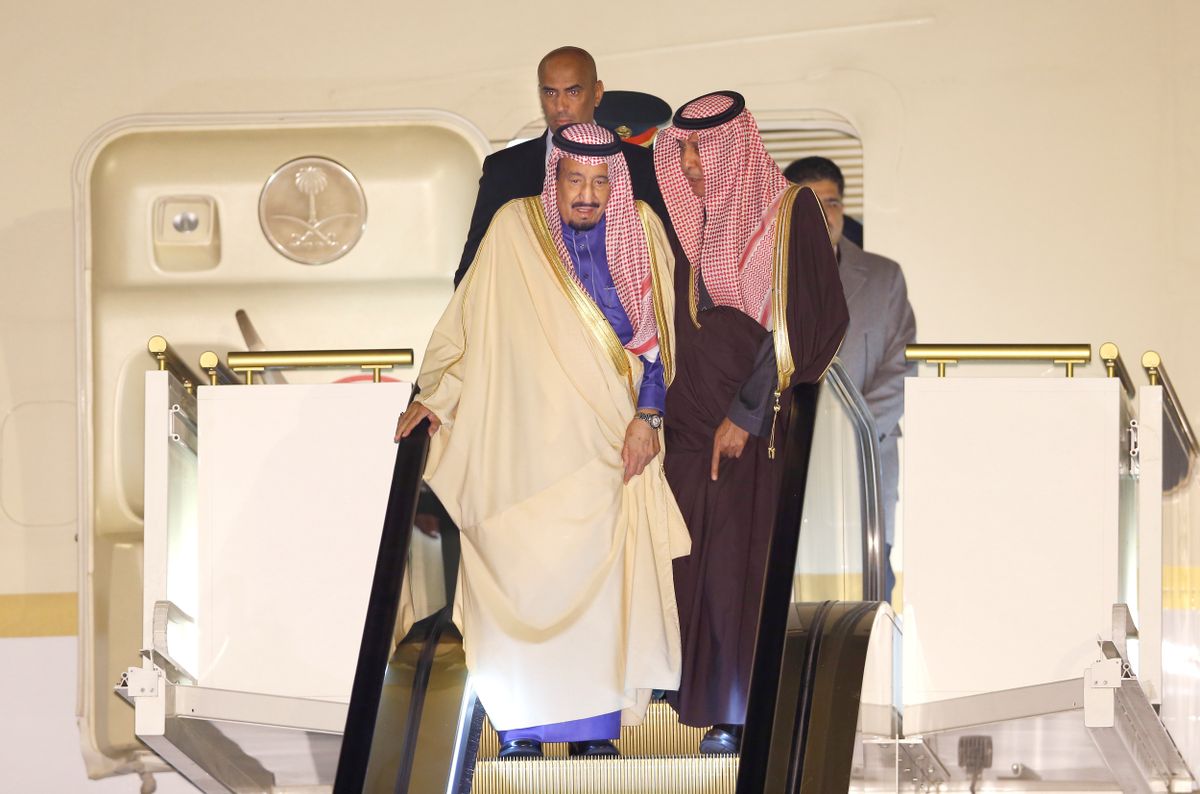 Saudi King Salman, left, rides on a special escalator to disembark from his plane upon his arrival at Haneda International Airport in Tokyo, Sunday, March 12, 2017. (AP Photo/Shizuo Kambayashi)
--

This article originally appeared in Truthout.

The existence of Al Jazeera continues to pose a formidable problem for the Persian Gulf state monarchies. This reality was starkly revealed during the recent blockade in which Saudi Arabia and the United Arab Emirates closed off food and medicine shipments to Qatar, accusing it of supporting terrorism by funding and hosting Al Jazeera Arabic. The suppression was supposed to be carried out quietly, but Qatar's protests revealed a disturbing game plan.

With its independent editorial voice, Al Jazeera (a media outlet where I have contributed articles) is the only major media outlet in the Gulf state region committed to watching and reporting on atrocities, and the persistent threats to human rights and democratic freedom of expression. Al Jazeera has stepped in when others — including the US and Europe — have remained silent. In exchange for silence, American and European interests have preserved and extended lucrative relationships in business as well as defense contracts.

If you are following the global mainstream media coverage of the Saudi-led war in Yemen, you will have noticed the looming silence about the war there, as compared to the frequent coverage of the war in Syria. In Yemen, thousands are dying from Saudi bombardments, starvation and the biggest cholera outbreak in the world. In one report, Yemeni prisoners said they had been crammed into shipping containers smeared with feces, blindfolded for weeks, sexually assaulted and beaten by the United Arab Emirates, Saudi Arabia's main ally. One torture method, known as the "grill," had victims tied to a spit like a roast and spun in a circle of fire. Al Jazeera has been the only major media outlet in the region reporting about Yemen, so shutting it down could enable the Saudis and their Emirati friends to upgrade their atrocities to genocide.

There has been an additional cost for American and European interests. The Gulf petrodollar has strengthened, emboldening the acquiescence of US and European politicians, media and think tanks. Most Western universities and policy institutes receive impressively generous funding from the Gulf monarchies and, in exchange, the tone of academic discourse constrains the focus on human rights abuses and attempts to accommodate the Gulf state rulers from a pragmatic point of business relationships and global commerce.

Linked to this is the ever-manifest presence of law firms and lobbying groups in Washington, DC, especially from Saudi Arabia, that have influenced US policy and public opinion. Numerous entities have benefited from Gulf state donations, including the Middle East Policy Council, the Middle East Institute and the Smithsonian Freer Museum of Art, just to name a small handful.

As disturbing as this should be, partnerships between Saudi Arabia and international organizations empowered to protect human rights are even more worrisome.

Last month, Saudi Arabia won a seat on the governing body of the International Labor Organization (ILO) at the annual conference in Geneva. It will now be involved in setting the ILO policies, budget and program activities, and its presence could silence ILO critics who have called out Gulf states for widespread migrant worker abuses.

The Saudi kingdom, which just won a third term on the UN Human Rights Council, has also been elected to the United Nations' Commission on the Status of Women — a peculiar step, given the kingdom's less than egalitarian stance on rights and social privileges for women.

The Trump administration, meanwhile, appears to be trying to appease cash-rich Arab dictators while aggressively proselytizing about a human rights agenda to leaders of poorer nation-states. The message to human rights victims who happen to be in oil-rich states is to patiently endure the abuses until the inevitable time when these countries run out of oil and must reconfigure their economies. For now, the US and Europe side with the rich dictators. The West has ensconced itself in an alliance that is a profound betrayal of conscience, values and historical roots.

Trump has articulated a message that unsettles human rights activists in the region. Throughout the 2016 presidential campaign, Trump blasted Hillary Clinton for taking money from Saudi Arabia, which, as he regularly noted, has a horrific human rights record and was behind the attack on September 11. However, as president, Trump visited Saudi Arabia, meeting all Gulf rulers during his first formal state visit. Effusively praising his hosts, Trump negotiated a $110 billion arms deal with Saudi Arabia. The deal does not include any contingencies or conditions seeking to take human rights guarantees into consideration. Rather, the deal is essentially a carte blanche gift to a nation with one of the worst records in atrocities that violate the sanctity of human rights.

So if governments, politicians, academic institutions, media and even non-governmental organizations are unable or unwilling to heed the voices of desperate people seeking to live with dignity and human rights in the Gulf states, then the question becomes, "Who will?" It is a vulnerable time for democracy and human rights in the region: The petrodollar appears to be corrupting everyone into silent accommodation. Preserving the status quo on a slim surface is apparently the only meaningful objective for many, regrettably.

Individual human rights activists, meanwhile, have suffered increasingly dire consequences for speaking up. Many activists in Saudi Arabia, Bahrain and the United Arab Emirates have endured prolonged detentions with torture while others have been deported abruptly, cut off from their livelihoods and from their families.

The United Arab Emirates recently arrested Ahmed Mansour, reportedly the only human rights activist who was moving freely about the country. Ahmed has described himself as "the last man talking" in the United Arab Emirates and the region about human rights violations, as almost every other activist in the Gulf state countries is in jail, exile or has been silenced by the fear of what the authorities will do not only to him or her, but also to loved ones. Dr. Naser bin Ghaith, a distinguished economist, already has served a lengthy prison term.

For my work as a journalist and author who chronicled the extensive abuses and exploitation of migrant workers, I was terminated and deported from the United Arab Emirates. And after being outspoken against the sheikhs, I have found countless doors closed to me in both media and academic institutions, many of which are supported financially by the United Arab Emirates and other Gulf State interests.

The world should be asking, "What will happen to billions of innocent people who work hard to achieve a modicum of comfort and economic welfare when the last independent person of social conscience stops talking?" There is still time to reverse this ominous trend.