“Twin Peaks: The Return” makes tragedy out of sequels

The town of Twin Peaks has become a depressing place 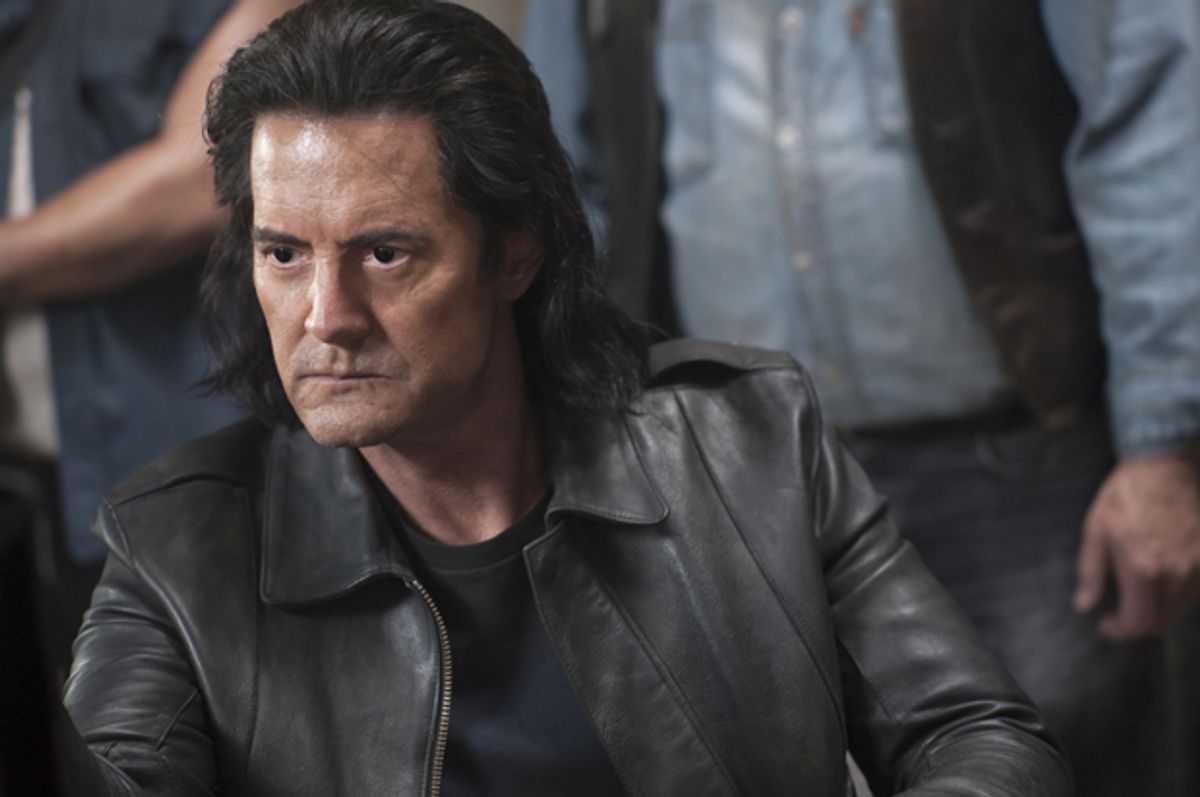 After the original run of “Twin Peaks” ended in 1991, it felt to many fans like the show would never return. Now it feels like the show might never end. Sunday’s episode was the 13th of 18. It could’ve been the 13th of 100. David Lynch has provided plot like an inattentive gardener provides water: in infrequent bursts.

The shower in Sunday’s episode comes when Mr. C, the evil Cooper, tracks down Ray to obtain the coordinates he needs. He also obtains information about Phillip Jeffries. Jeffries, Ray tells Mr. C, hired Ray to kill Mr. C, which Ray did unsuccessfully in Episode 8. Ray’s mistake was not heeding the second part of Jeffries’ command: He failed to put a green ring he was given — the same one that Laura Palmer wore to prevent Bob from possessing her — on Mr. C’s finger after the job was done. Mr. C makes Ray put the ring on Ray’s own finger, and after Ray tells Mr. C the last bit of information he needs (that the last he heard Jeffries was at The Dutchman’s), Mr. C kills Ray, and Ray’s body and the ring appear in the Black Lodge.

That sequence, which follows an arm wrestling bout between Mr. C and Ray’s Mr. Clean-look-alike boss, takes place in about the time that Lynch’s camera spends lingering on Sarah Palmer in her living room, drinking and watching a boxing clip that seems to be on a continuous loop. Or the time that his camera spends on James Hurley, at the roadhouse, singing “Just You,” the love song that he, Maddy Ferguson and Donna Hayward recorded early in Season 2. Or the time that his camera spends on Ed Hurley, in his office one night, eating soup from the Double R Diner and lighting a small piece of paper on fire and watching it burn to nothing.

When “Twin Peaks” has returned to Twin Peaks, the show has been more tragicomedy than mystery. Lynch has treated fan service and the premise of a sequel subversively. If fans want to see what old beloved characters are up to, Lynch will show that — but he’ll do so in all its squalid mundanity.

Most characters from the original show have stayed in Twin Peaks and have not changed much. As a result, they have regressed. In Sunday’s episode, Norma Jennings is visited at the Double R by a new business partner and romantic interest named Walter Lawford (Grant Goodeve). We learn that the Double R has become a small franchise and that three of the five restaurants are making a profit. The original store, though, is one of the two Double Rs that isn’t making a profit. Walter wants Noma to change the name of the diner to “Norma’s Double R” because the name tests better in market research. “In Twin Peaks, it’s been the Double R for 50 years,” Norma replies. “That’s what people want.”

It’s certainly what fans want. The prospect of change in Twin Peaks is unsettling. But when Lynch is not poking about in other dimensions he is showing that the alternative to change is worse than unsettling: it is depressing. When James sings “Just You,” each note carries the weight of time. His bushy hair is buzzed, his face has wrinkles, and the other two parts of the trio are gone. James is alone, divorced from his youth. The song was always sad, but 25 years later, it’s sad in a different way. It was about someone who’s suffered a great loss. Now it’s about someone who can’t move on. The performance almost makes you wish the curtain was never lifted. Almost.