Affirmative-action hypocrisy: Foes hope to use Asian-Americans to attack racial diversity on campus

Jeff Sessions' DOJ now says it will investigate discrimination against Asian-Americans. That's not the real goal 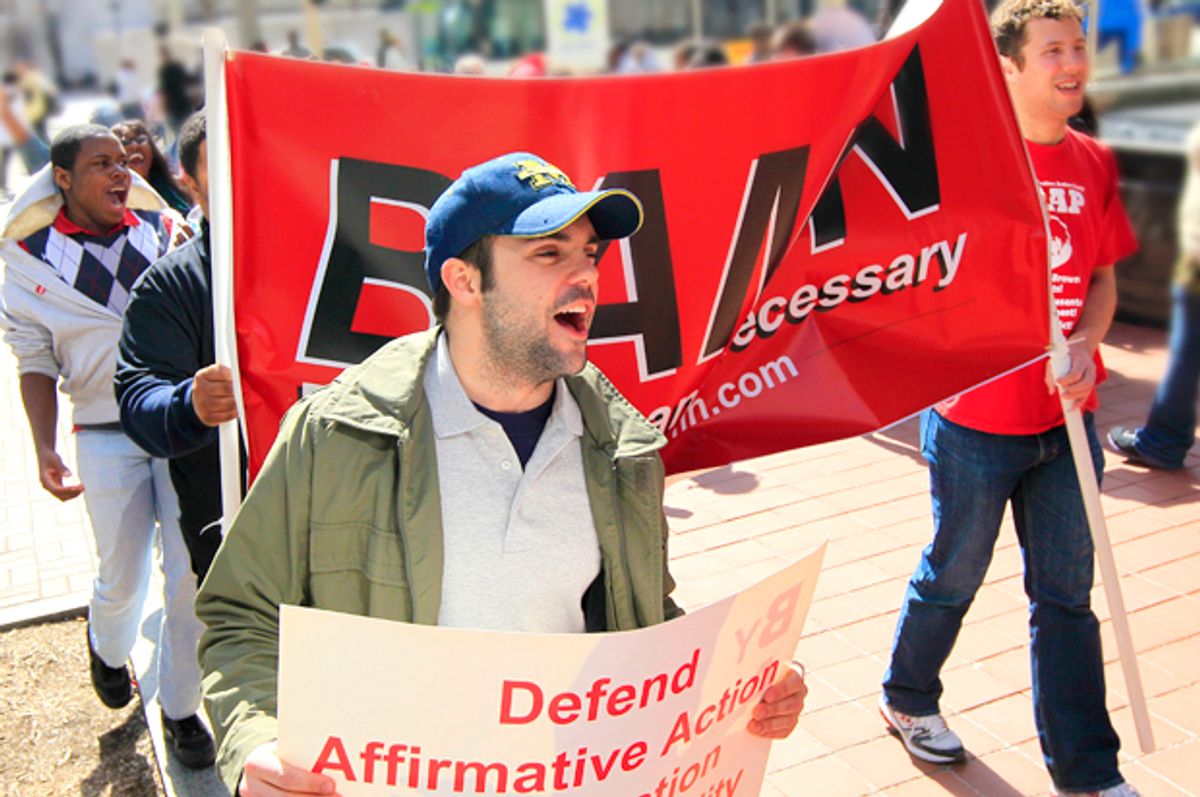 Last week, building on its apparent philosophy of setting policy based on whatever Reddit trolls are ranting about, the Trump administration floated the idea of redirecting resources in the Justice Department's civil rights division away from real instances of racial injustice and toward imaginary slights against white students who believe black and Latino students are using affirmative action policies to steal admissions letters they feel belong to them.

As is common with the Trump administration, the  proposal was, intentionally or not, beta-tested on the public through a "leak." After the ensuing blowback, the Jeff Sessions-led DOJ shifted gears, instead claiming that the real investigation will be about whether Asian-American students are the ones facing discrimination.

It's a clever move that allows the administration to pretend its interest lies with protecting racial minorities. But as Rachel Kleinman, senior counsel at the NAACP Legal Defense Fund, put it, "The issue here, again, is preserving white privilege. They are definitely, in recent years, trying to use Asian groups and Asian individuals as a sort of wedge minority, to pit them against black and brown students, and argue, ‘You’re losing out because of affirmative action,'" she continued. "But that is really not what is going on."

“Elevating the question of what’s happening with Asian students is a not-so-veiled cover" for a larger campaign "to decrease diversity on campuses," agreed Fatima Goss Graves, head of the National Women's Law Center.

Part of what's going on here is that the longtime conservative argument that black and Latino students are stealing seats from more deserving white students has failed spectacularly in the courts. Last summer, a woman named Abigail Fisher lost her lengthy court battle against the University of Texas at Austin, when the Supreme Court ruled that she was not unfairly barred from admissions on the account of being white.

It's telling that Fisher was the best that her patron, an anti-civil rights activist named Edward Blum, could do in digging up a white plaintiff with some halfway plausible claim of discrimination. The problem was that Fisher was a mediocre student who simply didn't have the scores to get into Texas. It's true that the school let in 47 students with lower scores than Fisher, arguing that these students had résumés that made up for their lower scores in other areas -- but 42 of those students were white. Fisher could never really explain why the 42 white students were fine, but one of the five nonwhite students admitted was somehow taking her seat.

"There are known and meaningful reasons for schools to think broadly about the range of students that are going to add value to their campus," Graves said, citing research that shows diverse student bodies improve the educational experience for all students, regardless of race.

Claiming that whites are being booted from their rightful place by supposedly less deserving black and brown people is a failed argument, which is why right-wing activists are regrouping and seeking to use Asian-American admission as a stalking horse to continue challenging the admissions of Latino and black students. The same Edward Blum who backed Abigail Fisher's case popped up in The Washington Post on Tuesday, making the same arguments he made about Fisher, but this time substituting Asian-American students for the whites he also believes face discrimination.

Asian-American advocacy groups are generally not too keen on being used as a wedge to push the idea that other students of color didn't earn their college admissions. Asian Americans Advancing Justice put out a press release noting that the group "opposes quotas for and discrimination against Asian Americans" but that affirmative action policies "which allow admissions officers to evaluate applicants holistically" are conceptually "separate and distinct."

Tuesday evening, a group of Asian-American activists held a town hall on Twitter under the hashtag #NotYourWedge, in which they educated readers about the history and methods of pitting racial minorities against each other so as to weaken challenges against white domination.

"Old trick," Mari Matsuda, a law professor and critical race theorist at the University of Hawaii at Manoa wrote. "They try to set up every generation of Asians against Black/Brown neighbors. Resist!"

As the Fisher case demonstrated, there's good reason to be skeptical that conservative activists can find a legitimate case of a black or Latino student getting an unearned advantage. Affirmative action allows schools to take race into consideration as one factor when trying to decide between similarly qualified candidates — the unqualified student who gets a boost because they're black or Latino is a figment of the right-wing imagination, borne out of a larger inability of racists to imagine that applicants could ever truly meet the academic requirements of elite colleges and universities.

Still, there are reasons to worry about the DOJ's hunting expedition, even if they are unlikely to find the mythical undeserving black or brown student.

"What it really tells me is that they are trying to intimidate schools," Graves said. "They are trying to tell schools that we will go after you and make you spend resources on defending your program if you try to do things to achieve a more diverse student body."

"When you hear that suddenly the federal government, despite what the court has said, is going to start investigating admissions policies as potentially intentional discrimination," Kleinman agreed, "that’s going to chill what people are willing to do, what universities are willing to do."