It's tough to resist the politics of "us versus them." But science suggests we can rewire our brains for pragmatism 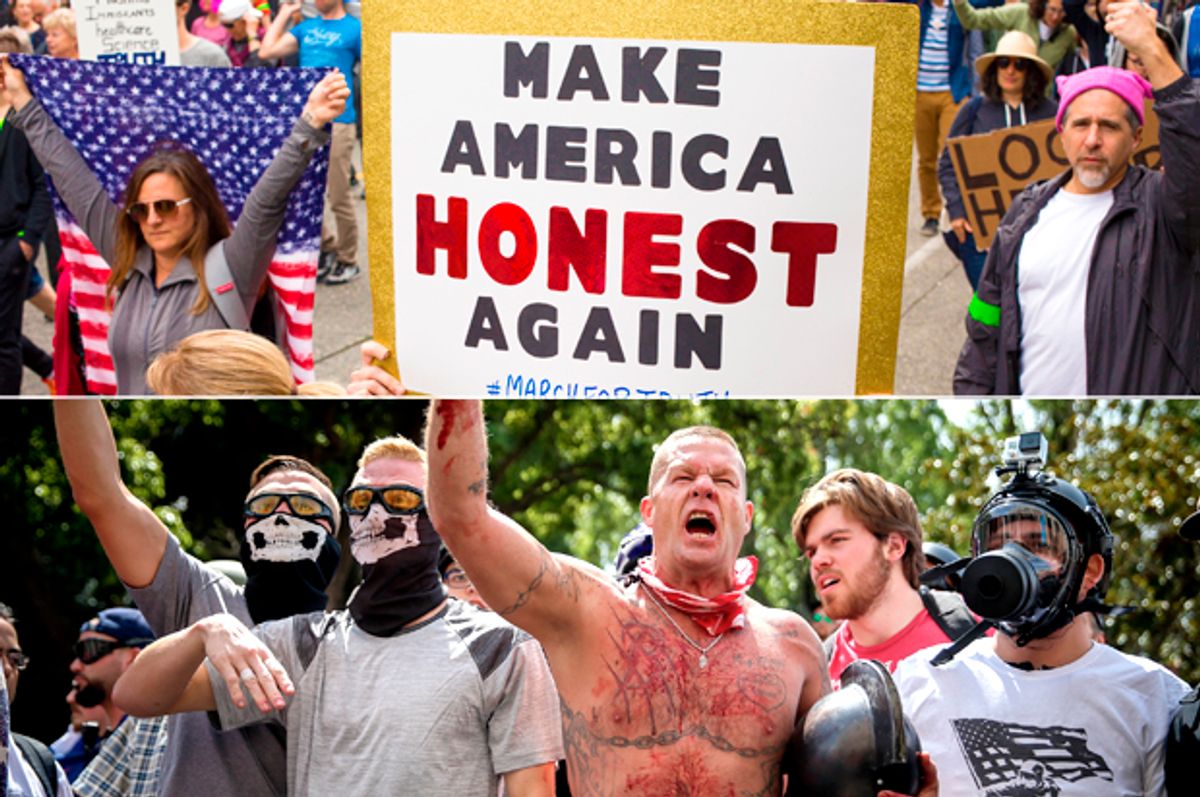 The rancor of the Trump era wages on, unabated. Toxic politics between President Donald Trump and a wide range of opponents – both inside and outside his party – all but paralyzes the organs of policy-making. While unseemly to most, the real threat is that this bitterness prevents the nation from addressing the difficult challenges it faces. The situation is unlikely to improve on its own, since the profound animosities within the system are in part the product of deeply ingrained but efficient ways of thinking. Fortunately, there is a way to reboot.

Conflict is expected in politics, because people and groups have fundamental disagreements about how the world works and what government should do. Even resentment and hostility in U.S. politics have strong precedent. However, in the current era the president has taken on an entrepreneurial role in sowing conflict, and it’s a banner time for acrimony. In the course of just one week, Trump lambasted Attorney General Jeff Sessions, rallied Scouts into booing former President Barack Obama and brought open warfare to the White House with his choice of Anthony Scaramucci as communications director. Trump exacerbates the routine divisions that mark politics, ones difficult enough to resolve, piling on in a way that strengthens the us versus them dynamic, making conflicts virtually intractable.

Neuropsychologist and philosopher Joshua Greene thinks many political conflicts can be explained by tribalism. In “Moral Tribes,” Greene describes in metaphorical language longstanding tribal allegiances with distinctive moral commitments, especially about whether society should be organized around individualism or collectivism. Yet Greene offers more than just jargon for familiar divisions. He provides evidence that tribes originate in instinctive, and even biological, processes.

In an experiment, Greene manipulated the amount of time subjects had to allocate resources – small amounts of money – given options that benefit either collective or individual interests. When forced to allocate quickly, subjects were more likely to cooperate, suggesting that cooperation is intuitive. The bad news is that conflict between groups – tribalism – extends from the same processes that encourage people to cooperate within a group. What’s more, there is ample evidence that people favor the in-group, the group with which they identify, and have negative associations with the out-group. Greene suggests that this is in part biological, with oxytocin, a neural transmitter, contributing to in-group favoritism and out-group antipathy. We are, in fact, wired for tribalism.

The effects of this can be seen in Trump-era phenomena. Consider the extraordinarily negative feelings expressed by partisans toward their opponents. April 2016 Pew data show that approximately 90 percent of partisans have unfavorable or very unfavorable views of other-party. They feel similarly negative when asked about candidates. Measuring affect with a “feeling thermometer” ranging from 0 degrees (coldest) to 100 degrees, Hillary Clinton had a chilly 11 degree average among Republicans, not much different than the 12 degree average Democrats gave Trump. But there’s more: political attitudes bleed over into other non-political areas. Lynn Vavreck’s survey of Americans during the week before the 2016 election found that 60 percent of Democrats wanted their child to marry a Democrat while 63 percent of Republicans preferred a same-party marriage for their child.

Preferring a harmonious marriage for your child might be reasonable, but some attitudes are more complicated. Tribalism can encourage subjugation of self-interest for that of the group, as shown in experiments cited by Greene. Think of the white working class, which has (at least until recently) been strongly supportive of Obamacare repeal, despite being a core beneficiary of the program.

Even more puzzling is the fact that tribalism can be activated and shaped with hardly with any provocation, even by stimuli that have nothing to do with politics. The “minimal group” research of the 1970s in social psychology found that even random, meaningless prompts can catalyze a sense of us versus them. Political scientist Rose McDermott notes that group formation is sometimes as simple as telling people they’re in a group, adding that the in-group creates a wholly positive image of itself, while denigrating the out-group.

McDermott describes experiments that divide people based on, for example, whether they prefer the painters Klee or Kandinsky – or even based on a simple coin toss. Regardless of the dimension on which the group formed, the individuals in them favored their fellow group members. Think about your own experiences as a child on the playground, and the allegiances and disdain that identifying with a team can generate. These in-group/out-group perceptions are not the product of a rational calculation; not much good will accrue to you if your team wins. Nor are they situated in prior antipathy toward the out-group. Indeed, your best friend may be on the other team. But in-group identification and out-group antipathy persist just the same.

Trump is adept at triggering and exacerbating tribalism. His celebrity and behavior, shockingly out of the norm, are as attractive to some as they are abhorrent to others, and he uses them to prompt and perpetuate division. Trump has a masterful control of rhetoric, cultivating strong identities among the public, not as Americans but as members of particularized groups. Ronald Reagan invoked a shared vision of “a shining city on a hill,” but Trump’s rhetoric insults and divides. For instance, in attacking prominent women – Megyn Kelly, Mika Brzezinski – the president signals to those feeling left behind by the societal and economic changes of the recent past that he will pull no punches in fighting for them versus the other.

There’s utility for Trump in the robust identities he cultivates. Supporters are unreceptive to criticism of him, with the upshot that his stature increases. In fact, McDermott reports that leaders who can affirm identification among follows are viewed as charismatic. Some in the president’s out-group, on the other hand, view him increasingly as someone who can defy challenges, coated with Teflon, which produces the debilitating impression that nothing matters anymore.

At first blush, Trump may seem more attuned to the blatant exercise of power than these Machiavellian machinations. He is quick to level threats, to demand adulation, to shove a prime minister out of the way. But his rhetorical approach is also consistent with a sophisticated understanding of the power of division and tribalism. His 5 a.m. tweets may reflect less a lack of self-control than a deliberate move to finely tune his ability to divide.

The mechanics of the president’s exploitation of identity comport with how people process information. Tribalism thrives on what Nobel laureate Daniel Kahneman calls “fast thinking.” Popularized in "Thinking, Fast and Slow," it is representative of a “System 1” approach, which relies on shortcuts or heuristics, rather than rational calculation. Trump’s actions and words seem oriented toward those who think fast. He is consistent, using repetitive language and hammering hard on basic ideas, luring the audience into cognitive ease. A fast-thinking heuristic, cognitive ease holds that simple ideas with straightforward presentations are more likely to be accepted as true. Merely repeating the fake-news mantra that he won the popular vote increases the likelihood that people accept the claim. It’s notable that 49 percent of Trump supporters think that their candidate won the popular vote, in spite of no supporting evidence.

Cognitive ease relates to another of Kahneman’s shortcuts: confirmation bias. Under this, individuals in their fast, labor-saving thinking are predisposed to believe when cognitively engaged or tired. With little energy to process information, people are quick to identify evidence supporting previously-held beliefs and to dismiss evidence to the contrary. Trump’s tendency to bundle controversial ideas in rapid-fire progression – health care, the ban on transgender people in the military, attacks on Sessions, White House personnel changes – increases the likelihood of blind acceptance by his supporters, though leaving his opponents’ heads spinning.

Add to the list of Kahneman’s heuristics the halo effect, the tendency to like -- or dislike – everything. Apropos of this, Trump’s detractors find little of merit in him. The 2016 Pew study of affect – with the 0-100 degree temperatures – showed that a full 82 percent of Democrats placed Trump below 25 degrees; just a slightly lower proportion of Republicans, 76 percent, placed Clinton in that same range.

The fast thinking of Kahneman’s “System 1” is efficient, the source of intuitive judgments that are sometimes accurate, good enough for the task at hand. But it is prone to errors, and the heuristics, though labor-saving, reinforce the same us-versus-them dynamic that marks tribalism. Trump taps into these heuristics, intensifying the intrinsic divisions that Greene describes. This makes for a politics that is not just unpleasant but also unproductive, since no single tribe currently has the numbers to go it alone. Furthermore, it’s unlikely that the tribalism pendulum will simply swing back, because the seeds of reinforcement are sewn into it. Something jarring will have to break its hold on politics.

Greene proposes another solution to disrupt tribalism: Attacking those same cognitive processes that sustain it with “deep pragmatism,” a different way of thinking when people can’t trust their intuition. This is, for Greene, a moral philosophy, a device for enabling cooperation, and he turns to the metaphor of the dual-mode camera to illustrate this. A camera in an automatic, point-and-shoot mode serves us well most of the time. But on occasion a situation calls for an adjustment, recommending the more flexible manual mode. For Greene, the human brain has the equivalent of automatic and manual settings, and his solution for cooperation in the entrenched us-versus-them world, the one where intuition fails, is to activate the manual setting.

In the real world, deep pragmatism requires that people come to a reasoned understanding of current problems and viable – though not perfect – solutions. A concrete first step is to encourage people to run up against what they don’t know. Greene’s studies suggest that while forcing people to justify their own positions may make them more extreme, asking them to confront their ignorance makes them more moderate. Try it out on yourself; explain how insurance exchanges under the Affordable Care Act work. Or how significant voter fraud would conceivably happen in the U.S. system.

For most people to do this thoroughly, without hesitation or the need to cut corners, would be difficult no matter what positions they hold. But the point of this is not to change your position, though that could happen, but to exercise your brain’s manual setting. It’s not just people on the right who needs to do this. It is precisely because the left feels so strongly about the need to resist that it should make sure to engage the manual mode.

The burden is not just on the voters. Party and opinion leaders must bear the costs of this type of moral leadership. They need to model responsible behavior, which is particularly difficult when fanning antagonism toward the out-group is very easy. But the voters can do their part by insisting that public moral debates are about the facts. When there’s not good evidence about what works and what doesn’t work, Greene says that we should acknowledge our ignorance.

This will be difficult, requiring individuals and the system to change. Still, there’s hope in the sense that the depth of the problem is becoming clear. Sen. John McCain, R-Ariz., in recent commentary from the Senate floor, admitted that the chamber’s deliberations “haven’t been overburdened by greatness lately.” Solutions in the spirit of deep pragmatism are percolating elsewhere in the public sphere, on the opinion pages and in nonprofit campaigns. The challenge is formidable, involving nothing short of rewiring both the way we think as individuals and the way the system operates. It is well worth the effort, because the negative consequences of continuing down the path we’re on are significant.

Barbara Trish is a professor and chair of the political science department at Grinnell College.

Eliza Willis is a professor of political science at Grinnell College.