Cynthia Nixon: "A lot of people would like me to run" for governor — Really? Who?

Yes, she's got a good record as a progressive advocate — but is she living in a cosmopolitan bubble? Is the media? 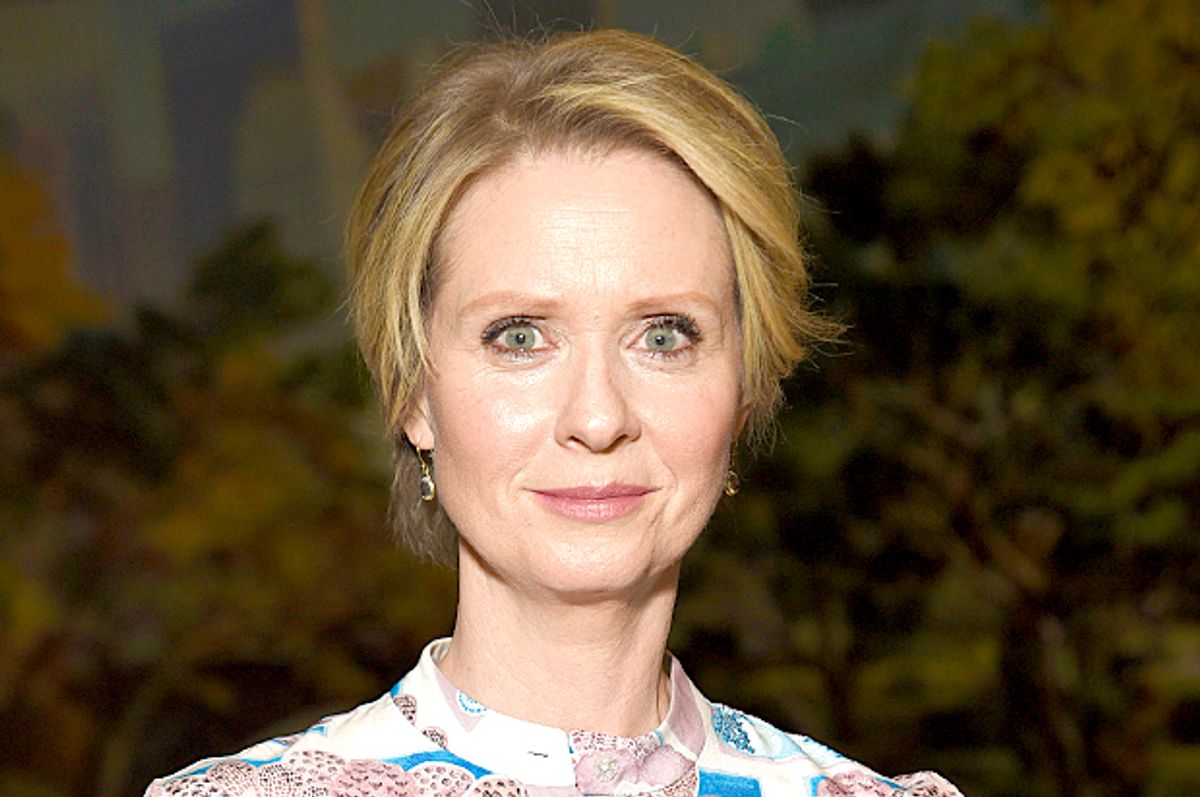 On NBC's "Today" show yesterday, actor, activist and education advocate Cynthia Nixon gave a noncommittal response to the rumors she may be mulling a run for New York governor in 2018.

“I think there are a lot of people who would like me to run, and I think for a variety of reasons,” said the actor who famously played Miranda on "Sex and the City" from 1998 to 2004 and reprised the role in two films. She, however, did not say that she herself was running (something she may have no real interest in). “But I think the number one is education, she said "We’ve got a real problem on our hands in New York state.”

Indeed, we do have educational problems here in New York state despite increased funding to "high-needs" schools and the best efforts of in-the-trenches administrators and teachers in all counties. Some of this is due to the budgetary and educational polices and stalemates coming out of Albany (current Governor Andrew Cuomo and the state legislature preside over a notably dysfunctional and underperforming government and bureaucracy). Some of it is due to failures on the local level.

Whatever the case, Nixon has proven herself a strong and visible advocate of necessary public-school reform, earning both the respect of liberal activists and concerned educators. More than that, there is an off chance that Nixon would indeed make a good governor (with her complete lack of bureaucratic or government experience, she's a completely unknown factor). Certainly, her public image is far better than that of the smarmy, self-serving, proudly ineffective, often uncaring and possibly morally compromised governor the state has at the moment.

When Nixon says that “I think there are a lot of people who would like me to run," exactly who or what is she talking about? Her response is, in some ways, a graceful way to brush off any discussion of the unsubstantiated and possibly irrelevant rumors that she's prepping a run for executive office. Yet, it also smacks of the sort of liberal-bubble thinking that right-wing critics often accuse their counterparts on the left of operating under.

Nixon may be a champion known well to a clutch of education advocates and activists downstate and around Albany — but let's stretch our view out into the exurbs, suburbs and rural towns north of Poughkeepsie and west of the Hudson. New York is a state of almost 20 million people, many of them living in highly depressed areas, many of them conservative. Our legislature — one in which neither party holds full, clear control — is a result of county-by-county, town-by-town splits in allegiances and the timeless battle between the interests and goals of the state and those of the five boroughs (oh, and corruption — lots of corruption).

Her platform of educational reform may appeal to those with liberal leanings — and indeed may help all of our long-suffering citizens — but this state is nowhere near as liberal as many think. Just look at this blood-red map of the 2016 election. Guys with gun racks in Wyoming County may not cotton to a woman who lands far to the left of their current Democratic governor. Women who speak of "illegals" and watch "Fox and Friends" a short drive from Utica may not much care she played Miranda. Many in this state have voted against their own welfare in the Frankian, "What's the Matter with Kansas" mold for generations. It's unlikely a confirmed downstater like Nixon would end that.

Indeed, they may not even know who Nixon is. Her celebrity is leveraged on the backs of a group of predominantly white, affluent, cosmopolitan, liberal and quite often female premium-cable subscribers. Her notoriety is likely circumscribed by the limits of that audience. In the great west and north of the state, she's not probably as much of a factor as many of us in the media would have her be.

New York City residents don't even have to cross a bridge to find those for whom Nixon is a non-factor. Perhaps many of my neighbors in Park Slope know Nixon — but it's unlikely that even half the residents on my surprisingly, wonderfully multi-generational, multiethnic, multinational block do. Nixon may fight for the groups of new Americans, Hispanics and African Americans who make up a large chunk of this city, but it's questionable that a significant percentage of them recognize her when she does.

So who compromises this "lot of people"? Surely, some education advocates and concerned parents of all backgrounds make up a portion of the bulk. But the lion's share of anyone who would think of her as a candidate worth discussing probably reside the tight, liberal bubble a celebrity with her background naturally finds herself in — activists, we in the media, celebrities, toasts of the town, friends, creatives and liberal politicians and bureaucrats. What are we talking about here — a few dozen? A few hundred? They'll be good for raising funds, but do they constitute the voice of the people?

It will be easy for conservatives both in and outside of New York to snipe from the sidelines and say that her candidacy was cooked up over wine and canapés at a Brooklyn Heights book party (though it likely surfaced at a benefit or between meetings at a non-profit). But what Rush Limbaugh, Breitbart or the residents of Batavia have to say about her shouldn't be our concern.

What should be our concern — or is at least mine — is an unproven celebrity's sideways attempt to justify the rumors about her political future by proposing that she has broad support, despite the likely fact that the population she's referencing is highly limited and refined. More than that, it truly speaks to unimaginative, restricted thinking we in the media engage in whenever a celebrity gets anywhere close to activism. Really, none of this is on her — it's on us and we're just as much in the bubble (actually, probably more so) than she is.

Look, Nixon may not even run for governor. That said, she could prove herself a worthy candidate if she contests in the 2018 election and a worthy leader for a troubled state should she win. I'll be there for it if she does.

But if she's going to be effective in either capacity — or even she choses to stay out of government and continue to fight the good fight for public schools — she's got to look outside the bubble that the right-wing accuses us of living in. It's the one thing they're often right about and one of the many things Hillary Clinton never really overcame.

More than that, we in the media are responsible for getting real about these issues and leaving her alone if this isn't what she wants.

If she wants to help New York and if we want to report on her as a viable candidate, both Nixon and those covering her need to plumb the true depth of the state's actual interest in her. After all, if she moves to Albany, she'd have to deal with everyone from the tip of the Battery to Massena in the north and Dunkirk to the west.