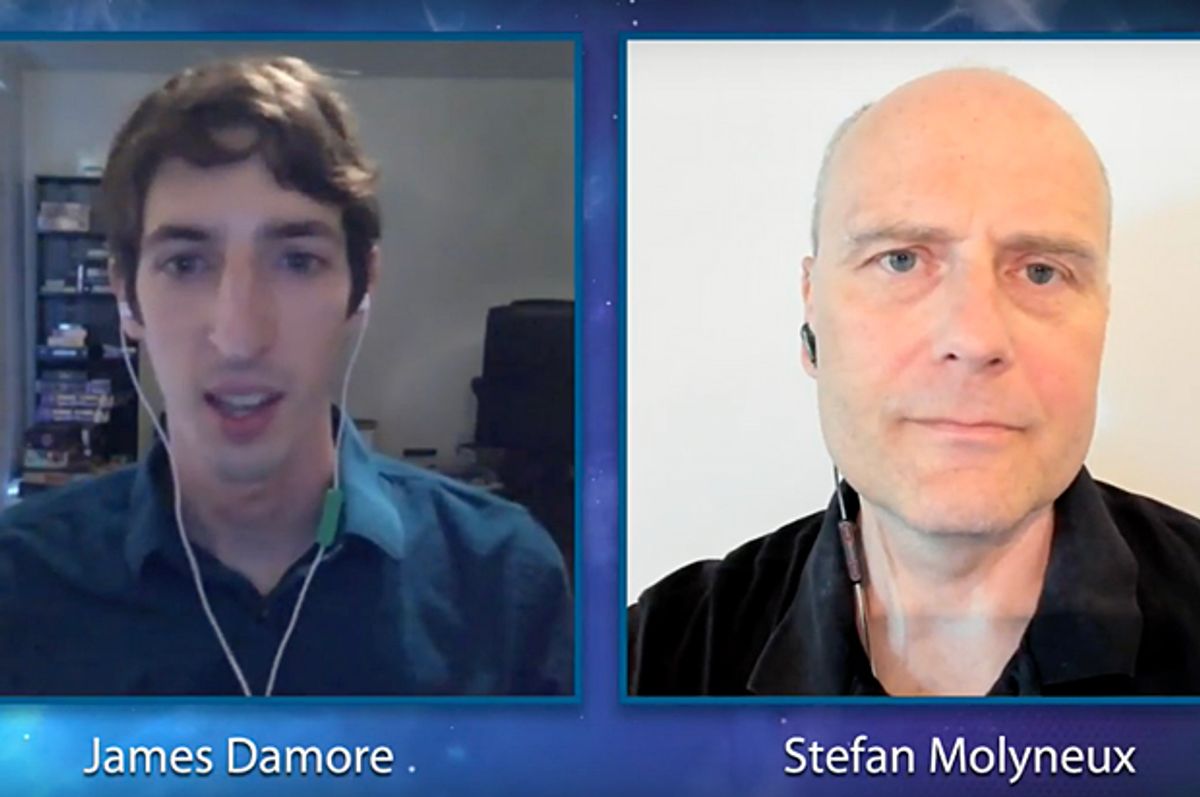 The alt-right has a new hero.

James Damore, the Google software engineer fired on Monday for writing an anti-diversity memo that went viral over the weekend, gave his first interviews to supportive YouTube personalities. The separate interviews were conducted by Jordan B. Peterson and Stefan Molyneux, both controversial alt-right commentators.

Peterson is a Canadian clinical psychologist whose controversial views about “white privilege” and identity politics have made him an alt-right celebrity. Molyneux, who is also Canadian, has garnered more than 600,000 subscribers to his YouTube channel for videos titled “Why Feminists Hate Men” and “In Trump We Trust.” The interview with Peterson has since been deleted, but the 45-minute Molyneux interview can be viewed here.

Hours before Damore lost his job, Google CEO Sundar Pichai said portions of Damore’s 10-page memo claiming that women were less biologically suited to be engineers was “not OK.” On Monday, Damore filed a complaint with the National Labor Relations Board. "I have a legal right to express my concerns about the terms and conditions of my working environment and to bring up potentially illegal behavior, which is what my document does,” he told the New York Times.

But Damore has garnered a lot of support from the right who view him as a victim of a political correctness intolerant of alternative viewpoints.

In his interview with Molyneux, Damore claims he’s unwilling to speak to the mainstream media because “they just want to twist whatever I say towards their agenda.”

"There's just so much hypocrisy in the things they are saying,” Damore told Molyneux. “I decided to create the document to clarify my thoughts."

In the memo titled “Google's Ideological Echo Chamber,” Damore accused Google’s management of holding a progressive bias, accusing the search giant’s diversity agenda of creating a “politically correct monoculture” – the kind of views that the alt-right gobbles up with glee.

The memo takes on an “I’m not racist but…” structure in which Damore characterizes himself early on as unbiased and unwilling to “endorse using stereotypes.” Many of the views expressed in the document are fairly innocuous, even bland, like claiming that “neither side is 100% correct” or that “men differ from women”

But what got him fired were the parts where Demore drifts into defining biological and psychological differences between men and women, offering up such nuggets of wisdom as  “women, on average, have more . . . neuroticism,” that “women on average show a higher interest in people and men in things” and that women are inherently more likely to be “agreeable” and less “assertive.”

Demore’s conclusion: women are not as psychologically built as men to succeed in the engineering field as if to suggest Google’s attempt to increase the number of female engineers in its ranks is tantamount to going against the natural laws of biology itself.

While his conclusions seem offensive to many, any cursory review of social media and news outlets shows that Demore has many allies on the right who want to paint him as the latest victim of liberal intolerance.