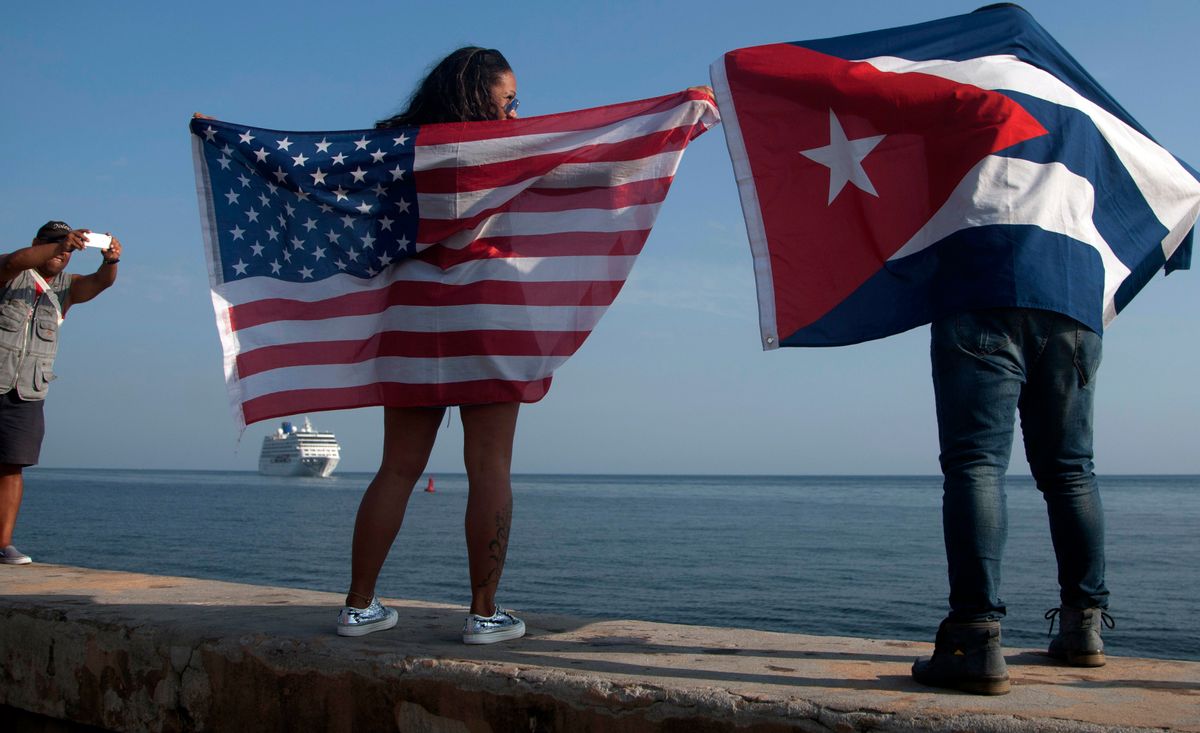 In this May 2, 2016 file photo, Yaney Cajigal, left, holds out a Stars and Stripes, and Dalwin Valdes holds a Cuban national flag, as they watch the arrival of Carnival's Adonia cruise ship from Miami, in Havana, Cuba, the first step toward a future in which thousands of ships a year could cross the Florida Straits, long closed to most U.S.-Cuba traffic. A rare 2016 poll of Cuban public opinion has found that most Cubans approve of normal relations with the United States and large majorities want more tourism and private business ownership. (AP Photo/Fernando Medina, File) (AP)
--

The FBI is reportedly investigating who was behind an “acoustic attack” that inflicted at least two staffers of the U.S. Embassy in Havana with sudden hearing loss. Washington expelled two Cuban diplomats earlier this year in response to the incident, the U.S. State Department said on Wednesday.

The Cuban foreign ministry said it was investigating the allegations.

“Cuba has never, nor would ever, allow the Cuban territory to be used for any kind of action against accredited diplomats or their families,” the ministry said late Wednesday, according to the BBC and other news outlets.

The alleged attack comes after the two countries reinstated diplomatic relations in 2015 after more than 50 years. But relations that were thawing into a détente under President Barack Obama began to turn sour after President Donald Trump reinstated some travel and trade restrictions in June as he had promised to do during his campaign.

Citing officials familiar with the investigation, The Associated Press reported on Wednesday that embassy staff in Havana began suffering from hearing loss in the fall of 2016. U.S. officials later concluded that a device operating outside the range of audible sound has been installed inside or near diplomatic residences in Havana.

Acoustic-weapon technology is used by the U.S. Navy to enforce no-go buffers around vessels by blasting targets with a narrow beam of ear-splitting sound. These “sound lasers” have also been used controversially by authorities in the U.S. and Israel to disperse protesters and other unruly crowds.

But in this case, the technological culprit could be a device that emits so-called infrasound, audio with frequencies at the edge or below the range of human hearing. Low-frequency sound waves are what whales use to communicate over long distances, and they can be emitted by thunderstorms and some machinery and devices. Infrasound and its effect on the human body have even been used to explain some people’s beliefs in ghosts.

At low-enough frequencies, infrasound can cause hearing loss, disorientation, spasms, panic, vomiting and even unconsciousness, according to the U.S. National Institutes of Health.

Officials aren’t yet ready to outright blame the Cuban government and have not ruled out the possibility that operatives from a third country may be operating without Havana’s knowledge or support. Russia and Venezuela, two countries with historically close ties to Cuba, could have motives to meddle in U.S.-Cuban relations.