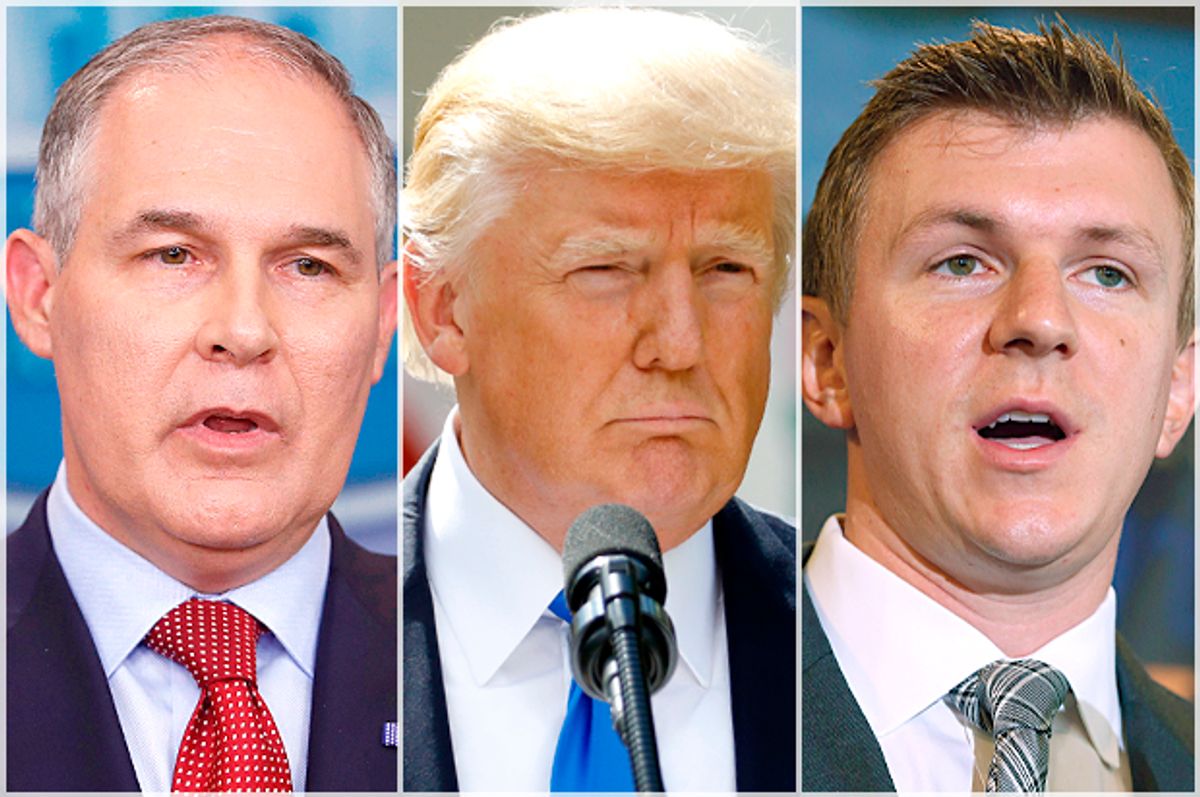 While much of the media obsesses over a pointless debate about whether "free speech" should protect an employee who abuses his co-workers with outrageous claims masquerading as "science" (the answer is no), there's a serious assault on real science underway. Conservatives, including those in the Trump administration, are now trying to undermine the ability of scientists and activists to communicate ideas to the public. Climate change, unlike the supposed intellectual inferiority of women, is a genuine scientific finding with a strong consensus behind it. That's likely why the right is increasingly looking to McCarthyite tactics to demonize and suppress information about it.

On Tuesday, Jane Mayer of The New Yorker reported that James O'Keefe, the notorious right-wing hoaxer who tries to pass off his disinformation campaigns as investigative journalism, may have been caught trying to run one of his scams on the League of Conservation Voters. League officials have filed a complaint alleging that O'Keefe's team at the Veritas Project created an elaborate scheme to ingratiate themselves with the organization, in hopes of baiting someone who works there into saying something that could be taken out of context and used to demonize the group.

That has been the principal and indeed only tactic employed by O'Keefe and his comrades since his glory days of 2009, when he successfully hoodwinked both media and elected officials with a hoax video falsely alleging that workers at ACORN were aiding and abetting sex traffickers. O'Keefe and his colleagues, including David Daleiden or Lila Rose, have a standard M.O.: Put out a video, using undercover footage taken out of context, to make false claims against progressive organizations or activists, with the hope that the lie spreads faster and farther than the inevitable debunking ever could.

O'Keefe and his cronies usually go for targets that play off the Breitbart base's racist and sexist anxieties, so it's a bit surprising to see them target a group that does the unsexy work of using electoral politics to advocate for reducing pollution and protecting public lands. But this all fits into what appears to be a growing strategy, empowered by Trump's election, of right-wingers seeking to intimidate and silence those who want to educate the public about the reality of climate change.

Also on Tuesday, Breitbart News published a straight-up bonkers piece by Matthew Boyle based on the premise that there is something deeply sinister or even illegal about reporters contacting EPA employees to ask them how Trump appointee Scott Pruitt -- a noted climate-change skeptic -- is handling his job as head of the agency. Boyle was roundly mocked on social media for trying to put an alarmist spin on standard journalistic practice: Trying to inform the public about what their president's appointees are doing with taxpayer money. But as Matt Gertz at Media Matters has pointed out, there may be something more disturbing here than the usual Breitbart nonsense.

Boyle apparently got his hands on an email exchange between EPA union representative John O’Grady and New York Times reporter Coral Davenport, who asked whom she could speak to in order to verify rumors about Pruitt's behavior at the EPA. At the end of the article, Boyle published a list of the 34 employees to whom O'Grady forwarded the request.

Trump's administration loves throwing the word "leaker" around, equating every bad story shared by a government employee with the release of classified information that threatens national security. In reality, however, EPA employees exposing malfeasance at their agency are protecting national security, which most experts believe is in imperiled by climate change and endangered by Trump and Pruitt's efforts to hide the scientific realities.

Despite all the squawking from the right about "free speech" whenever someone faces social (but not legal) consequences for saying bigoted things in public, this is what a real attack on free speech looks like. Journalists, activists and government employees are being intimidated, harassed and subtly threatened for trying to get out the truth about climate change and expose the way taxpayer money is being misused by people who want to deny its reality.

There were reasons to worry that the effects are being felt in federal agencies, even before Boyle published his blacklist. On Monday, the Guardian published a report showing that officials at the U.S. Department of Agriculture had sent emails to staffers telling them to stop using terms like "climate change," "greenhouse gases" and even "sequester carbon." This follows a similar story published by Politico in March that exposed how officials at the Department of Energy were also instructed not to use the terms "climate change," "emissions reduction" or "Paris Agreement."

Under the circumstances, it's no surprise that someone shared with The New York Times a draft report written by scientists at 13 federal agencies that chronicles the current — not future, but current — problems faced by Americans due to rising global temperatures. The leakers, the Times reported, were afraid their higher-ups in the Trump administration would take measures to censor, alter or suppress the findings.

As David Roberts at Vox points out, there's no evidence so far that Trump intended to suppress the report. He may have been planning on doing what he usually does, which is to ignore and/or lie about information that he finds displeasing. But in this environment, there is clearly reason to believe that conservatives have escalated past trying to deny the facts and are moving toward actively suppressing information.

Simply by becoming president, Trump has empowered and energized the most authoritarian tendencies, including bullying and a desire for censorship, found among many on the right. This new report from the government scientists, however, points to another reason: Climate change is no longer some abstract problem that conservatives can dismiss as hypothetical. People, particularly in rural areas that tend to vote Republican, are starting to see and feel evidence of rising temperatures and the effects they have on weather and agriculture. That might make them more open to hearing a truth that was easier to deny in the past. Under those circumstances, there's good reason to suspect we're seeing the beginning of a shift away from straightforward denial of climate change to more aggressive efforts to suppress the truth.