Western states' July temperature was 2.1°F above the 20th century average of 73.6°F 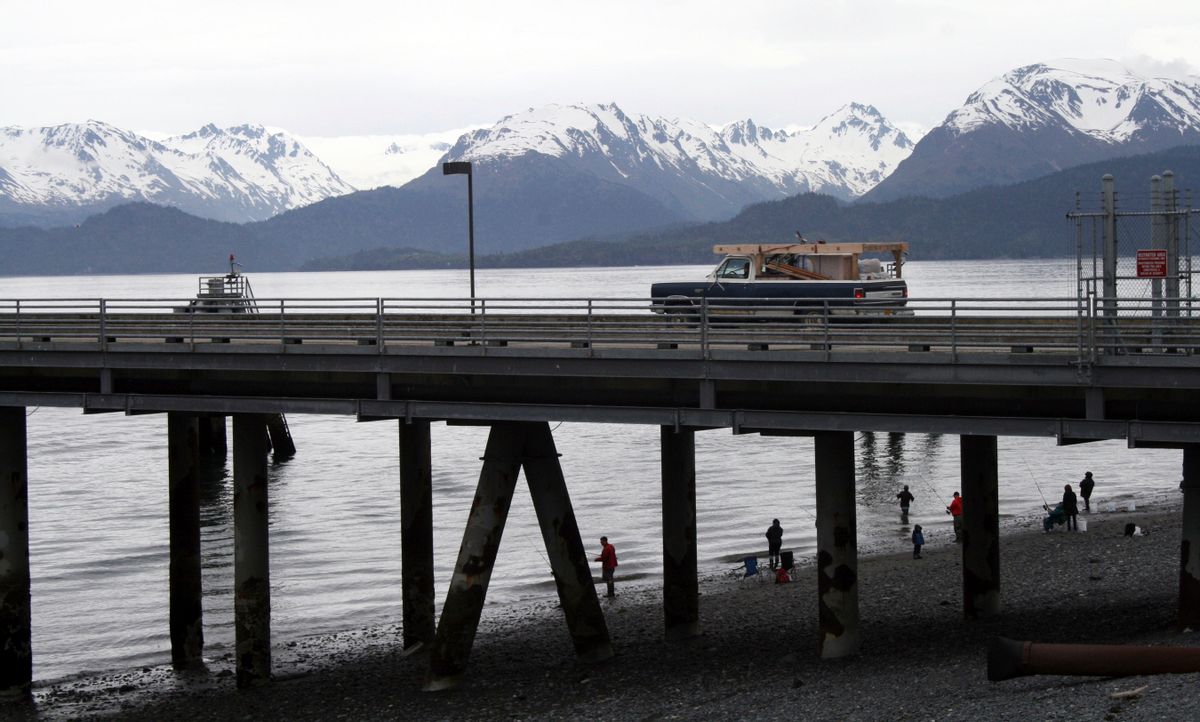 In this May 24, 2015, photo a vehicle drives on a pier to be loaded onto an Alaska state ferry while people fish underneath the pier in Homer, Alaska. (AP Photo/Mark Thiessen)
--

The northernmost city in the United States just had its hottest July on record, as other spots in Alaska had their hottest month overall. Heat records also fell in a few western cities, as well as the fearsomely hot Death Valley, where July was the hottest month ever recorded on Earth.

Those hotspots stood out in what was the 10th hottest July on record for the Lower 48 states, topping off the second hottest year-to-date for the country by a hair, according to data released Tuesday by the National Oceanic and Atmospheric Administration. Three states are having their hottest year on record more than halfway through the year, while several more are running in second or third place.

While weather patterns have a big impact on monthly temperatures — as the cooler weather of early August shows — the overall warming of the planet is tipping the odds in favor of record heat. In fact, July had four times as many daily record highs as record lows, according to meteorologist Guy Walton, who keeps track of such streaks using NOAA’s data.

The record heat in Alaska fell along the North Slope, which lies above the Arctic Circle, and the central interior of the state.

For the North Slope, “a fair chunk” of the heat could be attributed “to the very early loss of sea ice” that normally clings to the coast until August and keeps temperatures lower, Rick Thoman, climate science and services manager for the National Weather Service’s Alaska region, said. “There’s basically now no sea ice left within 200 miles of Alaska.”

That early loss of sea ice was followed by storms that pulled up warmer air from the South, pushing the average July temperature in Utqiaġvik (Barrow) to 46°F. While that may not sound like summer weather to the rest of the country, it is 5°F above the long-term average for a city perched at the same latitude as the middle of the Greenland ice sheet.

In the interior of the state, there weren’t any significant heat waves during the month, but there also weren’t any cool days because of a lack of cloudy, rainy weather, Thoman said. Instead, the month saw “this grinding, day-after-day” warmth.

The North Slope will continue to be warm for the next few months as the sea ice will be gone until it begins to refreeze in the fall, Thoman said.

Not much sea ice left near Alaska & it's only early August: big diff from this time last year. #Arctic#akwx@DaveSnider@Climatologist49pic.twitter.com/gWY3ArIkwD

In the Lower 48, Bakersfield, Calif., Reno and Salt Lake City also had their hottest July on record thanks to high-pressure ridges that helped temperatures soar and break several daily heat records across the region. The hot, dry weather also helped fuel wildfires that erupted and spread rapidly across the region.

Miami was also record hot for not just July but for any month, fueled both by the number of days above 90°F (every day of the month but the last was that hot or hotter) and the fact that temperatures stayed extremely warm overnight.

Death Valley, already known for its ferocious heat, took it to another level in July, with an average for the month of 107.4°F, the Washington Post’s Capital Weather Gang reported. Overnight lows were again a major factor, as they didn’t fall below 89°F on any night during the month there.

Three nights actually had a low temperature between 102°F and 103°F. Brian Brettschneider, a climatologist at the International Arctic Research Center in Fairbanks, found this was the hottest month recorded at any station in Global Historical Climatology Network database kept by NOAA.

The cool start to August east of the Rockies, and the suggestion that that pattern will continue for much of the month, could knock 2017 down to third place, Jake Crouch, a climatologist with the National Centers for Environmental Information, said.

At the state level, North Carolina, South Carolina and Florida are all having their warmest year to date. In April, a swath of 14 states from the mid-Atlantic to Texas was on record pace, but cooler temperatures in May knocked several out of the running, though they are still having their second or third warmest year on record so far.

While weather patterns played a clear role in boosting temperatures in many parts of the country, the overall rise in average temperatures caused by greenhouse gas emissions has made record heat more and more likely and record cold increasingly rare.

Every month since December 2014 has had more record highs than lows, according to Walton.