Sure, the torrent of Trump leaks is irresistible — but some leaks serve to protect the rich and powerful

How the tale of Chris Christie, Jared Kushner's dad and one ill-timed leak made the Trump White House possible 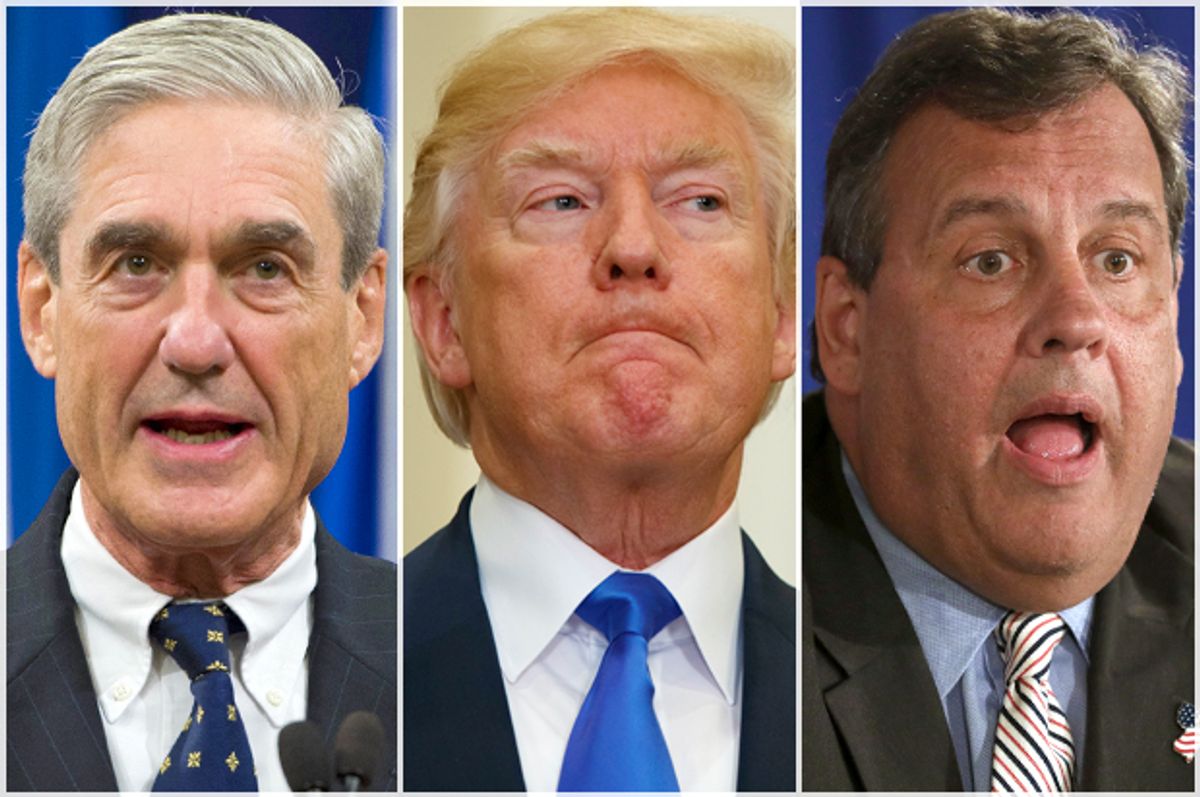 We live in perilous times, and many Americans have pinned their hopes on the national intelligence and law enforcement communities to restore our Republic. It’s almost like Robert Mueller is playing Sam Chisolm (aka Denzel Washington), the charismatic bounty hunter in the recent remake of "The Magnificent Seven."

We’re like the townspeople hiding in the basement of the general store, while the streets of Rose Creek are (we hope) made safe from the predations of Bartholomew Bogue, the robber baron, played in real life by Donald Trump.

No doubt people in this time of such despotic rule require heroes; no doubt there are many to be found in the alphabet soup of the intelligence and law enforcement agencies. But it wasn’t all that long ago — within living memory, for those of us of a certain age -- that the FBI unlawfully targeted the Rev. Martin Luther King Jr., hoping to drive him to suicide, and J. Edgar Hoover’s COINTELPRO worked hard to subvert democracy.

With such a large portion of the public praying for a restoration of pre-Trump decency and decorum, there is an insatiable appetite for leaks from prosecutors and others “close to investigations,” for signs of progress. But for reporters who receive them, these kinds of law enforcement leaks are their own special, Faustian bargain. Federal prosecutors have a lot of power as it is; when they also get to drive the media narrative without leaving fingerprints, it’s a perversion of due process, no matter who the targeted defendant is.

And there can be unintended consequences.

Over time, these leaks can become the dominant narrative that leaves defense attorneys swinging at phantoms in the Kafkaesque shadows. Meanwhile, the reporter who has breathlessly repeated out the prosecutor’s (or other official’s) anonymous narrative has been deputized and potentially compromised as a tool of the state.

And then there is the vainglorious prosecutor. Leaks, coming from a prosecutor's office are usually intended to spread the boss’ image as a larger-than-life, Eliot Ness-like figure. Such leakers take a chance, whispering about plea deals before they are actually executed, so the story will show up in the next day’s headlines as a done deal. Headlines prompted by the premature leak can create an excellent opening for a savvy defendant with a nimble defense counsel, who can say “never mind” -- even as the crush of microphones and cameras hang around, hungry for the promised guilty plea.

In fact, this was precisely the case back on Aug. 17, 2004, when “federal law enforcement sources speaking on the condition of anonymity” told the news media that the very next day, at 11 a.m. sharp, Charles Kushner -- father of Trump son-in-law Jared, real estate mogul and one of the Democratic Party’s largest national campaign donors -- would plead guilty to a long litany of corruption charges.

Kushner was under investigation by a U.S. attorney in New Jersey who was about to get a lot more famous. His name was Chris Christie. Thanks to that leak, Christie’s big “get” was the top news story on the morning of Aug. 18. But as the media waited in Newark for the official deal to be confirmed in the federal courtroom, the appointed time came and went. Behind the scenes, Kushner’s lawyers and Christie's team were going back and forth over the terms and conditions of the deal.

By the end of the day, Kushner would enter a guilty plea as advertised, but he made no commitment to cooperate with the government or to offer up any potential co-conspirators. According to the Department of Justice’s press release, Kushner pleaded guilty to 18 counts of filing false tax returns, one count of retaliating against a cooperating witness and one count of making false statements to the Federal Election Commission.

By the evening news cycle, the morning’s news of a plea deal was finally true, and Christie could bask in the glory. "This is a great victory for the people of New Jersey," said the federal prosecutor who would soon run for governor. "No matter how rich and powerful any person may be, they will be held accountable for criminal conduct by this office."

Scroll forward to March of 2005, though, and Kushner was sentenced to just two years -- which, The New York Times reported at the time, was the most he "could have received under a plea agreement reached last September,” with Christie.

In the months of high-profile press conferences leading up to the sentencing, it was clear that Christie’s office had been out-lawyered by the Kushner team. And the Christie-approved leak -- before he had closed the deal -- definitely hadn’t helped. Before sentencing, the Department of Justice wrote a letter to the judge observing that, in the final analysis, Kushner showed a “failure to accept responsibility” for a long litany of criminal acts that could have landed him in federal prison for decades.

Moreover, prosecutors complained that Kushner had stiffed them on documents he was supposed to turn over so that they could continue to probe his multimillion-dollar real estate enterprise -- which, by the way, his son Jared would take over. The New York Times reported that the feds couldn’t even get a stipulation from Kushner to confirm that all the covert sex tapes he had produced had been surrendered or destroyed.

As a final kick in the ass to the Christie team, the judge rejected their request to tack on additional jail time, faulting them for drafting a sloppy agreement whose language failed to secure Kushner’s compliance with the original deal.  The real estate mogul assured the judge, however, that the videotapes in question had been destroyed.

In April 2006, after 14 months in custody, Charles Kushner moved to a halfway house to complete the rest of his sentence. He was released in August of that year.

Prior to the federal investigation, Kushner’s campaign-donating largesse had earned him a seat on the Port Authority of New York and New Jersey. In fact, New Jersey Gov. Jim McGreevey had been poised to name Kushner as the chairman of the powerful bi-state agency. Things started to unravel, though, when the real estate magnate bristled at having to face tough questions (well before his criminal indictment) from a state legislative panel weighing his confirmation.

In the end, Kushner avoided a trial, successfully stymied prosecutors and was not required to give up anybody to the government. Chris Christie got his high-profile “win” and convicted a major Democratic donor. No doubt it was a grand resolution for all the principals involved.

But was justice served? What if prosecutors had gone after Kushner’s business as aggressively as they would have against a Newark drug dealer’s enterprise? No doubt his relatively easy treatment for such a long string of serious crimes reflects the tacit understanding in this country that political corruption is a venial sin, barely worth prosecution. In that rare circumstance in which the high and mighty are held to account, it is usually with a light and merciful touch, rarely experienced by those convicted of what society considers “real” crimes.

Repeat that over and over for generations and you end up with Donald Trump in the White House, and Charles Kushner's son by his side.