Why 1987 remains the most important moment in alternative rock

From chart hits to mainstream breakthroughs, it was the year modern rock came into its own 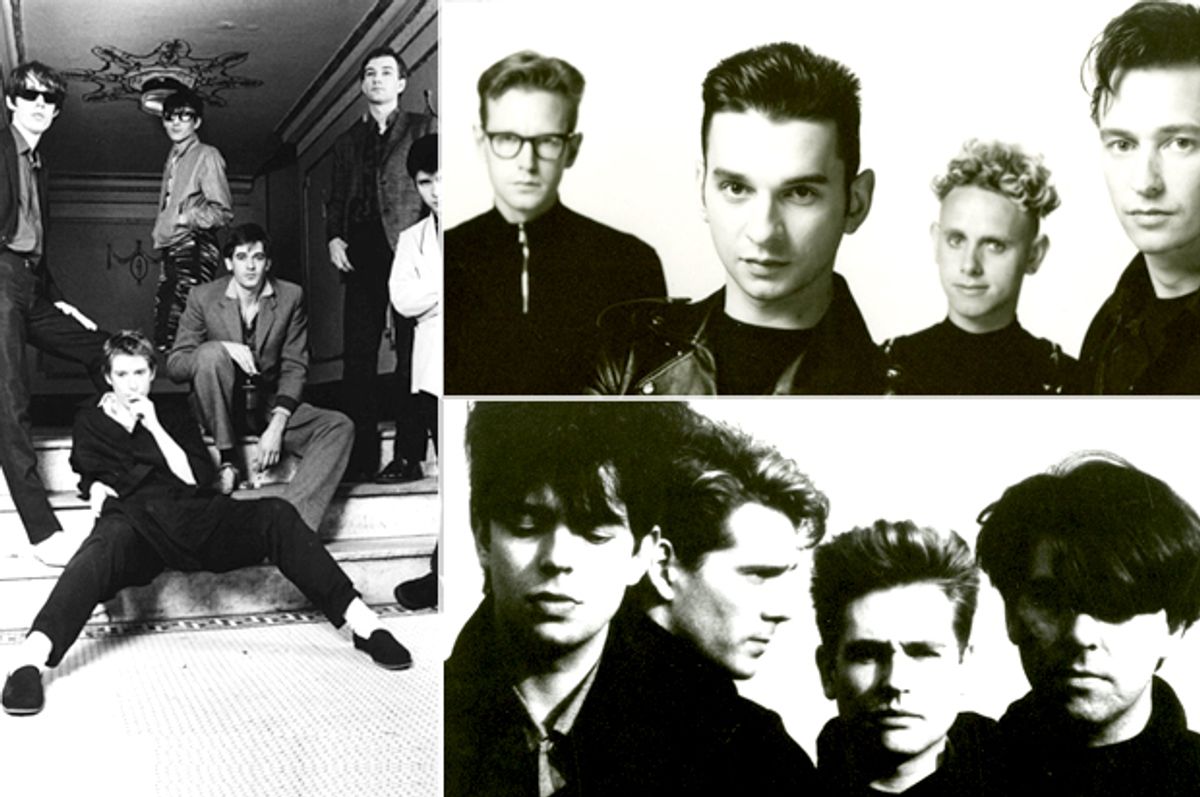 The National has achieved many things in its career: music festival headlining slots, Grammy nominations and near-chart-topping albums. However, the brooding, Brooklyn-via-Cincinnati band hasn't had a No. 1 single — until now.

Billboard reports "The System Only Dreams in Total Darkness," a song from the National's forthcoming "Sleep Well Beast" album, reached the top slot of the Adult Alternative Songs chart for the week of August 19, beating Arcade Fire's "Everything Now" by a measly two spins.

In addition to the National and Arcade Fire, the rest of the Adult Alternative Songs chart top 10 includes a slew of seasoned artists: Portugal. The Man, Spoon, The War on Drugs, The Killers and Jack Johnson. Sonically, these acts don't overlap much. However, on an aesthetic level, they all promulgate a musical approach predicated on constant metamorphosis.

The Killers' "The Man" is an icy, funky strut; the War on Drugs' "Holding On" is rife with sparkling Springsteenisms; Portugal. The Man's "Feel it Still" is a taut, soulful shimmy. The biggest chameleons might be Spoon, whose latest effort is the ominous, funky "Can I Sit Next to You," which feels like Duran Duran filtered through a paper shredder and pieced back together.

In a striking parallel, the composition of the Adult Alternative Songs chart — notably the abundance of veteran bands who are fearless about evolution — echoes the equally transformative alternative bands dotting 1987's music landscape.

That's not necessarily surprising: 1987 was an enormously influential year that shaped how fans and artists alike create, consume and appreciate so-called modern or progressive music.

To understand why 1987 is a cultural inflection, it's best to consider it the year a burgeoning underground movement crystallized and mobilized. Certain facets of this movement were already in place, of course. Specialty national video shows such as MTV's "120 Minutes" and "I.R.S. Records Presents The Cutting Edge" and USA's "Night Flight," as well as regional video shows (V66 in Boston and MV3 in Los Angeles) were already airing clips from new wave and so-called "college rock" bands. Modern rock-leaning radio stations — notably KROQ in Los Angeles and the Long Island powerhouse WLIR — were also giving these new groups a platform.

On a more mainstream level, John Hughes-associated movies such as 1984's "Sixteen Candles" and 1986's "Pretty in Pink" combined relatable depictions of teen angst with a cool-mixtape musical vibe. Hughes treated bands such as Thompson Twins, New Order, OMD and the Psychedelic Furs like futuristic pace-setters. The people responded in kind.

In 1986, OMD's "If You Leave," from Hughes' "Pretty in Pink" peaked at No. 4 on the U.S. pop charts. No wonder critic Chris Molanphy, writing in Maura Magazine, points to "how pivotal Hughes was in helping to break what became known as alternative rock in America — he served as a bridge between what was known in the first half of the ’80s as postpunk or new wave and what would be called alt-rock or indie rock by the ’90s."

Hughes' imprint reverberated well beyond films. For example, the movie "Pretty in Pink" took its title from the Psychedelic Furs song of the same name. Appropriately, the U.K. band re-cut the tune, which originally appeared on 1981's "Talk Talk Talk," for the film's 1986 soundtrack. This slicker new version landed just outside the top 40, at No. 41. However, the goodwill earned by this re-do buoyed the Furs through 1987: The desperate swoon "Heartbreak Beat," the lead single from the band's 1987 LP, "Midnight to Midnight," became the Furs' only U.S. top 40 hit, peaking at No. 26 in May.

"Midnight to Midnight" polarized fans: A collection of full-on synth-pop gloss, it bears little resemblance to the group's early, moody post-punk. Yet bold evolutions were a 1987 trend; multiple established modern and indie bands staked a decidedly contemporary claim, sometimes in ways that completely overhauled (or at least added intriguing new dimensions to) their previous sounds.

(Let the record show that this phenomenon also has precedent: For example, Scritti Politti's glittering synth-pop gush "Perfect Way," which reached the top 15 in 1986, is a far cry from the band's scabrous post-punk roots.)

Elsewhere in 1987, Echo & The Bunnymen buffed up their gloom on a self-titled album with sharper production, while Depeche Mode countered with "Music for the Masses," an (appropriately) massive-sounding record with a dense, industrial-synth sound. The Replacements, meanwhile, teamed up with producer Jim Dickinson for "Pleased to Meet Me," their most streamlined and focused rock record yet. R.E.M. forged a production partnership with Scott Litt that would stretch into the '90s, releasing the loud-and-proud political statement "Document."

In many cases, these evolutions didn't necessarily lead to immediate commercial dividends. In fact, the Smiths — inarguably one of the biggest cult alternative acts in the U.S. — broke up in 1987, making their forward-sounding final album, "Strangeways Here We Come," a posthumous swan song. However, in 1987, the upper reaches of the pop charts were noticeably more amenable to modern bands.

Consider this a culmination of a slow and steady trend — how the chart inroads made by OMD and the Psychedelic Furs paired with those made by Pet Shop Boys ("West End Girls" hit No. 1 in 1986) and INXS (who set the stage for its blockbuster 1987 record "Kick" with 1985's top 5 smash "What You Need").

"Just Like Heaven," from 1987's "Kiss Me, Kiss Me, Kiss Me," became The Cure's first U.S. mainstream top 40 chart hit, peaking at No. 40 in 1988. The shimmering 1987 synth-pop gem "True Faith" also became New Order's first top 40 single, landing at No. 32. Other bands found even greater success: Midnight Oil's "Diesel and Dust" spawned that band's first mainstream hit, the top 20 entry "Beds Are Burning," while R.E.M. landed its first top 10 single with "The One I Love" from "Document." Los Lobos' cover of "La Bamba" hit No. 1 (though having a major Hollywood movie behind them helped tremendously).

What's interesting: Besides individual radio station charts and specialized trade magazines, these alternative acts didn't yet have a dedicated Billboard chart. The publication only launched its Modern Rock Tracks chart on Sept. 10, 1988, "in response to industry demand for consistent information on alternative airplay," as it noted in that week's issue. In hindsight, it's easy to see this chart as a reaction to 1987's alternative groundswell. The influence of these groups was now impossible to ignore, and measuring their reach and impact — no doubt crucial for label bean counters, if nothing else — made sense.

In an interesting twist, 1987's beginnings and endings were as formative as their transformations. That year's dissolution of the Smiths and Hüsker Dü led to each band's frontman — Morrissey and Bob Mould, respectively — launching fruitful and vibrant solo careers that endure today. Debut records from Jane's Addiction (a self-titled effort) and Pixies ("Come On Pilgrim"), and second albums from Dinosaur Jr ("You're Living All Over Me") and Faith No More ("Introduce Yourself") put forth an aggressive, hybridized rock sound that presaged '90s grunge, metal and punk. Even Crowded House's 1986 debut LP finally spawned two hits in 1987, "Don't Dream It's Over" and "Something So Strong."

And, in terms of the touring circuit, plenty of popular 1987 acts continue to find success; U2 playing 1987's "The Joshua Tree" to packed stadiums is the most obvious one. Depeche Mode is currently embarking on an amphitheater tour while Echo & the Bunnymen and Violent Femmes have toured sheds together all summer. In spring 2017, Psychedelic Furs tapped Robyn Hitchcock as an opener. In the fall, the band is teaming up with Bash & Pop, featuring the Replacements' Tommy Stinson, for tour dates.

These tour dates in particular have led several writers to recently question whether "80s pop" or "classic alternative" could become the new classic rock. It's an intriguing idea, although one the radio consultants at Jacobs Media doubt has traction.

"While these bands may do well at state fairs and other summer festivals boasting well-stocked lineups of bands, their ability to support a format is questionable," Fred Jacobs wrote in a recent blog post. "Classic Rock -- and its derivatives -- as well as Oldies stations were predicated on the power of nostalgia -- not just for a few thousand fans in a market, but for tens of thousands or more of die-hard supporters. We’re talking mass appeal vs. niche."

Jacobs then went on to point out that Echo & The Bunnymen received only seven spins on a Classic Alternative station in a recent week. "It’s hard to create a groundswell of support for poorly exposed music that’s now 30+ years old," Jacobs adds.

In a sense, current successful bands like Arcade Fire, Spoon and the National are better positioned than their 1987 analogs to avoid this trap. Multiple channels — radio, video, streaming, live shows — make it easier for bands to gain exposure and reach more people.

At the same time, 2017's fractured musical culture means that there are plenty of people who either don't listen (or don't need to listen) to any of these bands. For proof, just look at the puzzled reactions to Arcade Fire nabbing the Album of the Year Grammy in 2011. One person's mainstream band is another's niche or unknown act. Perhaps the underlying concept that drove alternative music culture's 1987 rise -- the mainstream cracking the door open to outsiders -- is still alive and well in 2017.