Seeing an image of J. Law standing near the Statue of Liberty was too triggering for the alt-right snowflake 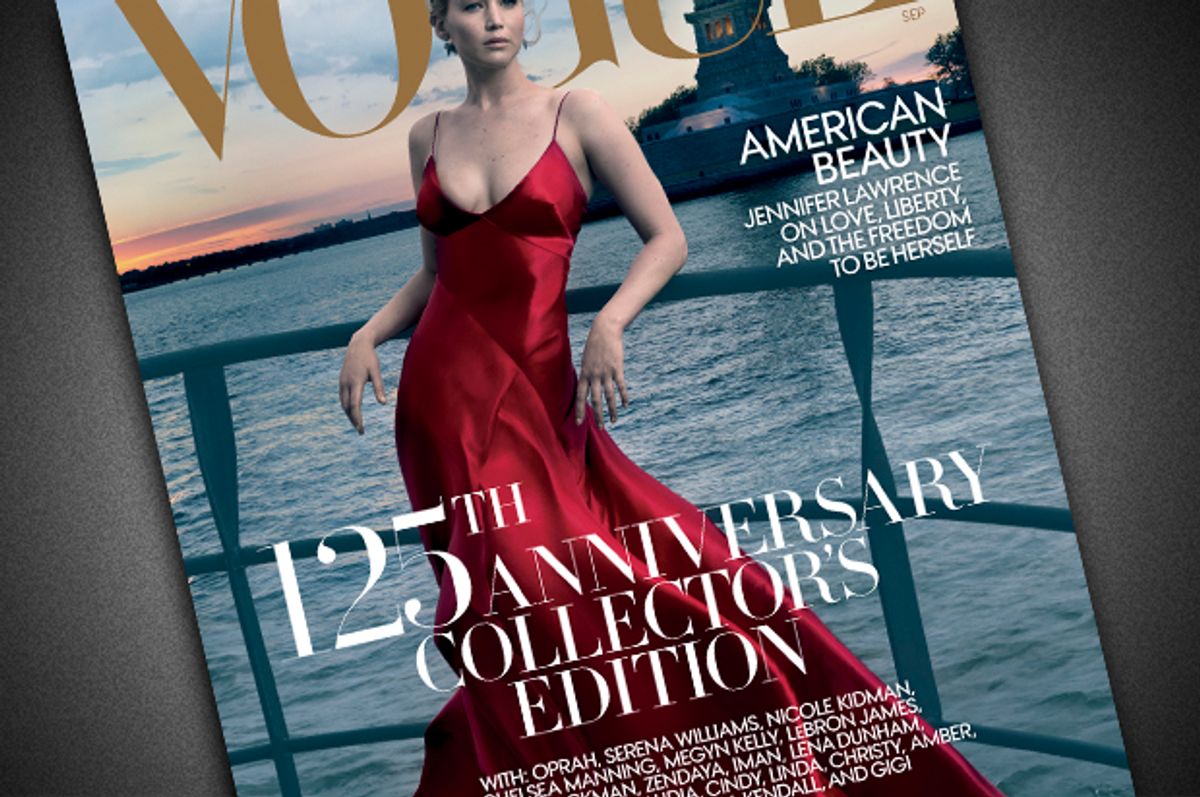 The cover of the September issue of Vogue still has considerable cachet in the overlapping worlds of celebrity, media and fashion. Bringing the oversized issue to stands takes months of careful preparation and hoards of editors with eyes trained for detail.

This year's issue is no different — Jennifer Lawrence graces the magazine dressed in a full-length red, satin gown, standing on a boat with the country's symbol of independence in the background: the Statue of Liberty.

To most viewers, the cover is just that, a magazine cover. But to one far-right news editor, the latest issue of Vogue is an "attack" on conservatives. John Carney, the finance and economics editor for the alternate universe that is Breitbart, blasted the cover on Twitter when he shared a picture of the magazine.

Carney told his 60,000+ followers, "We're going to have to create a full #MAGA shadow cultural industry because the Opposition Media can't even do fashion without attacking us." And, in a now deleted tweet, Carney called the cover "an allusion to our current immigration debate taking the #poemlaw side."

The "case" Carney refers to stems from the White House press briefing debate between CNN's Jim Acosta and Trump advisor Stephen Miller, where they battled over the administration's newest policy that would cut legal immigration in half. "The Statue of Liberty says, ‘Give me your tired, your poor, your huddled masses, yearning to breathe free.’ It doesn't say anything about speaking English or being able to be a computer programmer," Acosta said last week.

Miller fired back, arguing the Emma Lazarus poem on the statue was "added later," therefore it didn't count. He then claimed Acosta had a "cosmopolitan bias," further explaining "That is one of the most outrageous, insulting, ignorant, and foolish things you’ve ever said."

As thousands of responses, which have largely been negative, rolled in, Carney replied saying, "The reaction by leftists to my criticism of Vogue’s cover is all the proof you need about its political content." He continued: "If you want the Statue of Liberty to be a non-partisan symbol of America, don't make her central to your case against immigration reform."

Zara Rahim, the communications director for Vogue, shot back at Carney's tweet, clarifying the photoshoot was wrapped in June, a full two months before the event he is reportedly referring to, and before the statue became a symbol met with contempt from the right.

"I'm sorry but I refuse to participate further in a dialogue that perverts the Statue of Liberty," Rahim added in a later tweet.