Trump's "frenemy of the week" campaign is starting to backfire: Which Republican will he try to humiliate next?

First Sessions, then McMaster — this week it's Mitch McConnell. These former loyalists will turn on him eventually 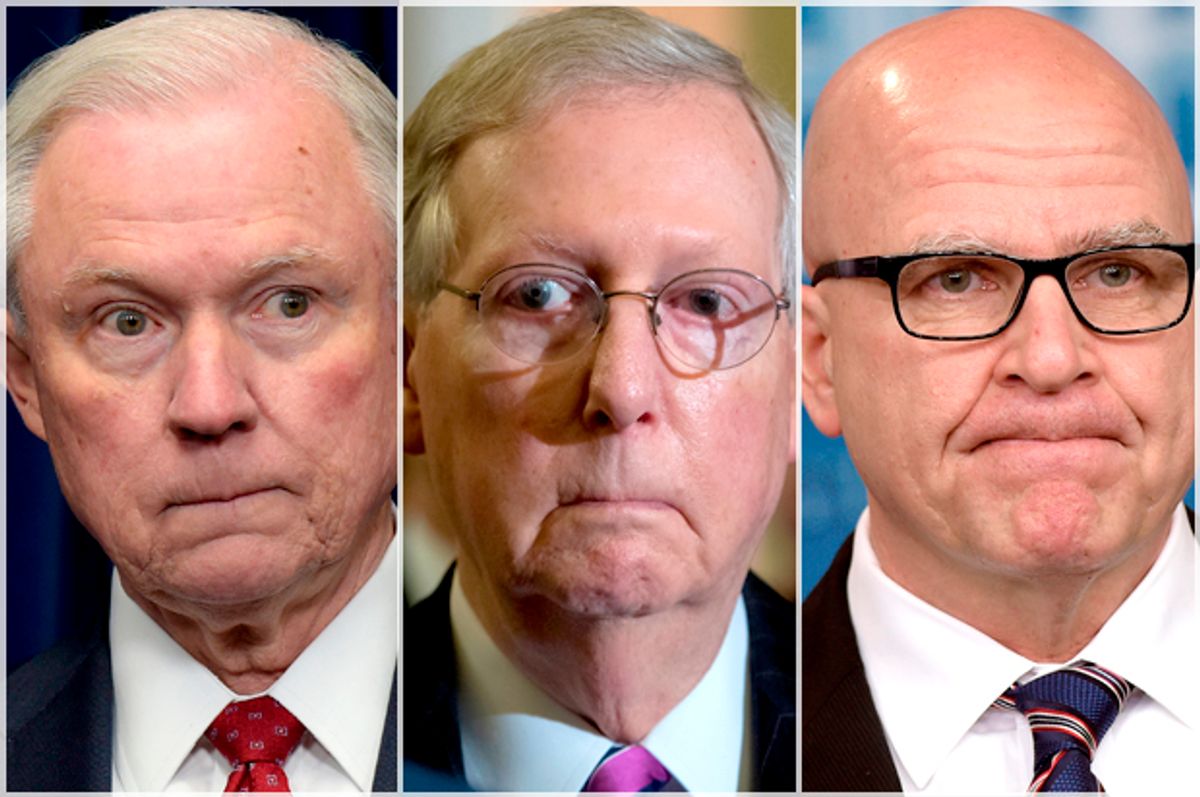 A few years ago, there was literally no way I would ever have favorably retweeted A-list conservatives like Bill Kristol, David Frum or George Will. And yet here we are. The Trump presidency has had one major unintended consequence: Reasonably-minded combatants on the right and left have joined together in opposition to the sack-full-of-monkeys that is our current White House. In the last year or so, I’ve also found myself applauding heretofore unheard-of allies like Sen. John McCain and Sen. Jeff Flake for putting nation over party and, at least when it counts, standing up to Trump and the destabilization he’s precipitating.

In the bigger picture, I see this single area of unity as a possible opening to form an alliance for rebuilding after Trump is ousted, whether by electoral defeat, impeachment or resignation. There will surely be mountains of work to do in the wake of all this mayhem simply to make sure another Trump-like character never again ascends to this level -- work that I hope is beginning today, as we speak. For the first time in the modern era, there’s a real opportunity for “normals” on both sides of this political detente to parlay the fight against Trumpism to achieve a less toxic political atmosphere in Washington -- to re-establish institutions, to lionize the ideal of compromise and to get back to regular order in Congress.

Wishful thinking? Perhaps. But something good has to come out of this nightmarish Trump crisis, and maybe this is it. Needless to say, there’s no way we as a nation can continue to linger on the precipice of insanity. There’s no way American voters will continue to tolerate the constant off-balance feeling of almost falling over backwards in our collective chair, be it with regards to nuclear war, health care or the clownish indignities of our president.

Likewise, I never thought I’d be a position to root for Senate Majority Leader Mitch McConnell. But it appears as though Trump has decided to make McConnell his “Frenemy of the Week.” You might recall previous frenemies in Trump’s crosshairs. A few weeks ago, it was Jeff Sessions because the attorney general recused himself from the Trump-Russia investigation, and Trump basically admitted that Sessions was nominated exclusively in order to obstruct the probe. Then there was Trump’s own national security adviser, H.R. McMaster, who was attacked over the situation in Afghanistan, as well as over the feud between McMaster and splotchy contortionist Steve Bannon.

This week, the president has decided that McConnell can be badgered and humiliated into doing whatever the hell Trump wants him to do. After a few weeks of Trump needling Senate Republicans to continue smashing their faces against the brick wall of Obamacare, McConnell characterized Trump as a greenhorn who doesn’t understand the Schoolhouse Rock basics of democracy. “Our new president, of course, has not been in this line of work before,” McConnell told a CNN affiliate. “I think he had excessive expectations about how quickly things happen in the democratic process.”

After seeing McConnell’s statement on television, Trump posted a series of tweets this week, including this one:

When I read this, I found myself cheering for McConnell to bludgeon Trump in retaliation, and I cheered with the same vigor with which I rooted for Sen. Ted Cruz last year to verbally nuke Trump for ridiculing Cruz’s wife. It’s like Loki from the Marvel comic-book universe. We couldn’t wait for Hulk to get his hands on the Avengers' main villain, chiefly because Loki so brazen and so completely insufferable. McConnell hasn’t responded publicly yet, but I’d wager his response will be best served cold.

So Trump sat around his vacation resort in Bedminster, New Jersey, perhaps gorging on chocolate cake while soaking in a garish Tony Montana-style hot tub and hectoring the majority leader to “get back to work” doing Trump’s bidding. I’m not the only one who’s wondered whether the president thinks Congress works for him, but it really doesn’t matter. You simply don’t make a habit of bossing around your party’s Senate majority leader, especially when an eventuality like impeachment will put Trump’s political and legal fate predominantly in the hands of, yes, the Senate majority leader.

Hence the aforementioned possibility of revenge “served cold.” Furthermore, Trump is sending a signal to other GOP allies that literally anyone is fair game, and they could well be next. How willingly do you think congressional Republicans will go along with Trump’s whimsical commands, in the mode of a bad tipper at TGI Friday’s, understanding he could turn on any of them at any moment? By the way, it’s not just Trump who’s doing the attacking, it’s Trump and all of his disciples (check the replies here and here), making the harassment even worse -- and with it the counterattacks, when and if they emerge.

If there’s one thing we know for certain in this era of the Mad King, it's that Donald Trump absolutely loves chaos and infighting. He manufactures it and then basks in it. This is the host of “The Celebrity Apprentice,” after all, and one thing the president well understands is how to instigate slap-fights between people like, say, Gary Busey and Meat Loaf. The problem for Trump is that this isn’t a reality show. It’s the high-stakes world of national politics, and he's pissing on the wrong legs.