Celebrating a decade of disgust with Tim and Eric

With “Awesome Show,” Tim and Eric pushed gross-out comedy into the realm of true transgression 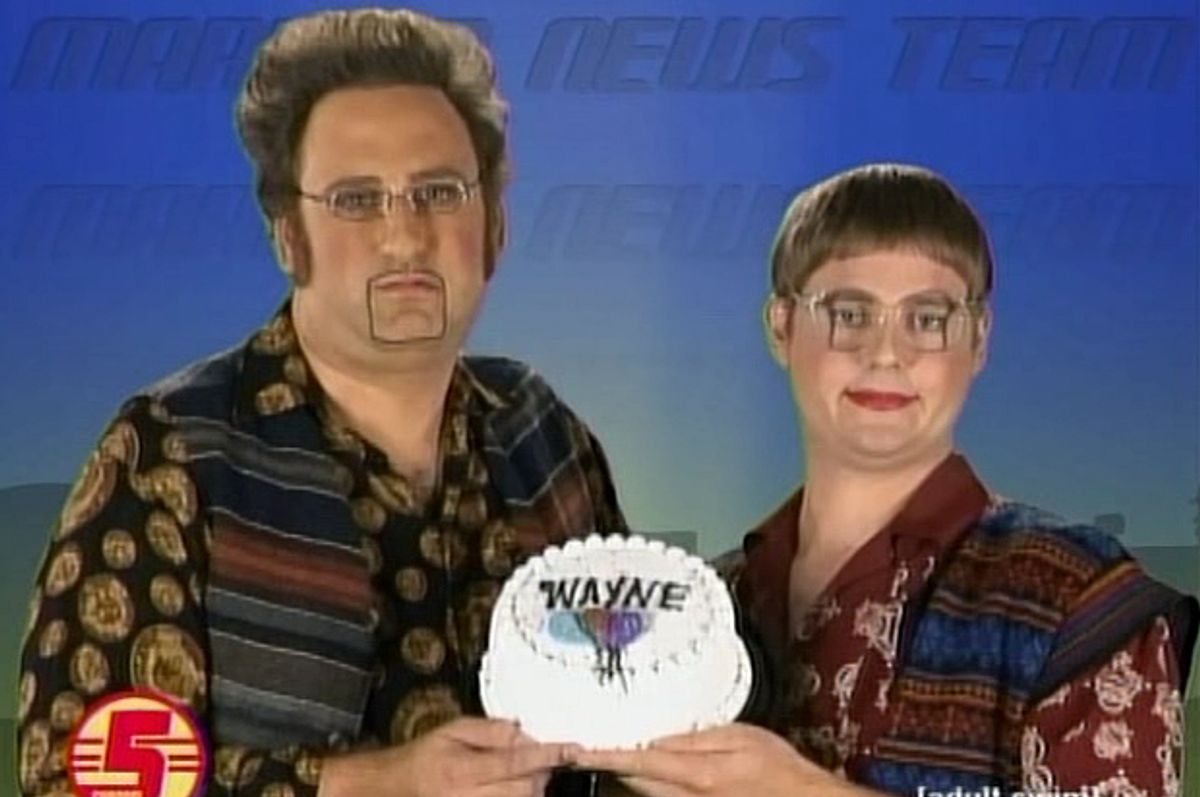 Earlier this year, The Guardian’s Gwilym Mumford declared the days of the gross-out comedy numbered (or, to use a Britishism worthy of Mr. Mumford’s name, they’re “going down the pan”). But in the mid-‘’90s, the scatological shocks of movies like “Ace Ventura: When Nature Calls” (in which a sweaty Jim Carrey passes through the anus of a robotic rhinoceros) or “Dumb ’n’ Dumber” (in which a lit fart explodes into a hellacious mushroom cloud, and Jeff Daniels befouls a bathroom with nasty diarrhea) were the order of the day. Around the corner lurked the semen-as-hair-gel gag in 1998’s “There’s Something About Mary,” the pastry-porking schoolboy hijinks of 1999’s “American Pie” and the sundry body horrors of Tom Green’s “Freddie Got Fingered” (2001).

Revulsion had become, if not a form of attraction, than certainly a valid form of comic expression, building on the precedents set by movies like “Animal House” (John Belushi’s overstuffed cheeks exploding with half-masticated food), “Caddyshack” (Bill Murray eats a turd that’s really a candy bar) and 1983’s “Vacation” (Chevy Chase bites into a sandwich that has been soaked with dog piss). Like the snowballing shocks and violence of horror films, which eventually settled into scenes of extended torture unmoored from anything resembling a plot, it was a game of escalation.

It was an idea that found its purest comic expression in the new millennium, not in mainstream Hollywood comedies but in the oddball annals of late night cable television. With the arrival of the cumbersomely titled “Tim and Eric Awesome Show, Great Job!” gross-out comedy reached its conceptual apex. With the duo now in the midst of a 10th anniversary “Awesome Tour,” it feels appropriate to pay tribute to two undisputed masters of the comedy of disgust.

When it premiered on Adult Swim way back in 2007, “Awesome Show” was unlike anything. (In many ways, it still is.) It mixed surrealist sketch, pitch-black comedy, jokes about dads, fake advertisements, alienating deadpans from actors hired off Craigslist, tinny musical numbers, and glitchy, faux-analog editing rhythms that seemed like the result of a way-outdated Final Cut Pro gaining sentience then immediately suffering a super-charged schizophrenic break.

In the middle of the manic swirl were Tim (Heidecker) and Eric (Wareheim), two real-life film school buddies playing vacant, cartoonishly clean-cut versions of themselves. Like its most direct comic antecedent, HBO’s late-night ’90s sketch series “Mr. Show” (whose co-star, Bob Odenkirk, was instrumental in shepherding Heidecker and Wareheim’s early careers), “Awesome Show” had a loose, “let’s-put-on-a-show” premise. Tim and Eric would introduce the episodes, stammering through line-readings, subject to intentionally shoddy production values. But the sketches, songs and videotaped descents into the fathoms of the freaky and surreal exceeded this setup, alternating between the baffling, the hilarious, the nightmarish and the unnamable.

More than anything, “Awesome Show” was gross. In one sketch, a parachute-panted dancer named Pierre sang about spoiled meat. In another, Heidecker and Wareheim (playing lonely business-types) slathered their disgusting mouths with sloppy chicken wings, their podgy faces covered in splatters of hot sauce and blue cheese. A fake commercial advertised a candy designed to be suckled off braids of human hair. A different fake commercial featured a mild-mannered mattress wholesaler (Will Arnett) whose dreams are wastelands of sloshed blood, splintered bone and deep pools of human viscera.

An annual ritual saw seasons kick off with feces-related commercials (among them: The Poop Tube, a kind of pressurized sousaphone that funneled excrement from the, ugh, hindquarters, and shot it out into a urinal). In their 2012 feature film spinoff, “Tim and Eric’s Billion Dollar Movie,” a spiritual healer played by the rapist dad from “Twin Peaks” submerged willing apostles in bathtubs full of diarrhea. All baser functions were fair game, rendered with wet, whoopee-cushion splats. All faces were sweaty and slimy and stained with acne and alopecia, chins on top of chins like rubbery stacks of pancakes. Eating was disgusting. The aftermath was worse. All food (to quote an “Awesome Show” ditty sung by a chorus of cheery preteen girls) was poison. Even the made-up character names — Corby Tender, Dick Dousche, Doug Prishpreed, Whette Fartz, Dr. Bill Phlemn — were earthy and gross.

Tim and Eric were tenured profs in scatology who carved out a greasy legacy of disgust. “Awesome Show” was revolting. And it was hilarious.

“Awesome Show” didn’t so much one-up the semen-drinking, pie-breeding, horse-masturbating gross-out comedies of the ’90s and early 2000s. It obliterated them. Excrement, ejaculate, tears, blood, sweat weren’t used as gags or stunts, but as the fundamental elements of the demented comic world the duo created. This indulgence of grossness directly corresponded to the show’s funniness, and its legacy. Laughter, like vomiting or soiling one's pants, is an expression of pure affect: the body exceeding our ability to control it (or “the body beside itself,” in the words of film scholar Linda Williams). Jokes like “The Poop Tube,” or the image of a high-strung mattress salesman exploding in psychotic rage, are eruptions of excess, like laughter itself.

What differentiated “Awesome Show” from the preceding crop of gross-out comedies was the way it supplanted our disgust with laughter. When Cameron Diaz runs Ben Stiller’s globs of goo through her hair, or Austin Powers (Mike Myers) gulps down Fat Bastard’s (also Mike Myers) stool sample thinking it's coffee, commenting only “It’s a bit nutty,” we’re meant to be disgusted. We’re supposed to hold our noses, pucker our lips, and register our affronted odium, like Jim Varney’s Earnest P. Worrell moaning “Ewwww-heeeeew.” Ditto Belushi’s “human zit” in “Animal House,” Chevy Chase’s bedewed sandwich in “Vacation,” Tom Green’s udder-suckling, dead-moose-humping man-child foolery, and any number of other gross-out gags. While such films flirt with transgression, by violating social norms regarding acceptability and bodily functions they only end up reinforcing taboos by exhorting our revulsion in turn.

“Awesome Show” radically inflated, and effectively upended, this gross-out tendency in American comedy. Its excesses proved so hyperbolic, cartoonish and deranged that feeling queasy never presented itself as a serious option. All one could do, watching a commercial in which a tube funnels thick excreta from a guy’s butt and shoots it into a urinal, is laugh, uncontrollably, the body given over to paroxysms of uninhibited joy. Combined with the program’s glitchy, basic cable aesthetics, and the way its weirdness cut across the buttoned-down, conservative-seeming, khaki-panted personas of “Tim” and “Eric,” this comedy of disgust made “Awesome Show” one of the last truly transgressive pieces of American television.

This preoccupation with grossness still pervades Heidecker and Wareheim’s post-“Awesome Show” work: in Wareheim’s music videos and Heidecker’s wildly sloppy fake cooking show, and in the extended “On Cinema” universe, where Heidecker’s cocky rockstar version of himself constantly falls prey to aberrant skin diseases. The duo’s newest Adult Swim series, the horror-comedy anthology “Tim and Eric’s Bedtime Stories,” is also rotten with such provocations. One episode casts the two as obnoxious L.A. roommates whipping up goat’s milk and peppermint cappuccinos and muddy, coagulated Bloody Marys. One subplot involves a septic tank full of semen being sucked up by a tornado and sent on a collision course with a children’s hospital. Wareheim, in another episode, plays a seemingly mild-mannered father addicted to eating dirty diapers. But for the most part, the grossness of “Bedtime Stories” is merely intimated, and rarely depicted.

Perhaps the vivid image of a septic tank smashing into a hospital in a sticky explosion rubs up uncomfortably against Heidecker and Wareheim’s own lax standards of good taste. Or maybe Poop Tubes and sticky candied braids and torrents of sweat and spit and blood are just a young man’s game. Rightly or wrongly, it’s easy to regard the mastery of revulsion and taboo-busting as a shtick, and one which doesn’t tend to age well (compare the John Waters of “Multiple Maniacs” and “Pink Flamingos” to the parody of himself apparent in the XXX-rated, self-consciously raunchy sex comedy “A Dirty Shame”).

Still, “Awesome Show” made an indelible, sticky brown stain on the worlds of comedy and television. And as the ongoing anniversary “Awesome Tour” proves, audiences are still hungry to gobble down whatever Tim and Eric are willing to bring up.