Fall TV: The military look is in this season

NBC, CBS and The CW each have dramas about special ops. But being part of a TV trend is dangerous work 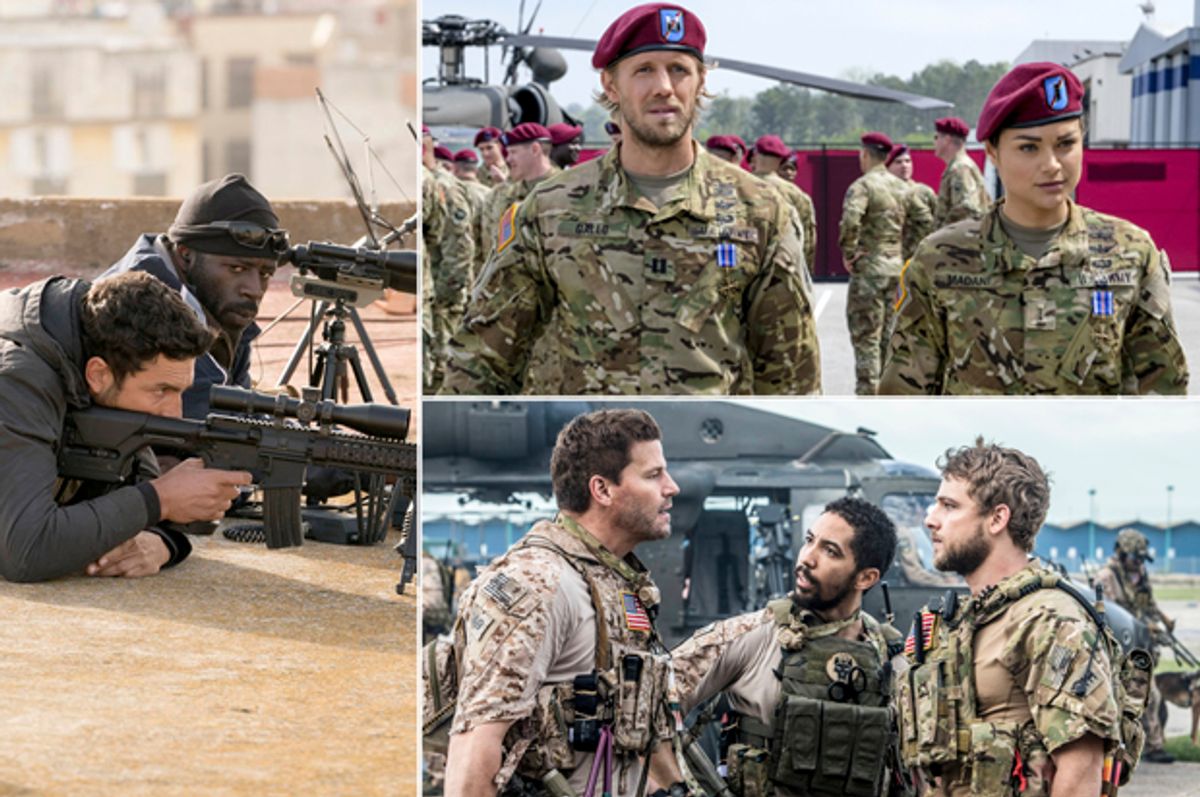 Originally this story was going to dive into the various reasons that there are three military-themed dramas on broadcast television this fall, including NBC’s “The Brave,” The CW’s “Valor” and CBS’s “SEAL Team.” The trades foretold this during pilot season when there were four such pilots in contention, and industry insiders connected this trend to the rise of Donald Trump and the quest to appeal to working-class voters.

“People thought it would be very jingoistic. It’s a military show,” “SEAL Team” executive producer Sarah Timberman recently said at a recent press conference in Los Angeles. “People said ‘We were very surprised. It’s anything but that.’ It feels like it’s about honor and integrity and a shared sense of purpose and common humanity.”

Intellectualizing about the separate motivations and intent of these series would provide some interesting calisthenics for the brain. Perhaps it would enable you, the reader, to comment about liberalism and troop support and maybe even extemporize about the subtle ways that network television subconsciously pushes a politicized agenda upon audiences at large. There are cases to be made on these topics, regardless of what their creators say regarding their motivation for creating these shows.

Here’s what Timberman had to say about the politics of “SEAL”: “It was anyone’s guess where we were going to be politically when we started developing this. I personally thought we would have a different president in office right now. I don’t think our show is about the current moment in politics. I think it’s about something that transcends all of that.”

“Valor” executive producer Kyle Jarrow echoed this in his show’s panel. “Across the political spectrum, there’s a lot of support for our military, but I don’t think there’s always a lot of knowledge about the day to day of what military life is,” he said.

But the reality of it is, viewers will watch “SEAL Team” because it fits in with the action side of CBS’s crime-time schedule, and “Bones” fans will want to see what its star David Boreanaz is doing. NBC viewers will check in on “The Brave,” maybe, to see how much its special ops missions channel the gritty action and dramatic subterfuge at play on “The Blacklist.” And The CW’s viewers will watch “Valor” because… alright, I can’t honestly think of a reason The CW’s target audience would be interested in “Valor.”

Series star Christina Ochoa believes the series will appeal to the network’s female-skewing audience, "having the female element in the forefront, having a female point of view and kind of a new storyline to go with that. I think that, for the most part, [the writers] are very dedicated to giving us authenticity . . . we also have two wonderful veterans, female veterans, in the writers’ room.”

The larger point here is that broadcast television loves repetition, similarity and the recognizable. Familiarity is a sensible business tactic when the goal is to appeal to the widest range of people possible, the literal meaning of the term broadcast — which is why so many “new” shows resemble previous successes, although wearing new clothes and masks.

This means that while “Valor,” “The Brave” and “SEAL Team” each tell stories about special ops teams in slightly different ways, at their core they are closed-ended stories dressed in specific portrayals of bullets and bang and muscularity.

Each of them may appeal in slightly different ways to purported red state voter ideals surrounding bravery and masculinity (and yes, that applies to soldiers of both genders). But if any of them survives, it’ll be because it fits in well with the other shows around it.

Realistically, this assessment is based on what each pilot indicates about what people should expect of the series, which means those of us who have seen these opening episodes are really just making our best guesses about potential for success or failure. Many fantastic shows came into the world on the sled of mediocre pilots, their missions fundamentally changed after their introductory hours.

As much as viewers may complain about the middling sameness of network television, the fact remains that enough people will watch a series if aspects of it resemble something they enjoyed in the past but are different enough to make it feel new.

The creators of these series know that. “One of the inspirations for this show for me was ‘ER,’” said Dean Georgaris, creator and executive producer of “The Brave.” “Frankly, anything John Wells does, you know. And I think back to ’94 when ‘ER’ came out, and I think ‘Chicago Hope’ came out the same year, or a similar time. And I get that there’s room for lots of shows. We’re not worried about standing out.”

Oh, but he should be.

Since the failures of yesteryear are easily forgotten, here’s a reminder that last year’s trend involved time travel. Within one season NBC premiered “Timeless,” ABC’s “Time After Time” came and went, and Fox’s “Making History” failed to stumble upon a dedicated audience. While they were in production a few “what does it all mean” kinds of stories wondered if this strain of sameness spoke to an underlying vibe in the culture. But it didn’t, really. Only “Timeless” remains, and it too was canceled until fan outrage inspired the network to bring it back for a shorter season whose debut date has not yet been announced.

The problem with these come-and-go trends is usually a matter of being too specific and dissimilar, which doesn’t necessarily work on broadcast but fits well on cable, an environment where specificity and uniqueness works. In fact, a person might credit the success of BBC’s “Doctor Who” or “12 Monkeys” on Syfy, and other cable genre series for NBC, ABC and Fox deciding to give time travel a go last year. Similarly, one could view the relative success of History’s “Six” as smoothing the way for the 2017-18’s crop of special forces adventures.

The sum of all of this is: standing out can be desirable. A show needs to be noticed for the right reasons if producers want it to have a chance. But broadcast series carry the burden of striking a careful balance between being noticed and looking like a sore thumb.

Maybe one of these series will find a way to walk that fine line. If that happens, though, its success will have less to do with any perceived notions about America’s worship of military might than with our comfort with recognizable patterns. The average viewer likes to have some indication of what she’s getting into. From there, it’s anyone’s guess as to whether that familiarity will breed affection or contempt.