Pro-choice groups argue that a woman's right to choose is a basic human right, not a political tactic 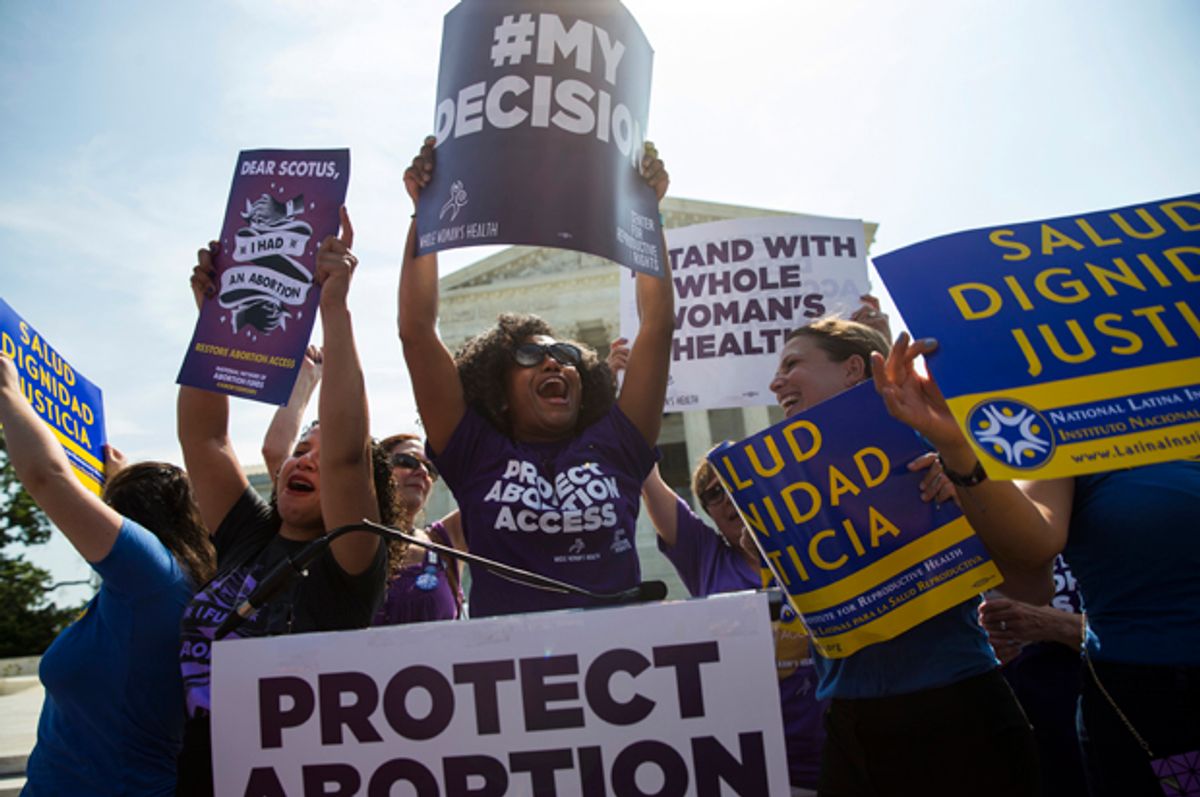 Progressive groups are fighting back by forming a coalition against Democratic leaders willing to fund anti-choice candidates in the upcoming 2018 midterm elections. NARAL, Planned Parenthood and Democracy for America issued a statement of principles arguing that a woman's right to choose is not up for debate in order to win votes from red-state Democrats. The growing debate exposes tension between the modern anti-choice movement, anti-choice Democrats and progressive groups that defend women's reproductive rights.

In recent months, Democratic leaders have revised their stance on whether potential candidates must be pro-choice. On Monday in an interview with The Hill, Rep. Ben Ray Luján, D-N.M., chairman of the Democratic Congressional Campaign Committee, stated that there would be no litmus test for anti-abortion candidates.

“As we look at candidates across the country, you need to make sure you have candidates that fit the district, that can win in these districts across America,” Lujan said.

In a May interview with the Washington Post, House Minority Leader Nancy Pelosi, D-Calif., also said there should be no party litmus test on abortion and that many Democrats aren't necessarily pro-choice.

“I grew up Nancy D’Alesandro, in Baltimore, Maryland, in Little Italy, in a very devout Catholic family, fiercely patriotic, proud of our town and heritage, and staunchly Democratic,” Pelosi told the Washington Post. “Most of those people — my family, extended family — are not pro-choice. You think I’m kicking them out of the Democratic Party?”

However, the coalition is quick to point out that a woman's right to choose is an important moral and economic issue.

“We recognize that over the last decade there has been a massive erosion of access to abortion and attacks on contraception and we cannot back away from this fight without abandoning people and undercutting core constituencies in our base,” says the coalition. This sentiment has been endorsed by Emily’s List, the Working Families Party, Ultraviolet, Demos, the American Federation of Teachers, the Progressive Change Campaign Committee, the Indivisible Project, Social Security Works and Daily Kos, which withdrew its endorsement of Mello after learning of his record on abortion.

But this debate over abortion rights isn't a concrete split in the party. The squabble is a more complex question involving how the DCCC can take back the house so that Democrats have the power to form pro-choice abortion legislation.

Ilyse Hogue, president of NARAL, notes that the media's portrayal of the debate is not accurate.

“The media has been framing this as a split between Democrats, and that’s not what it is... Among the rank-and-file groups that make up the majority of the Democratic base, there is really no split on abortion rights.”

A recent article in Rolling Stone points out that the modern anti-choice movement and a potential pro-choice Democratic candidate have fundamental differences. Pro-choice Democrats, like Joe Biden and Tim Kaine, tend to view abortion as a personal choice, but would never restrict a woman's right to choose. Republicans, on the other hand, seek to legally outlaw abortion.

Hogue sees that the Democrats need to find a new way to frame the abortion question. The progressive coalition and the Democratic Party's positions are actually closely aligned. The only poll on the "litmus test" shows that few Democrats are concerned over whether candidates can hold anti-choice views. In a May poll conducted by YouGov, only 28 percent of Democrats said that candidates should be strictly pro-choice.

Hogue said it could be possible for some Democrats to be anti-choice without interfering with the party's positions on legal abortion.

"You have people like Mario Cuomo who were staunchly pro-life but never voted that way — and who could speak eloquently about why. Sen. Bob Casey [a Pennsylvania Democrat] seems like a nice guy, but he’s winning elections in spite of his pro-life views, not because of them. Voters really respond well to people saying to them, Look, we disagree, but here’s why I hold this position."

This focus on legal restriction is key to the Democratic debate, because as the Democrats squabble, several states have been busy making abortion more difficult for women. The coalition is quick to frame abortion not as a "social" issue, but a human right. Poor women and women of color are especially impacted by oppressive abortion policies.

Meanwhile, the anti-abortion movement continues to pass harmful legislation. Last summer, one of Texas' state laws, which threatened to close a majority of women's health clinics in the state, was found to be unlawful in the Supreme Court case Whole Women's Health v. Hellerstedt. Texas continues to pass lawsthreatening reproductive access. In May, the Texas legislature passed SB 8, banning second-trimester abortions and requiring health care facilities to cremate or bury fetal remains.

Other state bills passed by Republican-held legislatures include requiring pregnant women to view an ultrasound and hear the heartbeat of the fetus, in an effort to change their minds about having an abortion. Conservatives at the state and federal level continue to crusade against Planned Parenthood. The GOP's health care bill would have prevented Medicaid patients from accessing Planned Parenthood clinics.

By not firmly advocating for pro-choice, Democrats also risk alienating their most loyal base: black women. Young black women have the most difficulty finding abortion services, according to a 2017 research study conducted by the National Network of Abortion Funds. So while reverting to 2006 midterm election strategies seems like it could win over red states, Democrats are potentially losing support from black women.

A woman's right to choose is also strongly an economic issue. Wavering on it contradicts the party's new, economic-based slogan: "A Better Deal: Better Jobs, Better Wages, Better Future." Although access to reproductive health services isn't directly included in the message, bearing a child is expensive and also impacts a woman's ability to earn wages. A 2004 survey found that 73 percent of women chose to get an abortion because they couldn't afford to have a child, and another 74 percent thought that having a baby would potentially hinder their education, work and capacity to take care of dependents.

In an op-ed for the New York Times, writer Lindy West echoes the sentiment that abortion is an economic and racial issue, not a topic up for debate in order to win over conservative districts. West writes, "Democratic candidates are perfectly welcome to refrain from terminating their own pregnancies. But to be anti-choice on a policy level is absolutely indefensible from an economic justice, racial justice, gender justice and human rights standpoint. And if the Democratic Party does not stand for any of those things, then what on earth is it?"

The Democratic Party has shown that it's willing to abandon reproductive and economic justice in order to win more seats in the House. But it's important to remember that a woman's right to choose isn't just an economic incentive or a political tactic, it is a basic human right.

The principles endorsed by the coaltion of progressive groups are reprinted here:

As progressives, we know we cannot have a real conversation about economic security that does not include the ability to decide if, when, and how to raise a family; that being able to plan a pregnancy has a powerful effect on educational attainment, career trajectory, and chance to define our own destinies.

As progressives, we stand united in understanding that policies that limit access to abortion and force medically unnecessary procedures are oppressive to women, especially low-income women and women of color.

As progressives, we stand united in the belief that a woman’s autonomy over her own body is not a secondary issue or a “social issue,” but rather a human right and a necessity in order to attain and preserve economic security in her life.

As progressives, we acknowledge that the current economic system is exceptionally punishing of mothers, single mothers, and mothers of color whose wages, job opportunities, and economic advancement suffer due to the “motherhood penalty.”

As progressives, we stand united in our belief that 21st century economic populism must include an understanding of how race and gender affect our economic reality and our economic opportunity.

As a progressive movement, we recognize that over the last decade there has been a massive erosion of access to abortion and attacks on contraception and we cannot back away from this fight without abandoning people and undercutting core constituencies in our base.

As we always have, progressives share our party with people who personally don’t believe that abortion is an option for them. This includes self-identified “pro-life” legislators up until the moment they seek to impose those personal views on their constituents and the country. If they vote to restrict abortion access or contraception access, they then undercut the party platform and they undercut the welfare of women. We strive for and believe in personal evolution and growth so, if they have voted to do so in the past, the burden of proof is upon them through subsequent votes and/or public statements — not in the heat of a campaign — but prior to running for office or reelection.

Thus, as progressives, we know to organize, mobilize, and win elections we must field candidates who understand the integral nature of these core values and bring the full power of our collective base to win.