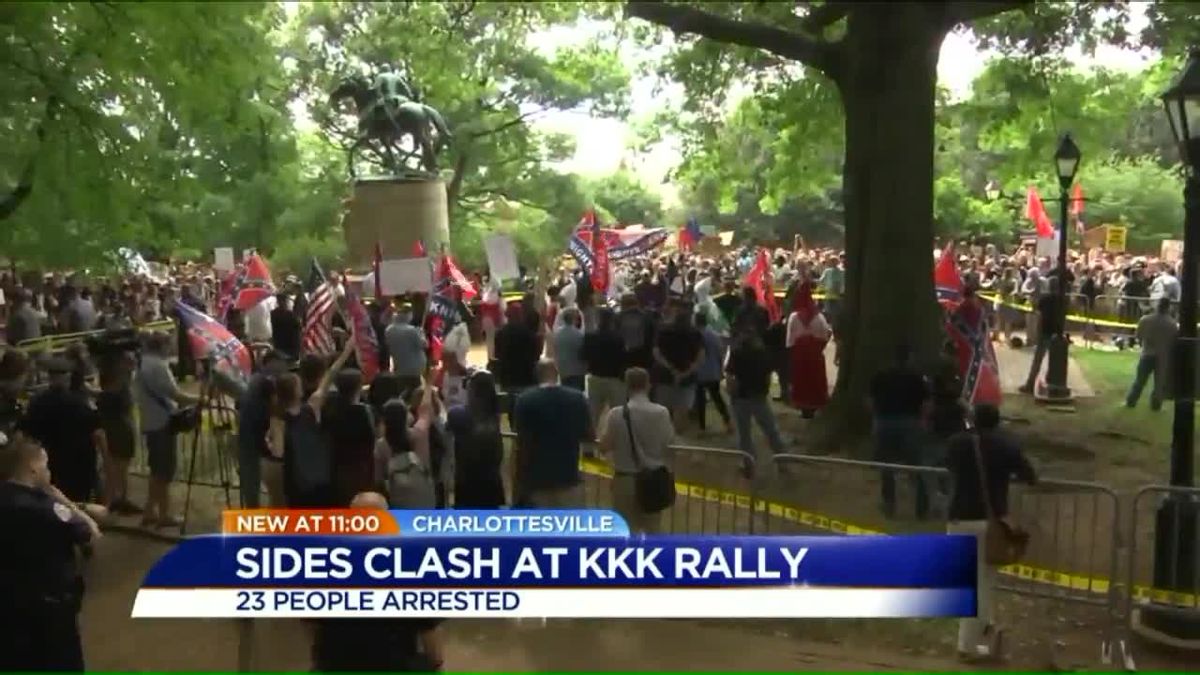 [UPDATED 8 p.m. ET] In what appears to have been a deliberate act of violence, a car plowed into a large group of people protesting against the "Unite the Right" white nationalist rally in Charlottesville, Virginia. One person was reported killed.

After the rally at a city park was dispersed on Saturday afternoon, following a series of skirmishes between competing bands of protesters, a gray sedan drove directly through a crowd of counter-protesters near Charlottesville's downtown mall. According to multiple news reports, Police Chief Al Thomas has said a 34-year-old woman was killed and many other people suffered injuries, ranging from minor to life-threatening. Charlottesville Mayor Michael Signer urged protesters on both sides to go home.

In a video posted to Twitter, the car in question can be seen speeding through a crowd of peaceful protesters, sending people through the air. (WARNING: The footage below contains graphic imagery and profane language that some may find disturbing.)

According to reports from the scene, after ramming another car, the driver of the silver vehicle backed his car up and sped away.

After police in riot gear had dispersed crowds gathered for the "Unite the Right" rally following several violent clashes between white supremacists and anti-racist demonstrators, a group of counter-protesters assembled in Charlottesville's downtown mall, where the vehicle incident occurred. Virginia Gov. Terry McAuliffe, a Democrat, had declared a state of emergency earlier in the day, following the first outbreaks of violence.

The night before Saturday's incident, white supremacists marched with tiki torches through the University of Virginia campus chanting “White lives matter” and “Blood and soil.” Armed white supremacists, led by alt-right celebrity Richard Spencer, have gathered in Charlottesville to protest the planned removal of a statue of Confederate Gen. Robert E. Lee.

“They’re fucking gassing us. The fucking Jew lovers are gassing us, man!” one alt-right protester told Fox News on Saturday.

President Donald Trump condemned the violence on Saturday afternoon, but suggested it had come from "many sides" and did not specifically mention the white supremacists. Nonetheless, prominent racists did not appear to appreciate Trump's comments.