White supremacy in the age of Trump 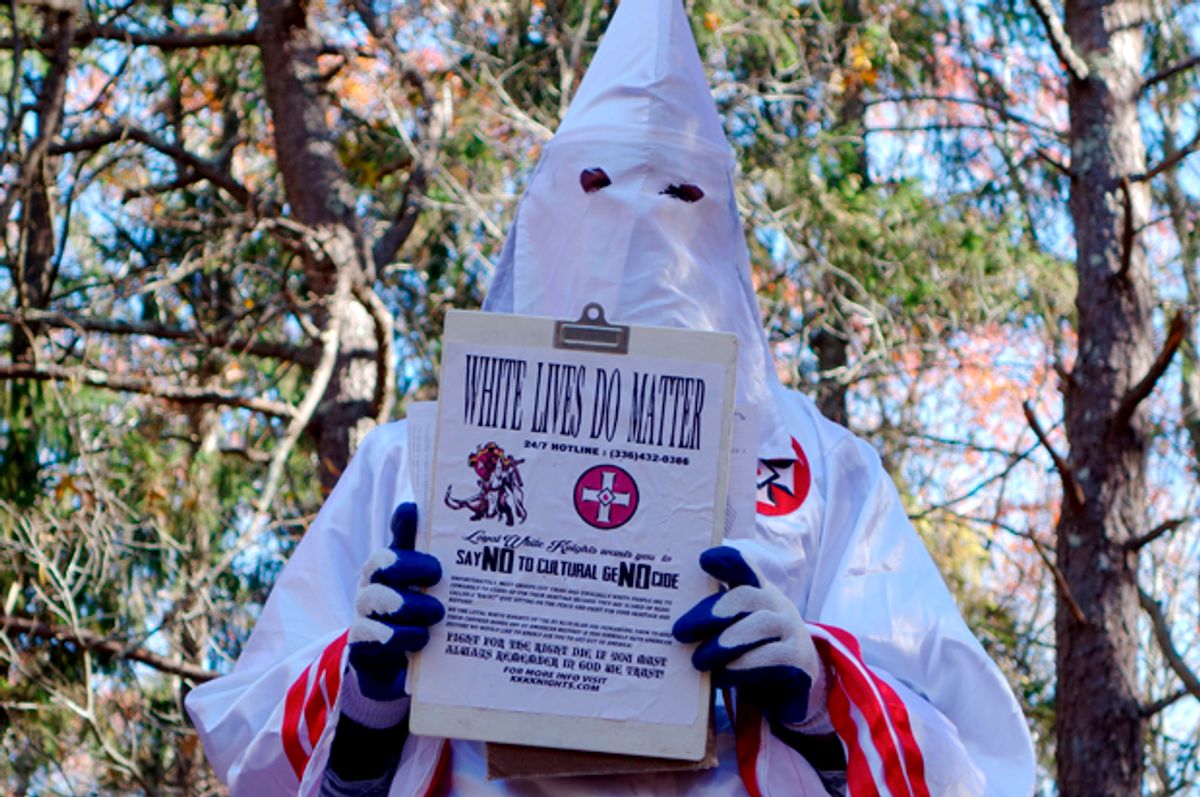 Since before the election, poor white voters largely have been blamed for the rise of Donald Trump. Although their complicity in his election is clear and well established, they’re continually targeted as if their actions are the primary reason Trump won. But in fact, higher-earning, college-educated whites supported him at even greater rates.

It’s quite easy to brand the working class as the most rabidly xenophobic and racist group of whites. Whether they’re brandishing Confederate flags or vociferously vowing to “Make America Great Again,” their beliefs about white supremacy are completely exposed for the world to witness. It’s much harder to see how those atop the economic pyramid not only greatly benefit from white supremacy but actually use racism to their advantage — generally from behind the scenes.

In short, when we hold the working class responsible for white supremacy, other whites are absolved of racial wrongdoing. By allowing the spread of civic ignorance, by propagating historical lies and political untruths, and by engendering an insidious form of racism, upper class whites are undoubtedly just as culpable — if not more so — than working class whites in the quest to maintain white supremacy.

Certainly, there is no apology for the racism of working-class whites, nor any excuse; but we should seek to understand the ways in which white supremacy and power are completely intertwined. Throughout American history, the economic elite have used vile forms of racism to perpetuate the current hierarchy — politically, socially and economically. White supremacy is most commonly conceptualized as a way for lower-class whites to feel socially superior to people from other ethnic backgrounds. More important, though, white supremacy is a tried-and-tested means for upper class whites to grow their wealth and power.

Whether pitting laborers of different races against each other, stoking racial fears through a sensationalistic and profit-driven media or politically scapegoating entire nationalities, America’s white elite have successfully modernized age-old strategies of using racism to prevent the formation of a broad coalition of people along class lines.

To be sure, the concept of white privilege must seem far-fetched to working-class whites who come from generations of cyclical poverty. They constantly are told that African-Americans are the primary recipients of welfare and social benefits, and that policies like affirmative action are greatly detrimental to all whites. By controlling key aspects of the economy, especially education, politics and the media, the white elite often very easily manipulate less affluent whites.

First, by governing and managing the education system in this country, the upper classes remain in control of the equality of opportunity. While much of America is plagued by an underfunded, failing public school system that gets exponentially worse the deeper the area’s poverty, the affluent live in areas with higher property taxes, and thus, better local school systems. Despite this disparity, the rich also are always able to send their children to private (and increasingly, “charter”) schools, escaping the bleak educational realities that most Americans are left to suffer.

As the abolitionist Henry Ward Beecher wrote about the lack of public education in the slave South, “[I]gnorance is an institution. They legislate for ignorance the same way we legislate for schoolhouses.” Today, as Republicans continue slashing education funding at the federal, state and local levels, they legislate for ignorance. They fear statistics and facts, realizing what may follow the political enlightenment of the lower classes. “Knowledge is not only power,” Beecher aptly concluded, “but powder, also, liable to blow false institutions to atoms.”[1]

Second, elite authority over the educational system also means regulation over the teaching of subjects like history, government and civics. An overwhelming majority of Americans have shockingly little understanding of our own past and our own government, often leading to lower-class political apathy.

Third, a small number of extremely wealthy white men control and operate much of the American media. With just a handful of corporations owning the majority of our country’s media, it is worth remembering that news today is essentially a product to be sold, a commodity. Trump himself has created a political firestorm by branding certain news outlets as “fake news,” but the media monopoly obviously presents valid concerns about fair and balanced reporting. Each of the few very powerful, rich men have their own reasons for deciding what qualifies as “news.”

Finally, business owners and corporate leaders have historically sought to keep workers segregated, either physically or by job. Since antebellum times, masters attempted to engender racism between poor white laborers and enslaved blacks, trying to keep each side distrustful of the other. By perpetuating and encouraging a vile form of racism, they attempted to establish psychological segregation, ultimately thwarting the prospect of an interracial coalition. Today, elites use white supremacy as a powerful tool in preventing unionism — as just witnessed with the failure of the United Auto Workers election at a Mississippi Nissan factory.

Thus, even though working-class whites certainly support Trump and his policies, it is important to remember why. Indeed, poorer whites may be the ones branded as hardened white supremacists, but let’s not forget who benefits the most from racism: the white economic elite.

“You are kept apart that you may be separately fleeced of your earnings,” the famous populist leader Tom Watson once told a gathering of white and black laborers. “You are made to hate each other because upon that hatred is rested the keystone of the arch of financial despotism which enslaves you both.” With a few short breaths, Watson had laid bare the most important reason why white supremacy has always thrived in this country, especially during times of severe economic inequality.

Many vestiges of the past — including a long history of upper-class whites using racism to their advantage — have re-emerged in Trump’s America. As our nation impetuously tumbles toward a very uncertain future, we must take heed that the racist rhetoric and divisive political issues have only just begun. The millionaires and billionaires of this country literally have a fortune to protect, and white supremacy has always helped assure their place at the apex of society. As Watson rightfully crowed to his interracial crowd, “You are deceived and blinded that you may not see how this race antagonism perpetuates a monetary system which beggars both.”[2]