Who in the hell is Kayleigh McEnany?! Everything you were afraid to ask about this suddenly important person

The deep dirt on Donald Trump's and the RNC's new mouthpiece, who's bringing your family "Real News" on Facebook 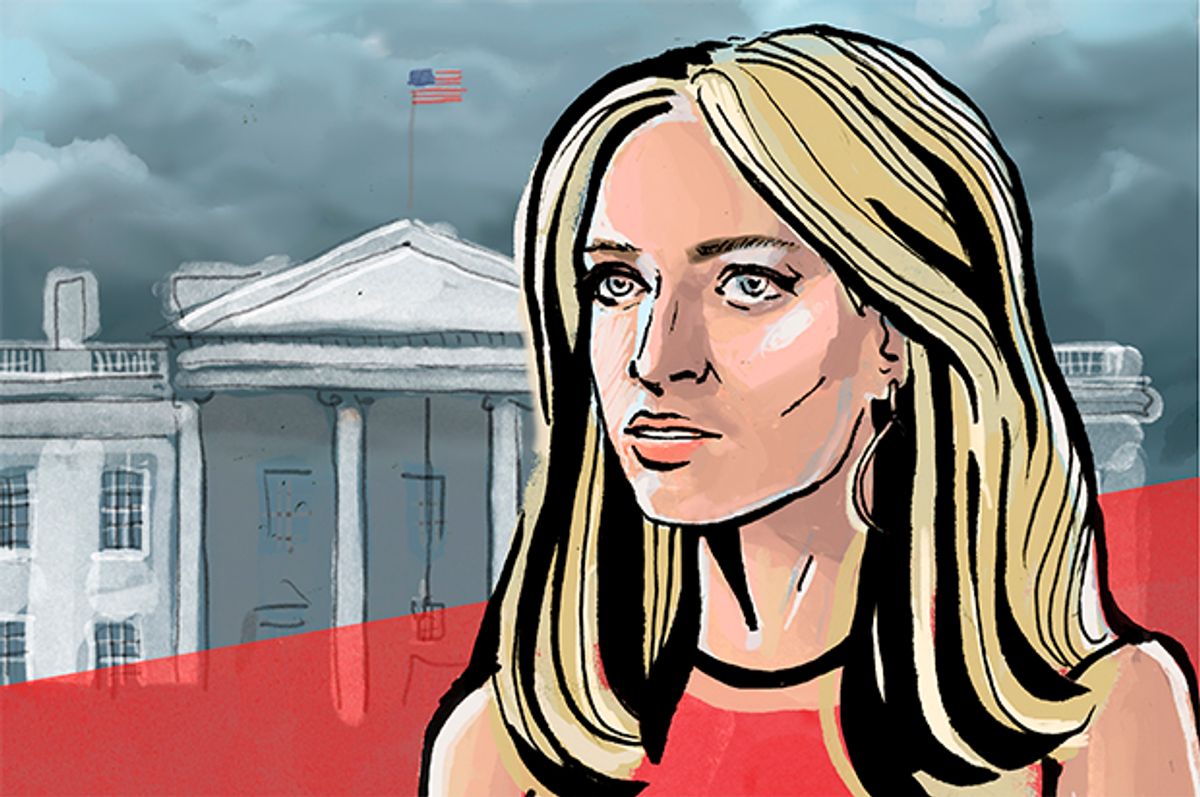 McEnany will be in charge of program development for Trump TV. In less than a week, she has already greenlit four shows: “Deutschebank Bloopers,” “Presidential-ish,” “Law and Order: Covfefe Intent,” and “Wheel of Emoluments.”

Her “Real News of the Week” segment on Trump TV was compared by many to something you might see on the Central News Agency channel in North Korea. That’s a bit far-fetched, of course, because North Korea is totalitarian regime run by an insane manchild with a bad haircut and no self-control whose father set him up . . . oh wait.

FLORI-DUH: McEnany grew up in Tampa and by the age of 16 was carrying around a Ronald Reagan quote book. (Unfortunately, the book was published in 1978, so it was 150 pages of narration from "Death Valley Days," plus 50 pages that just contained the word “mommy.”)

McEnany transferred from the University of Miami Law School to Harvard Law School, where she earned her JD. Don’t kid yourself. You can only make this transfer with a 4.0 average and over 200,000 on JetBlue.

She served in the George W. Bush administration in the White House Office of Communications in Media Affairs and at the State Department in the short-lived Yellowcake Bakery.

JESUS WHIZ: McEnany identifies herself as a Christian conservative, which means she believes the meek shall inherit the Earth after it trickles down from the super wealthy.

Her Facebook profile photo is a cross. However, she lists her relationship status as “Between Saviors.”

THIS WAS CNN: Before going to the RNC, McEnany appeared frequently on CNN defending President Trump whenever Katrina Pierson’s bullet necklace was detained by the TSA or Jeffrey Lord’s mother thought it was too chilly for him to go out.

During a May 2016 appearance on CNN, conservative radio host Dana Loesch apologized for mocking McEnany as being “flat-chested” without knowing three years before she had undergone a preventative double mastectomy. Usually, that kind of remark will get you kicked out of the conservative radio host union. Loesch has yet to apologize for her apology.

PRINT JOBS: McEnany writes regularly for Washington-based outlets Above the Law and The Hill and has contributed numerous opinion pieces to Breitbart, including, “Jews? Good for the Jews?” and “Is a Sundowning Narcissist Technically a Narcissist?”

Since he has taken office, Trump is given two folders of positive news clips every morning. He takes five minutes to read the folders, then deep-fries them and eats them with powdered sugar and Lexapro.

PRESIDENT TRUMP ON MCENANY: “Good guy. Good guy. I mean gal. She’s a gal. She’s a gal. Come on, like I don’t know? I’ve never met her. I heard she loves me. A lot of people are saying she loves me. Everybody is talking about it. I know I say everybody, and one guy will say, you can’t say everybody, but I checked, and everybody, and I mean the entire earth’s population minus Mexicans and the press, a couple trillion people, are talking about how she loves me. Where’s that poll? Why don’t we hear about that? What’s that? You have nothing to say? Yeah, I thought so.

“And I don’t care who hears this, but the fact the people don’t know that this quality broad loves me is a crisis right up there with the opioid epidemic. Do you know the opioid epidemic? I invented it. Before I came to town, nobody heard of it. They weren’t even called opioids. They were called goofballs. Chiclets. Oxy-clean. Vanquish. Marjorie Morningstar. Nobody cared. Now they’re flooding into New Hampshire from the continent of Atlantis. And people are eating them on an empty stomach. That’s what will kill you. Doctors don’t tell you that because Obama cut off the switchboard. That’s how I won New Hampshire by getting fewer votes. Nobody had done that. And that’s what we’re going to do. And it’ll be nothing, and nothing like anything has ever seen.”

WELCOME TO THE SHOW: Kayleigh is engaged to major league pitcher Sean Gilmartin. Gilmartin was signed by the St. Louis Cardinals in June after the Mets designated him for assignment. The assignment: In 250 words, is showering with Latin players a right, a privilege or a violation of NAFTA?

Gilmartin is a fellow Republican and Christian. How Christian? If he ever strains the ulnar nerve in his pitching arm, he has to undergo Matthew Mark Luke and John Surgery.

SPIN PSYCHO: McEnany has described the FBI raid on Paul Manafort’s house as a meter reading. Loyal to a San Andreas Fault, she has already filed an injunction in district court to prevent the raid from being reclassified from “pre-dawn” to “Pre-Don.”