From helping farmers to saving wildlife, here are 7 ways drones are being used for good

First employed as a tool of war, drones are getting an eco-friendly makeover 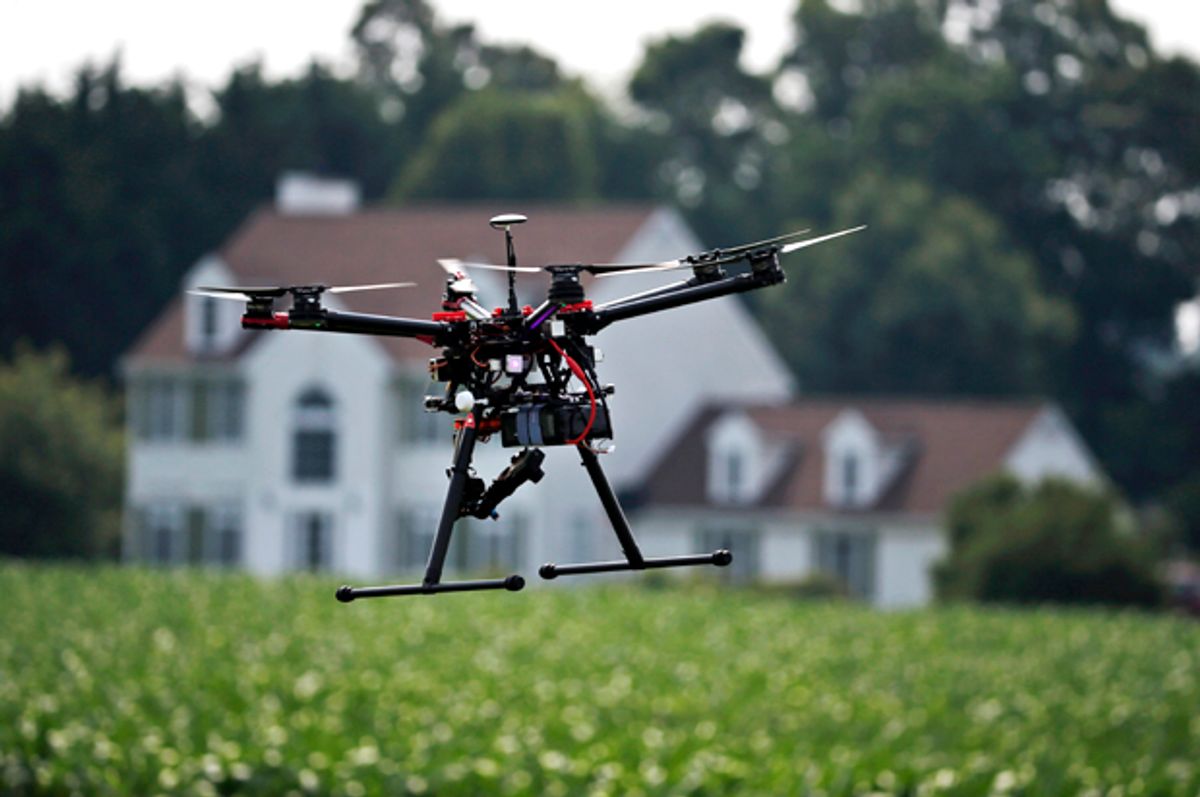 When you hear the word drone, what's the first thing that comes to mind? Probably the fact that they are used by the U.S. military for missile strikes. And that association is giving drone technology a serious PR problem.

Drones were first employed as a tool of war, during the siege of Venice in 1849, when Austrians launched the first air raid in history, using unmanned, bomb-carrying balloons over the Italian city. In 1935, Great Britain launched the first successful unmanned, remote-controlled aircraft. Named the Queen Bee, it appears to have been the inspiration for calling these craft "drones." (Technically, they are known as unmanned aerial vehicles, or UAVs.) Today, drone strikes are a regular tool of the U.S. military in overseas missions.

The entertainment industry has also often highlighted the unwelcome and somewhat sinister elements of drones in storylines, from alien invaders using drones to monitor occupied human cities in the TV series “Colony” to the weaponized drones terrorizing the streets of Los Angeles in the film "Furious 7."

When drones first entered the commercial market, they were pricey, snatched up by rich hobbyists, many of whom seemed content to simply annoy their neighbors with privacy invading flyovers. But the drone is slowly shedding its negative image, thanks to scientists, researchers and entrepreneurs finding new ways to put this developing technology to work for non-lethal—and much less annoying—reasons.

Here are six ways drones can help protect — and even save — the environment.

The famous "last mile" logistical problem — the final leg of a supply chain that gets the product to the consumer — has preoccupied Amazon founder and CEO Jeff Bezos, who wanted to get packages to his customers economically and without adding on a shipping charge. "One memorable fever dream involved storing products in the homes and apartments of local bike messengers in major cities," writes Bloomberg's Brad Stone.

Bezos now has his solution: parcel delivery drones. These automated delivery drones would not only help Amazon's packages arrive on time and in a cost-effective manner, they could have a powerful environmental benefit by reducing the carbon emissions associated with trucks.

A new study by researchers at the University of Washington found that drones have less of a carbon impact than trucks for delivering packages in certain circumstances, particularly if the distance isn't too far, the route has few stops and the packages are small and light.

"Flight is so much more energy-intensive — getting yourself airborne takes a huge amount of effort. So I initially thought there was no way drones could compete with trucks on carbon dioxide emissions," said senior author Anne Goodchild, a UW associate professor of civil and environmental engineering. "In the end, I was amazed at how energy-efficient drones are in some contexts. Trucks compete better on heavier loads, but for really light packages, drones are awesome."

In addition to replacing some truck deliveries, drones could deliver small packages you might otherwise have to use your car to get, like groceries or pizza. Eventually, the impact of drones will be felt across several areas of transportation, resulting not only in lower carbon emissions, but in improved air quality.

Outside the U.S., drones have been successful delivering food, mail and medicine. It might take a little while for the U.S. to get there. While the Federal Aviation Administration recently established the legal space for drone experimentation, official authorization for commercial operations is still far off.

Over the past decade, illegal logging has destroyed nearly 3,000 square miles of the Brazilian Amazon every year. In the Peruvian Amazon, the figure is closer to tens of thousands of square miles.

For local authorities and conservationists, preventing such operations — many of which are part of organized crime rings — is a difficult task, as the logging often occurs in remote parts of rugged terrain.

But drones are helping level the playing field. The Amazon Basin Conservation Association's Los Amigos conservancy concession, for example, uses two small drones to monitor the Los Amigos conservation land trust located in Peru's Madre de Dios region. With only five rangers to patrol 145,000 hectares (550 square miles) in a dense jungle with no paved roads, defending the region is made much easier with the deployment of a pair of camera drones, allowing the team to respond quickly to reports of deforestation.

"We can go straight to the point, not just walking everywhere trying to find it in the forest," said Carlos Castaneda, the trust's coordinator. They’ve already found evidence of both illegal logging and mining.

Wild elephants are particularly sensitive to encounters with humans. Sometimes elephants migrate out of protected parks in search of food and wind up on private farmland. In efforts to preserve their livelihood, farmers often retaliate with aggressive measures, hurling firecrackers at elephants, poisoning them, or merely taking a blind eye to the poachers who hunt the animals for their ivory.

Rangers have been successfully using drones to herd elephants away from farmlands and communities. Like humans, elephants don't like the noise drones create and so are easily herded by them. The buzzing sound is put to good use to keep elephants in the parks, away from harm and safe from poachers.

"The greater interaction distance the UAVs provide lends a much-needed safety buffer for our rangers, the farmers and the elephants," said Angela Mwakatobe, head of research management at the Tanzanian Wildlife Research Institute and a co-author of a paper about the use of drones to protect elephants in Tanzania. "Here is a useful piece of technology we didn’t have in our tool kit one year ago."

In addition to being anti-poaching tools, drones have been successfully used to measure wildlife populations around the globe, from rhino populations in India to black bears in Minnesota.

In addition to being able to keep some vehicles off the road, which reduces air pollution, drones can be used effectively to measure air quality, including measuring and analyzing ozone levels, the radiation following nuclear accidents and the ash cloud after volcanic eruptions.

And not all drones are airborne. Oceanographers, climatologists and marine biologists are using underwater drones to measure sea levels, marine populations, ocean acidification, coastal erosion and assess the health of marine mammals.

Currently, NOAA scientists are using unmanned ocean vehicles called Saildrones to analyze places such as the Arctic and the tropical Pacific that are difficult to access. These water-based drones will help them understand how oceanic changes impact the weather, climate, fisheries and marine mammals.

Cannon Michael is a farmer who grows tomatoes, melons, carrots, onions, cotton and almonds at Bowles Farming Co. near Los Banos, 120 miles southeast of San Francisco. He's keenly aware of how climate change has affected water supplies. Like some other drought-stricken farmers, Michael has turned to drones to detect water irrigation leaks across his fields.  "I've always been a big fan of technology," he said. "I think it's really the only way we’re going to stay in business."

One study suggested California wine production could plummet as much as 70 percent by the middle of the century due to rising temperatures associated with climate change. Some winemakers, like Jackson Family Wines in Sonoma County, are relying on drone technology to help. The Jacksons are monitoring their vineyard with drones armed with sensors that evaluate the colors of the plants to detect moisture. The wrong color can mean leaks in the irrigation or that the crops are missing key nutrients.

Because they are sprayed across entire agricultural fields, more than 98 percent of sprayed insecticides and 95 percent of herbicides impact something other than their target species. Runoff can carry these toxic chemicals far beyond the fields, to aquatic environments, animal grazing areas and other areas, where they can sicken or kill a host of other species.

Drones outfitted with multispectral cameras can help limit runoff by measuring the health of crops through photographs that reveal things the human eye does not.

The Economist reports that Makani, a startup acquired by Google in 2013, "reckons a single energy kite can generate 50 percent more electricity than a single wind turbine while using only 10 percent of the materials."

As with all forms of technology, it’s not all butterflies and unicorns. We don't appreciate the drones that spy on us or simply invade our space. Aside from causing these obvious downsides for the general public, drones can also be disruptive to other species.

Wildlife may experience increased stress when they see a camera drone in the sky. A 2015 study on black bears in the U.S. showed that the animals experienced increased heart rates when drones flew over. Drones can cause herds of animals to scatter, separating mothers from babies. And birds have been known to injure themselves in midair collisions with drones. Hopefully the technology and its implementation will evolve to reduce these negatives.

In the meantime, drones are here to stay — hopefully to do more good than bad. As prices go down and there are more inexpensive drones to choose from, environmentalists, conservationists, scientists and entrepreneurs will surely devise many more ways that drones can help the environment.

Drones may have gotten a bad rap, but they aren't essentially bad. As British philosopher and politician Jeffrey Sacks observed, "Technology gives us power, but it does not and cannot tell us how to use that power." By being put into service to help farmers and scientists in myriad ways, the power of drone technology is becoming an important tool for doing good.